Follow
Home » Science » What is Mastodon? Everything you need to know about Twitter's rival

What is Mastodon? Everything you need to know about Twitter's rival

Ever heard of Mastodon? Hundreds of thousands jump the Twitter ship and sign up to ‘decentralized’ rival following Elon Musk’s takeover

Mastodon – named after the extinct elephant-like mammal – is a free, open-source social media platform for Android, iOS and desktop.

Mastodon has microblogging features similar to Twitter but describes itself as a ‘decentralized’ alternative that doesn’t have ‘a single company monopolizing your communication’.

It’s also quickly gaining followers – according to Mastodon, it now has more than 655,000 users, around 230,000 of which have joined in the last week.

It also gained more than 70,000 new sign-ups alone on October 28, the day after Musk finalised his $44 billion takeover of Twitter.

Here, MailOnline takes a look at how Mastodon works and what setting up an account really involves. 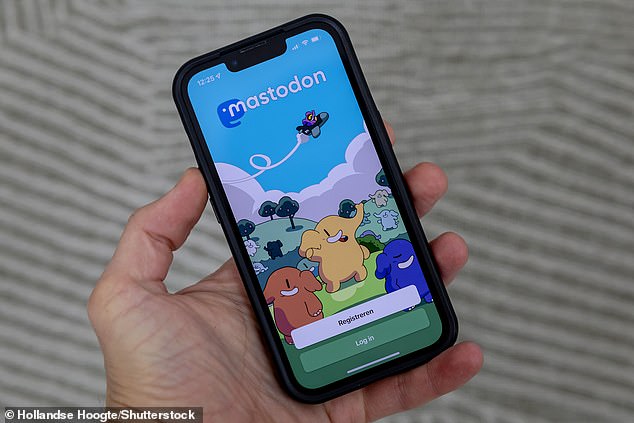 Twitter users are switching in large numbers to the alternative social media platform Mastodon. Pictured is Mastodon’s app on a smartphone 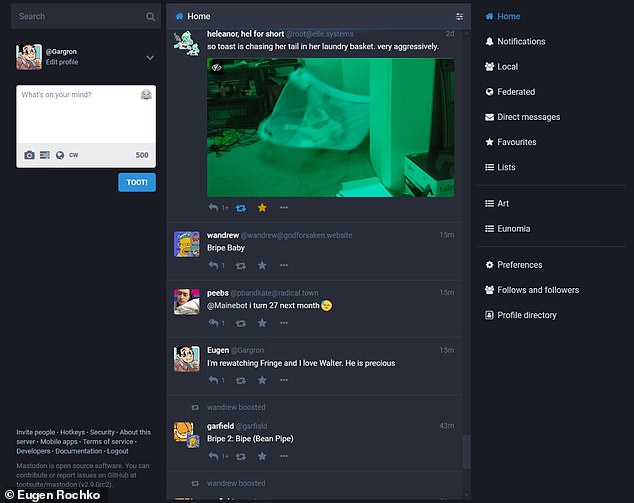 Pictured is the user interface of Mastodon, the free, open-source platform founded in 2016 by German Eugen Rochko

Mastodon claims to offer ‘a vision of social media that cannot be bought and owned by any billionaire’ – a pointed dig at Twitter owner Elon Musk, who is the richest person on the planet with a net worth of more than $210billion (£180billion).

It’s a free, open-source platform that has a user interface and microblogging features similar to Twitter, although how it works is more akin to email.

Mastodon is not a single website like Twitter. It is a network of thousands of sites, called ‘servers’ (also known as ‘instances’) – independent communities that can set up their own guidelines.

Mastodon is decentralized, meaning there is no single person, company or sever running it, so it is seen by fans as a more democratic alternative.

It was launched in March 2016 by a young German software developer called Eugen Rochko (born 1993), who wanted to give users more control over what they see and how content is moderated.

‘I was a Twitter user for a long time, and I really like the format,’ Rochko told Esquire in 2018.

‘I wanted to continue using the same format, but I wanted it to be intimate and for other people to have more control.’

Mastodon users can also favourite other people’s toots and repost them on their profile (known as ‘boosting’ rather than retweeting).

WHICH CELEBRITIES ARE ON MASTODON?

Twitter seems to be full of posts from renowned users about how they’ve just set up their Mastodon account.

One of whom is American comedian Kathy Griffin, who was suspended from Twitter after impersonating new CEO Elon Musk.

On Mastodon, Griffin said Musk was ‘melting down on Twitter because of me’, calling him a ‘drama queen’. 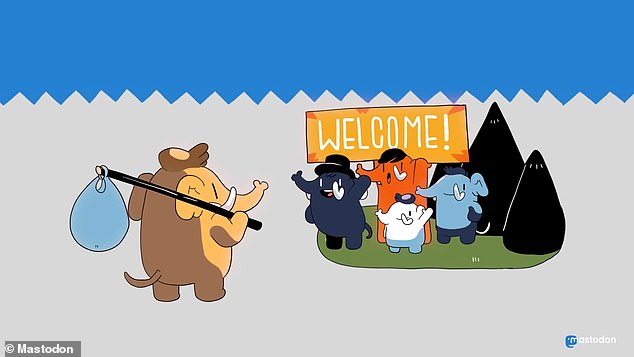 Mastodon – named after the extinct elephant-like mammal (depicted here in this promo shot) – is decentralized, meaning there is no single person, company or sever running it 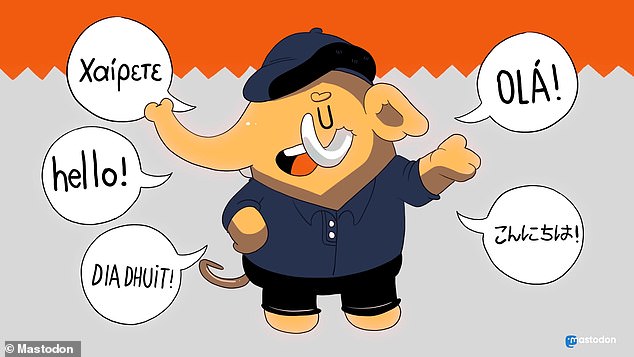 (These are a few examples of Mastodon servers, but there are more than 3,500 said to currently exist)

Instead, Mastodon is a network of thousands of sites, known as ‘servers’ or instances.

According to Mastodon, if it were a single website like Twitter, ‘it would be doomed to recreate all that you hate about the social media platforms you’re trying to leave’.

WHAT ARE MASTODON SERVERS?

Servers are simply the different communities that make up the massive network that is Mastodon.

When joining Mastodon, the first step is choosing a server that lets you connect with other people across the platform.

These servers are themed, so you should pick one based on your location or your interests, whether it’s gaming, football or music.

You can follow any other person on the whole network, regardless of where their account is hosted and if it’s on another server.

You will see their posts in your home feed, and if they follow you, they will see yours in theirs.

Whichever server you’re on, you can still interact with users across different servers. For this reason, Mastodon has been compared with emailing people even though they’re on a different email server (Outlook, Gmail, Hotmail, and so on).

Every server is operated by an independent organization or individual – and therefore it may differ in its moderation policies. 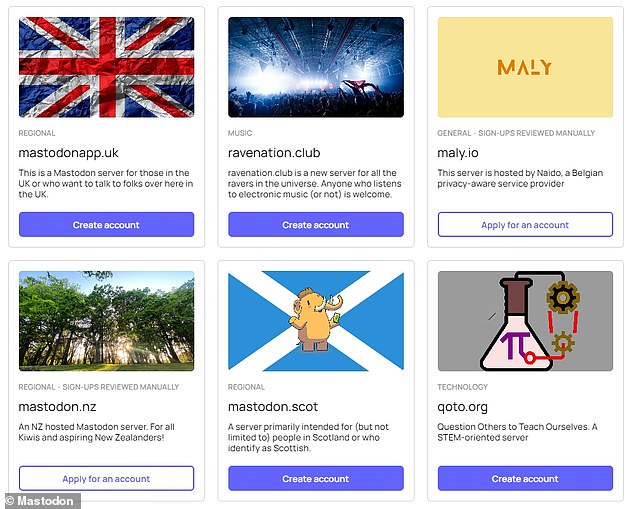 With some Mastodon servers, you have to request permission to join, while in others you can sign up straightaway. Others aren’t currently available to join. Pictured, Mastodon servers

Experts at VPNOverview used Google Trends to establish search increases over the past week since Musk’s $44 billion (£38 billion) takeover.

Globally, searches for ‘How to delete Twitter’ surged by 500 per cent in the past week, from October 24 to October 31, the firm found.

Everyone can also set up and run their own Mastodon sever, getting ultimate control over its rules and policies.

The original or ‘flagship’ server on Mastodon is mastodon.social. When you visit the Mastodon website, this server is the landing page.

However, it’s not currently possible to create an account on mastodon.social, so new users have to find another server.

With some servers, you have to request permission to join, while in others you can sign up straightaway.

DOES MASTODON HAVE USERNAMES?

Mastodon does have usernames, although they’re a lot more nuanced than the simple ‘handles’ that are found on Twitter.

Mastodon usernames actually consist of two parts – the local username (e.g. alice) and the domain name of the server the account is on (e.g. mastodonmusic.social).

A Mastodon username therefore kind of looks like a cross between a Twitter handle and an email address (e.g. @[email protected]).

When sharing your username with other people, you’ll need to include the domain or they won’t be able to find you.

What’s more, you can easily move your Mastodon profile to a different server at any time without losing any followers.

DOES MASTODON HAVE ADS?

Unlike Twitter, Mastodon does not have adverts, nor does it track users’ data to sell to advertisers.

Because of this, it has to rely on donations and crowdfunding. Some servers also ask for donations from users who want to join. 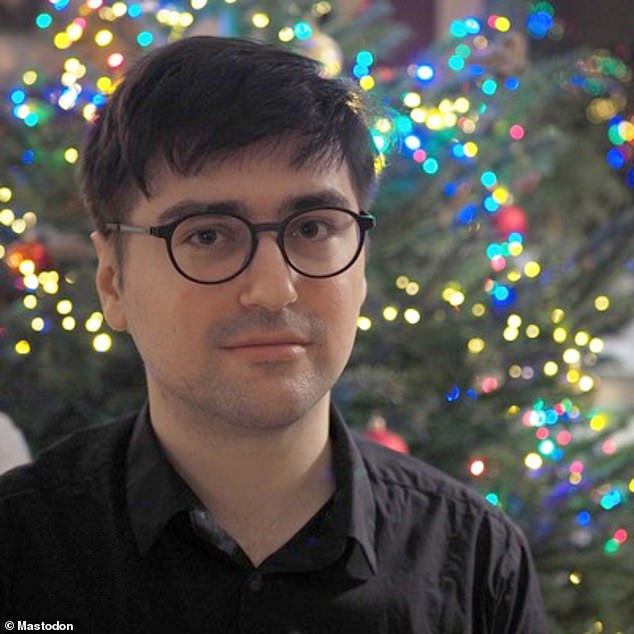 Multiple Twitter users have posted that they’ve been losing followers since the $44 billion (£38 billion) takeover was completed on Thursday.

It’s possible people are losing Twitter followers – described as ‘The Great Purge’ by one user – because users are deactivating their accounts in protest at Musk’s purchase.

Another possibility is that Musk has already got to work at reducing the number of bots on the platform, said to make up five per cent of all user accounts.

Mastodon says: ‘We present a vision of social media that cannot be bought and owned by any billionaire.

‘Your ability to communicate online should not be at the whims of a single commercial company!’

HOW IS MASTODON MODERATED?

While Twitter has a team of moderators at its company HQ, Mastodon uses a system where moderation is controlled by the owner of each server.

Because of this, the likelihood of being banned and booted off a Mastodon server depends on who’s moderating it and what their policies are.

Not only can server owners block users, but they can block whole other servers too, meaning they won’t be visible within their server.

Allowing an individual server to limit or filter out undesirable types of content is allegedly what makes Mastodon a more harmonious experience than Twitter, reducing the amount of ‘hate speech’ and giving the power of moderating to users rather than staff.

However, as Mastodon grows in popularity and user counts, it’s possible that moderation for certain servers may have to come from an exterior source if a server owner makes bad decisions, or just doesn’t care about moderating against harmful content.

Whether the regular people who run Mastodon servers make appropriate moderators could become a hot topic in the near future.

Mastodon has benefitted from a wave of publicity because the way it functions is so different from Twitter, but other platforms may benefit from the takeover.

Former US President Donald Trump has already created his own social media platform, called Truth Social, which presents an an ‘uncensored’ alternative with more of a focus on free speech.

Trump founded the platform in 2021 after he was banned from Twitter following his role in last year’s attack on the US Capitol.

Mastodon has already revealed a rise in user numbers – and it may be benefiting from a wave of outrage following Musk’s controversial actions.

It’s already known that Twitter users have been threatening to delete their accounts in protest at Musk and his initial shake-up of the platform, although whether they follow through with it is a different matter.

Since becoming owner, Musk – who also runs Tesla and SpaceX – has wasted no time making significant changes to Twitter, including firing top execs and dissolving the board of directors. 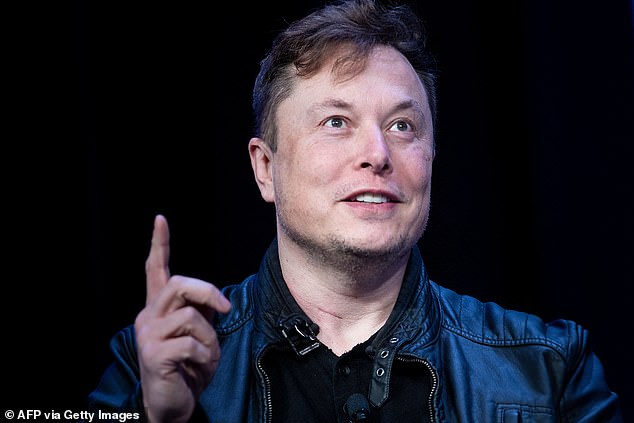 Elon Musk, the world’s richest person with a net worth of more than $210billion (£180billion), completed his purchase of Twitter on Thursday following protracted legal battle and months of uncertainty 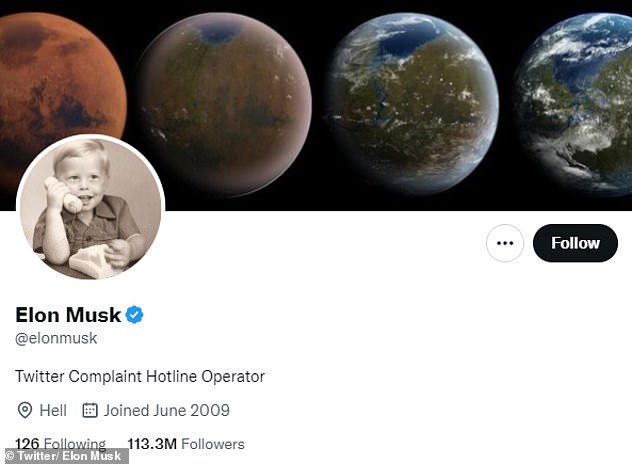 Musk is going to make Twitter users pay $8 per month to have a blue tick next to their account name, calling the current ‘lords and peasants’ system ‘bulls**t

He’s also confirmed going to make Twitter users pay $8 per month to have a blue tick next to their account name, calling the current ‘lords and peasants’ system ‘bulls**t’.

He has also reportedly brought more than 50 of his Tesla staff who were mostly working on the electric car company’s autopilot team to review and work on code for Twitter.

April 2: Musk announces that he owns 9.2 percent of the company, making him its largest single shareholder

May 13: Musk says Twitter deal is on hold pending a review of bot accounts

May 26: Musk is sued by Twitter for stock manipulation during takeover

July 8:  Musk says he’s backing out of the deal. Twitter sues, trying to force him into seeing it through.

October 4: Musk proposes again to go ahead with the deal at the original price

October 26: Musk visits Twitter HQ with a sink, updates his bio on the site to ‘Chief Twit’ and sets his location to Twitter HQ

October 31: Musk confirms he’s the new CEO of Twitter and dissolves the board of directors