The young woman buried in a CANOE: Scientists discover an unusual burial in Argentina dating back 800 years – and believe the boat was intended to help her on her journey to the afterlife

The remains of a young woman have been discovered buried in a canoe, or ‘wampo’ in Argentina.

Researchers from Universidad Católica de Temuco say the woman, dubbed Individual 3, was buried approximately 800 years ago, and that the boat may have been intended to help her on her journey to the afterlife.

‘Burial in a wampo, as given to Individual 3, is a metaphor of the dead soul’s transition or voyage down rivers and across the sea to its final abode,’ the researchers wrote in their study, published in PLOS ONE.

The remains of a young woman have been discovered buried in a canoe, or ‘wampo’ in Argentina 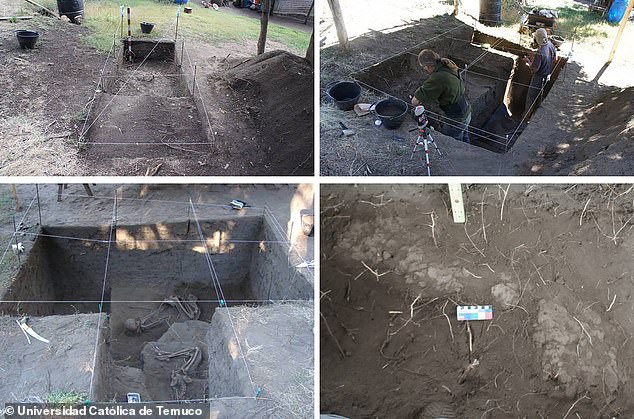 Researchers from Universidad Católica de Temuco say the woman, dubbed Individual 3, was buried approximately 800 years ago and believe that boat may have helped her on her journey to the afterlife

Who are the Mapuche?

Mapuche is the most numerous group of Indians in South America.

Most inhabit the Central Valley of Chile, south of the Biobío River.

Historically known as Araucanians, the Mapuche were one of three groups—Picunche, Mapuche, Huilliche—identified by Spanish ethnographers.

All Araucanians now identify themselves as Mapuche.

The remains were found at a dig site called Newen Antug, near Argentina’s Lake Lacar.

An analysis reveals that the woman was between 17 and 25 years old when she died, although the cause of her death remains unclear.

Wooden canoes, or wampos, were hollowed out using fire, which could explain why the wooden pieces were charred, according to the researchers.

Using radiocarbon dating on the bones, the researchers suggest that woman died in approximately 1142 AD.

This means she was likely a member of the Mapuche culture – the most numerous group of Indians in South America.

While the Mapuche are famous for their 350-year-old struggle against the Spanish, the researchers believe the woman died before the Spanish arrived.

The team also found a red-and-white jug placed near her head.

‘The dating of this piece to 880 years BP makes this the earliest record in Argentina of the use of Red on White Bichrome tradition pottery, and of its use as a funerary element,’ the team explained.

The jug may have been used as part of the funeral ritual, and left behind by whoever was charged with her burial, according to the researchers.

The discovery marks the first time a canoe-type burial has been seen in Argentinean Patagonia.

It’s also remarkable in the sense that it was a woman buried in the canoe – traditionally, most canoe burials were for men.

Previous studies have suggested that burying people in canoes was part of a ritual to aid their journey into the afterlife, known as Nomelafken.

‘Nomelafken, the other side of the sea, is identified as a destination of souls,’ the researchers wrote.

‘To sum up, we present here the first find of a burial in a canoe structure, or its symbolic representation, in Argentinian Patagonia, and the most southern example found to date on the whole continent,’ the researchers concluded. 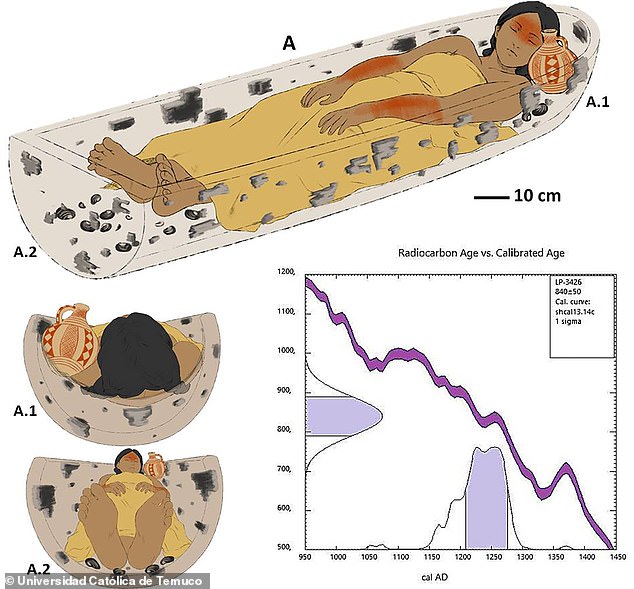 Previous studies have suggested that burying people in canoes was part of a ritual to aid their journey into the afterlife, known as Nomelafken

Six mummified children found in a grave in Peru were sacrificed to accompany a dead nobleman to the afterlife 1,200 years ago, archaeologists believe.

The tiny skeletons, wrapped tightly in cloth, were discovered last November at the dig site of Cajamarquilla, east of the capital Lima.

They were uncovered in the grave of an important man — possibly a political figure — who is believed to have been aged between 35 and 40 at the time of his death, while the bones of seven adults who had not been mummified were also found in the tomb.

The perceived nobleman was entombed in the fetal position with his hands covering his face, and tied up with rope.

Archaeologists said the youngsters could have been the important person’s children and are thought to have been sacrificed by pre-Incan inhabitants of the Andes, possibly the Wari civilisation.

‘We think that some of them could be the children, the wife and the closest servant of the Cajamarquilla mummy, who were sacrificed as part of the funerary rituals that rendered him an important character, whose soul had to be accompanied to cross the long road to his last resting place or world of the dead,’ said archaeologist Pieter Van Dalen, who was in charge of the dig.