‘The happiest place on Earth could have turned into my worst nightmare’: Woman was unknowingly tracked for two HOURS around Disneyland California after an Apple AirTag was secretly planted on her

A woman has described her experience of being secretly tracked by someone who secretly planted an Apple AirTag on her.

Hannah Rose May, an Irish writer and actress, said her location was tracked without her knowledge for two hours around Disneyland California a Saturday night in June.

She finally realised she was being tracked only because the tag linked up to her smartphone over Bluetooth and sent her a notification.

It’s not known who planted the coin-sized device on her, or where exactly it was hidden without her knowledge – possibly in her bag or pocket.

‘The happiest place on earth could of very easily turned into my worst nightmare,’ she tweeted.

A number of reports in the US have already claimed people are being unknowingly tracked with AirTags, potentially by stalkers, thieves and sexual predators. 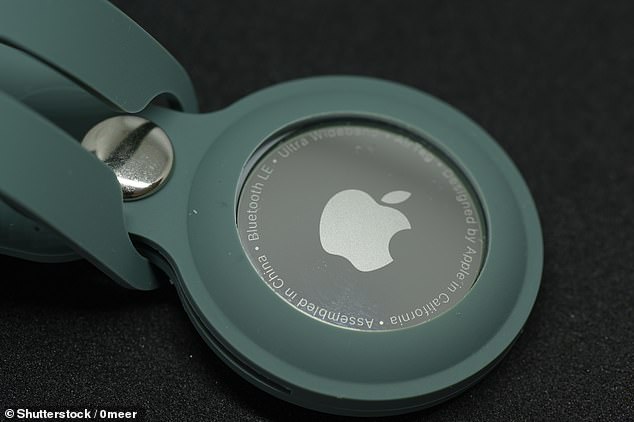 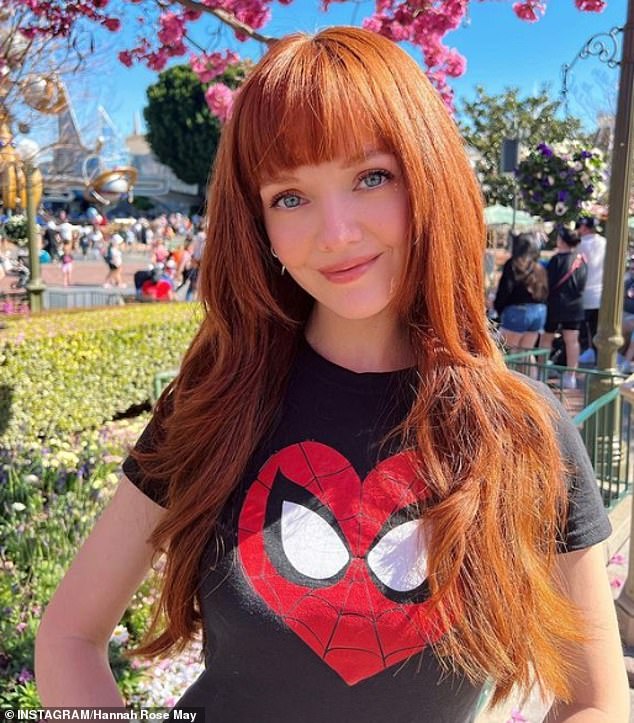 AirTags, released by Apple in 2021, are small, circular tracking devices, slightly larger than a two-pound coin, retailing for £29 each.

Users can find personal items that have an AirTag attached – such as wallets, keys, luggage or even a stolen bicycle – by using a map on Apple’s ‘Find My’ app.

But AirTag owners are increasingly using the coin-sized devices to plant on people without their knowledge, and then track their whereabouts on the Find My map.

The incident occurred on June 25 when May was attending an after-hours event at Disneyland California.

She said she only found out that she was being tracked after two hours because she got a notification from the Find My app.

‘I got a Find My notification at the end of the night that I didn’t think anything of but opened it anyway and it turned out to be this… someone had been tracking me for two hours,’ May said in a Twitter thread.

‘Airtags are the size of a coin. It’s scary how easy they are to slip into a pocket or purse.

‘Originally created to locate your keys it’s evident they are being used for more bad than good.’

AirTags can connect to smartphones that are in the vicinity via Bluetooth, and so a notification from Find My will pop up on a person’s phone if an unknown AirTag is found ‘travelling’ with them, even if they do not have the Find My app installed.

May said she was grateful to Apple for alerting her, although she added that she thinks ‘it should notify us sooner if we’re being tracked’.

She also shared a screenshot of where she had travelled while she was being tracked – from all around Disneyland, down to a parking lot just off South Harbor Boulevard, where she disabled it.

When asked for comment about the incident, an Apple spokesperson sent MailOnline a statement published in February, following reports in the media about misuse of the technology.

‘AirTag was designed to help people locate their personal belongings, not to track people or another person’s property, and we condemn in the strongest possible terms any malicious use of our products,’ the statement said. 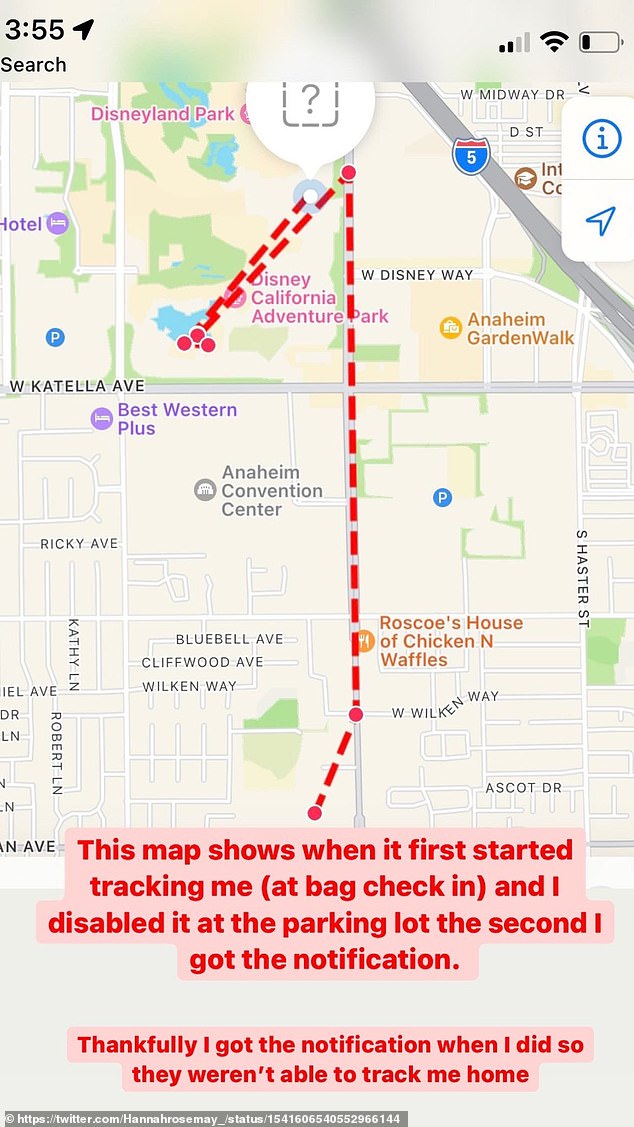 May shared a screenshot of where she had travelled while she was being tracked by the AirTag – from all around Disneyland, down to a parking lot just off South Harbor Boulevard, where she disabled the device

‘Unwanted tracking has long been a societal problem, and we took this concern seriously in the design of AirTag.

‘It’s why the Find My network is built with privacy in mind, uses end-to-end encryption, and why we innovated with the first-ever proactive system to alert you of unwanted tracking.’

Apple also said that incidents of AirTag misuse were rare but that ‘each instance is one too many’.

The company also confirmed it has identified ‘additional improvements’ it can make in helping law enforcement on AirTag-related requests. 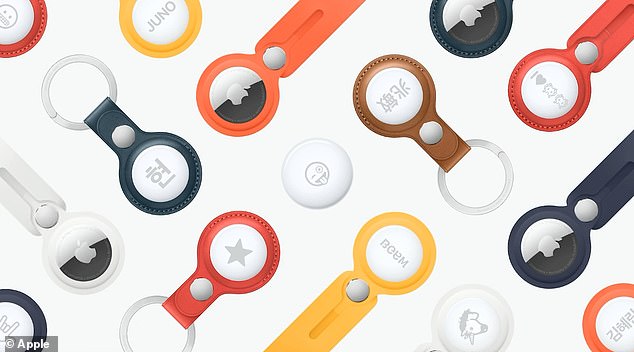 Apple’s AirTags can be personalized with a custom message or an emoji, on its laser-etched stainless steel body. They’re small enough to be slipped into someone’s bag or clothing without their knowledge

In addition, Apple said it was looking into a new ‘precision finding feature’ that would let people locate unknown AirTags with precision and tuning the sound of the unwanted tracking alert tone to make the device more easily findable.

According to an investigation by Vice earlier this year, 150 police reports from dozens of US police departments had involved AirTags over an eight-month period.

Of the 150 reports, 50 cases involved women who had called the police because they started getting notifications that their whereabouts were being tracked by an AirTag they didn’t own.

In one case, a woman called the police to report that her ex had slashed her tires and left an AirTag in the car to watch her.

Women in the US have been coming forward with horror stories of finding Apple AirTag tracking devices hidden in their cars, bags, coats and other items.

The $30 wireless devices were designed to help keep track of items people often misplace, like keys or wallets, but have increasingly been revealed to be used by suspected stalkers to track women.

A young mother in Texas said she found an AirTag taped inside her duffel bag as she traveled from Texas to Maine.

‘I think they definitely would have hurt me. I don’t think you do that for no reason,’ she told Inside Edition.  ‘It took almost 14 hours to let me know this was happening,’ she said.

Another woman in Atlanta contacted police after she was notified that she was being tracked by an AirTag.

‘I randomly got a notification to my phone saying something about how there is an AirTag that doesn’t belong to me that’s been with me,’ the woman explained to police.

Bodycam footage recorded the scene as police helped the woman search her car and eventually found an AirTag in her gas tank.