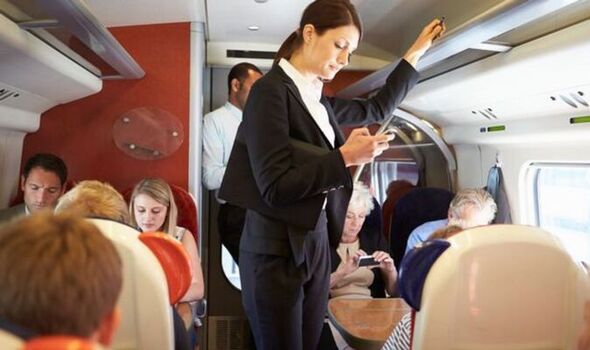 A woman has defended her decision to not give up her priority train seat to an elderly woman after insisting she had booked it in advance.

The woman, who was traveling from London to Aberdeen, chose to treat herself to a first-class ticket so she could reserve a seat and work without worrying about being disturbed.

When she boarded the train, she realised the seat she had been allocated was the first-class carriage’s priority seat.

Priority seats are usually reserved for people with mobility issues, and when a woman of around 60 got on board, she demanded that she give up the seat for her, reports The Mirror.

In a post on Reddit, she fumed: “I recently got a train across the UK from London to Aberdeen.

“It’s a seven-hour journey so I booked myself a first-class seat well in advance.

“First-class seats on trains in the UK can be expensive, but I decided to treat myself because 1), I knew I’d have work to do on the train, so I wanted to make sure I had space/comfort to be able to work, and 2), certain trains in the ‘individual seats’ which means you’re not sitting next to or sitting opposite anyone.

“I specifically booked one of those seats to enable me to work.

“I got on the train in London and sat in my seat. The seat they’d assigned me was also the ‘priority seat’.

“Priority seats are the ones at the end of carriages for people with mobility issues due to age or disability.

“A woman got on after me who was around 60 years old and pointed at the sign above my head and, quite rudely, told me to move because she was elderly.

“I told her I’d booked the seat and she’d need to speak to a member of staff to find her one.

“She pointed out that the train was full and there were no other seats.

“I apologised but reiterated that I’d booked the seat and wasn’t going to move.”

The woman and the older passenger were eventually seen to by a member of staff, who discovered that while the older woman had a first-class ticket, she had not booked a seat so therefore was not guaranteed to get one.

The member of staff then tried to persuade the two women to come to some middle ground in which one of them would step down to an available seat in standard class, but the woman who booked the seat still refused to budge.

She added: “Eventually, a train guard came over to try to help.

“The lady had booked a return ticket, but she hadn’t reserved a specific seat.

“For those who don’t know how trains work, if you have a ticket but haven’t also booked a seat reservation, it means you can travel on a train, but you aren’t guaranteed a seat unless there’s one available.

“He asked if either of us would consider moving to standard class if he could find us a seat.

“I again refused, explaining I’d booked the seat well in advance and that I needed it.

“Eventually, he took the woman to standard class and I assume found her a seat there.

“I felt bad, but I also don’t think I needed to put myself in severe discomfort because someone else didn’t think ahead and reserve a seat.”

Commenters on the post were divided over the outcome, as while many people agreed that the woman should be able to sit in the seat she booked, others also pointed out that the train company should not have allowed the priority seat to be booked without making it clear what sort of seat it was.

One person said: “The train company are the a**holes here. They sold the disability seats as the most expensive seats on the train.

“Those seats should never be sold unless the occupier is disabled. That’s on the train operator. It’s not on you.”

While another added: “If it was a first-class seat on a plane and someone asked you to move to economy, you’d tell them to f*** right off. Same applies here, in my mind.”

And a third said: “The woman was for thinking she was entitled to your reserved seat though.

“Elderly or not, you paid in advance and shouldn’t have to move just because she showed up.”