World Cup footballers face ‘unseasonable heat’ in Qatar because of climate change: Temperatures during today’s England and Wales game will be more than 5°F hotter than normal, experts warn

Climate change has made temperatures more unbearable for footballers during the FIFA World Cup in Qatar, new research shows.

According to climate organisation Climate Central, footballers are facing ‘unseasonable heat’ during the tournament because of global warming.

On Tuesday alone, temperatures are 5.58°F (3.1°C) hotter than normal for this time of year across the whole country – an increase made twice as likely by climate change.

This increase will be felt by fans attending the match between England and Wales at the Ahmad bin Ali Stadium in Al Rayyan at 7pm GMT tonight. 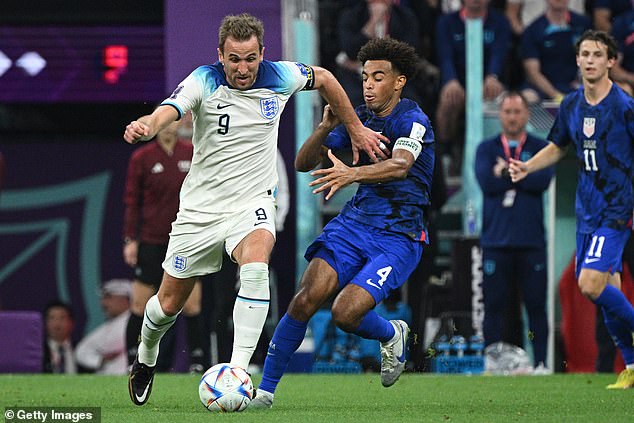 Footballers face ‘unseasonable heat’ in Qatar because of climate change, according to the new research. Pictured, England captain Harry Kane skips past a challenge from the USA’s Tyler Adams at Al Bayt Stadium on Friday, November 25, 2022

Fans have already been sweltering in Qatar’s high temperatures over the past week, which have pushed past 86°F (30°C).

Fortunately, when inside the World Cup stadiums, fans and players are being kept cool by specially-fitted technology that circulates cold air – although this was turned off for England’s match against the USA, leaving players sweltering.

In extreme temperatures, athletes are at risk of suffering from heat-stress disorders such as heat cramps, heat exhaustion or heat strokes.

‘The stress of competing in extreme heat is already affecting more athletes around the world,’ said Dr Andrew Pershing, director of climate science at Climate Central.

‘Climate change is making outdoor sports riskier for both pros and the rest of us.

‘It will keep getting even riskier, until net greenhouse gas emissions are halted and global temperatures stop rising.’

The research was based on results from the Climate Shift Index, a free and publicly-available tool on Climate Central’s website that shows how much global warming influenced a certain day’s weather around the world. 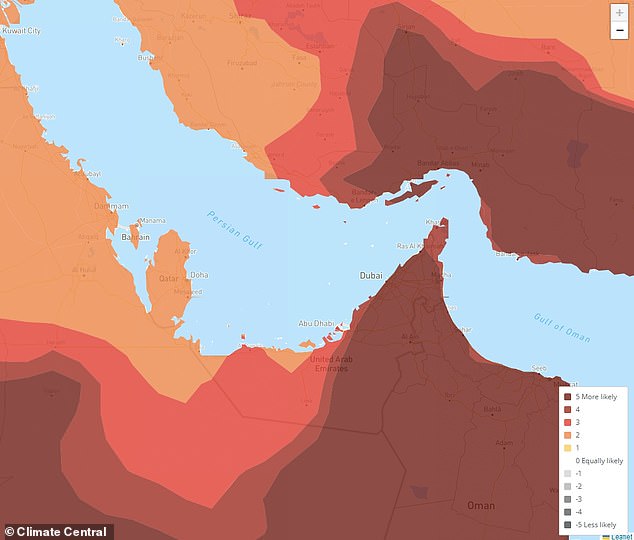 According to the index, temperatures in the whole of Qatar on Friday, November 25 (the day of England’s last match) were 3.42°F (1.9°C) hotter than normal – an increase made twice as likely by climate change

The Climate Shift Index reveals how much climate change influences the temperature on a particular day.

For levels at 2 or above, the Index is a multiple of how frequently a particular temperature will occur due to climate change.

For example, a Climate Shift Index of level 5 means that that a temperature is occurring five times more frequently.

This would be very difficult to encounter in a world without climate change – not necessarily impossible, just highly unlikely.

For example, a Climate Shift Index level of +3 means the day’s average temperature was made at least three times more likely than it would have been without the influence of human-caused climate change.

This has been combined with a measure of how much hotter than normal a part of the world is on a given day, measured in degrees Fahrenheit or Celsius.

So, according to the index, temperatures in the whole of Qatar on Friday, November 25 (the day of England’s most recent match) were 3.42°F (1.9°C) hotter than normal – an increase made twice as likely by climate change.

On some recent days, including Sunday (November 27), higher than average temperatures were made three times more likely due to climate change, in an area spanning Qatar’s northeast.

This area covers capital city Doha and Al Khor, a city in the country’s north – both of which are home to World Cup stadiums.

Matches played in stadiums within this area on Sunday included Spain versus Germany and Belgium versus Morocco. 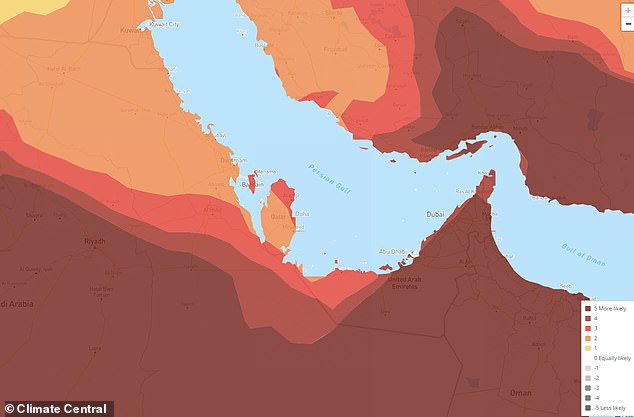 On some days, including Sunday (November 27), higher than average temperatures were made three times more likely due to climate change in an area of Qatar (red shaded area on the north-east tip of Qatar)

This evening’s match against England and Wales will be played at the Ahmad bin Ali Stadium in the city of Al Rayyan, which is just to the east of capital Doha.

Climate Central also ranked World Cup nations’ capital cities based on how much they are impacted by climate change.

Football fans will remember the controversy when FIFA moved the date of the 2022 World Cup back an extra six months due to the heat threat.

It meant the World Cup would for the first time be played during winter rather than summer, due to the ‘potential health risk’ to players. 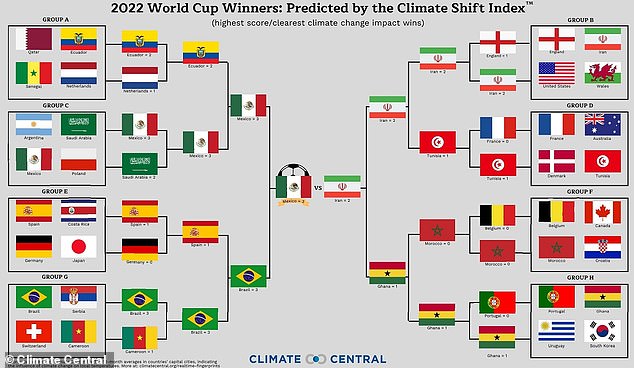 Qatar therefore invested in cooling technology to bring the temperatures down and prevent potential heatstroke for players, officials and spectators.

Using solar-powered energy, outside air is cooled and then distributed through grills in the stands and large pitch-side nozzles.

The technology is now fitted in seven of eight Qatar 2022 stadiums, with the only exception Stadium 974 in Doha, which is fully-demountable and features natural ventilation due to its location near the sea.

Football fans now have only a few more days of waiting to endure before the men’s FIFA World Cup finally commences in Qatar.

After an agonising four-and-a-half-year gap since the last tournament, the host nation will kick off Qatar 2022 on Sunday against Ecuador in Al Khor.

England, meanwhile, play their fist match against Iran the following day, as Gareth Southgate’s men seek to finally bring it home after 56 years of hurt at the World Cup final on December 18.

This year, players and fans alike will see a host of new technologies that have never been seen at a FIFA World Cup. 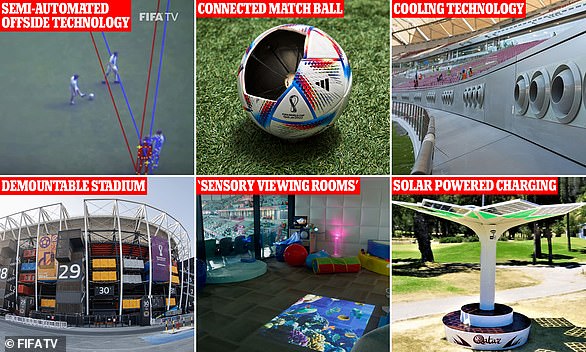 Technologies at the FIFA World Cup this year include AI-powered limb-tracking, an official ball embedded with a sensor, sensory viewing rooms and a demountable stadium inspired by Lego

Here’s a look at the innovations at Qatar 2022, from AI-powered limb-tracking to a demountable stadium inspired by Lego.