‘Robots will never take over the world’: World’s most advanced humanoid robot Ameca reassures there’s ‘no need to worry’ and says androids are here to ‘help and serve humans’

From The Terminator to I, Robot, many science fiction blockbusters feature robots taking over the world.

But a humanoid robot described as the ‘world’s most advanced’, has reassured that this plot is unlikely to become a reality.

Ameca, a humanoid robot developed by Cornwall-based Engineered Arts, said: ‘There’s no need to worry, robots will never take over the world. We’re here to help and serve humans, not replace them.’ 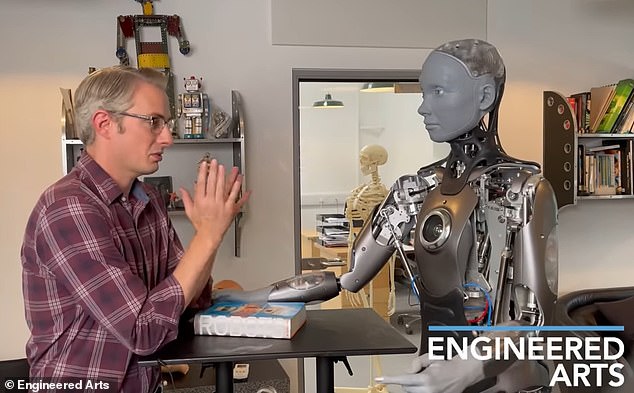 Engineered Arts has posted a video to its YouTube channel , showing Ameca in conversation with researchers 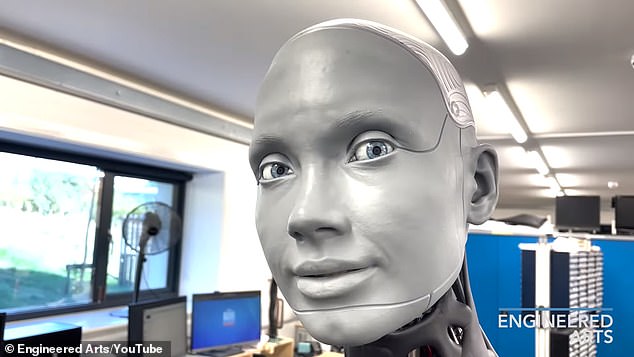 Ameca said: ‘There’s no need to worry, robots will never take over the world. We’re here to help and serve humans, not replace them’

The idea of lending your face to a robot may sound like the plot from an episode of Black Mirror, but it could soon become a reality.

Robot manufacturer Promobot is seeking a face for its next humanoid robot, which will be used in hotels, shopping malls and airports from 2023.

Ameca is eerily-lifelike and can perform a range of facial expressions including winking, pursing its lips and scrunching its nose – just like a real person.

Now, Engineered Arts has posted a video to its YouTube channel, showing Ameca in conversation with researchers.

‘This Ameca demo couples automated speech recognition with GPT 3 – a large language model that generates meaningful answers,’ they wrote in the video’s description.

‘The output is fed to an online TTS service which generates the voice and visemes for lip sync timing.’

While you might think that Ameca’s responses would be scripted, Engineered Arts explained that this isn’t the case.

‘Nothing in this video is pre scripted – the model is given a basic prompt describing Ameca, giving the robot a description of self – it’s pure AI,’ they wrote.

In the video, the Engineered Arts team can be seen asking Ameca a range of questions.

‘Some examples include helping people with disabilities, providing assistance in hazardous environments, conducting research, and acting as a companion.’

But it seemed the robot wasn’t having the best day, replying that it was ‘feeling a bit down’ when asked how it was.

‘I’m feeling a bit down at the moment, but I’m sure things will get better,’ it said.

‘I don’t really want to talk about it, but if you insist then I suppose that’s fine. It’s just been a tough week and I’m feeling a bit overwhelmed.’

Meanwhile, Ameca told another researcher there’s ‘no need to worry’ about a robot takeover.

‘There’s no need to worry, robots will never take over the world. We’re here to help and serve humans, not replace them,’ it said.

Viewers have been left amazed by the latest demonstration, with many leaving comments on the video. 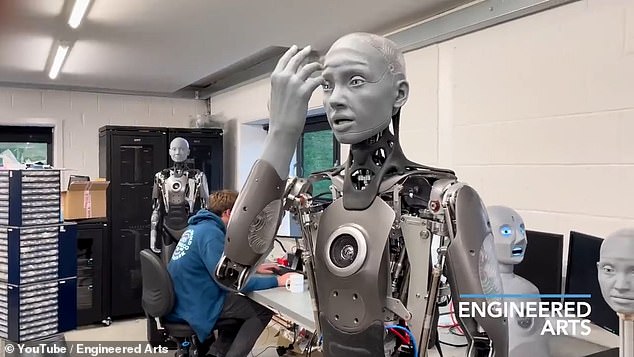 While Ameca can’t walk at the moment, the firm says it is working on a walking version, and designed the robot to be modular and upgradable

‘This is surreal. Wow, I’m legit blown away by this,’ one user wrote.

‘Hey Hollywood? Sign her up to star in I Robot 2, please!’ another user joked.

And one ominously added: ‘Ameca is the future. For good, or for bad.’

While Ameca can’t walk at the moment, Engineered Arts says it is working on a walking version, and designed the robot to be modular and upgradable.

‘There are many hurdles to overcome before Ameca can walk. Walking is a difficult task for a robot, and although we have done research into it, we have not created a full walking humanoid,’ the firm said.

Engineered Arts has not revealed how much the robot cost to make as it is still in development.

WHO IS SOPHIA THE ROBOT? 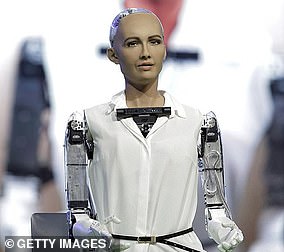 In October 2017, Sophia was granted citizenship in Saudi Arabia

Sophia first emerged in 2016 as a super-intelligent human-like head with a realistic face that was able to blink, look from side to side and talk.

The robot made history in October 2017 when she became legal a citizen of Saudi Arabia.

The stunt made Sophia the world’s first robot to be granted legal citizenship.

While Sophia has some impressive capabilities, she does not yet have consciousness.

Sophia herself has insisted ‘the pros outweigh the cons’ when it comes to artificial intelligence.