World’s most popular weed killer Roundup causes dramatic convulsions in worms even at low concentrations- and may affect the nervous systems of other animals and even humans, study warns

The health effects of the world’s most popular herbicide Roundup on humans and animals have long been debated.

Now, new research has linked low levels of glyphosate – the weed killing component – to convulsions in soil-dwelling roundworms for the first time.

Scientists from Florida Atlantic University exposed Caenorhabditis elegans to the US and UK formulations of Roundup, as well as glyphosate by itself.

Even when the branded herbicide was diluted 300 times lower than the lowest concentration recommended for consumer use, it caused convulsions.

Both types of Roundup also caused more seizures than the isolated chemical, suggesting there are other dangerous ingredients in the herbicide interacting with the worms’ brains.

Akshay S. Naraine, project lead and PhD student, said: ‘It is concerning how little we understand the impact of glyphosate on the nervous system.

‘More evidence is mounting for how prevalent exposure to glyphosate is, so this work hopefully pushes other researchers to expand on these findings and solidify research from where our concerns should be.’ 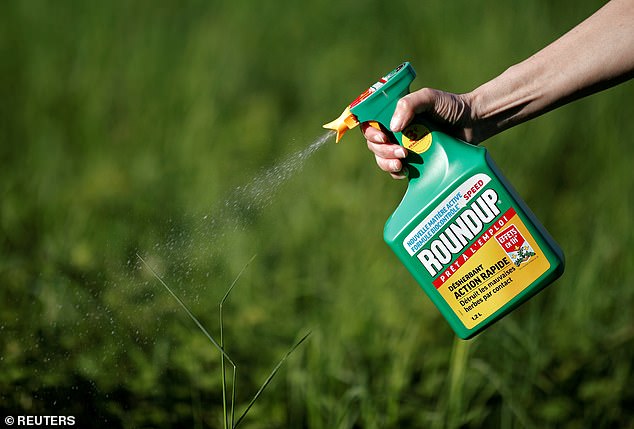 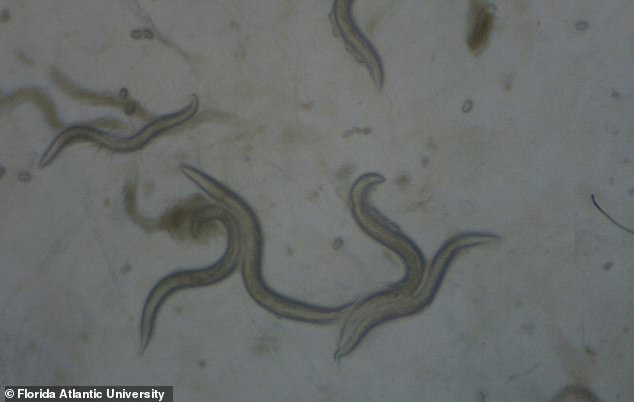 Scientists from Florida Atlantic University exposed Caenorhabditis elegans (pictured) to the US and UK formulations of Roundup, as well as glyphosate by itself. Even when the branded herbicide was diluted 300 times lower than the lowest concentration recommended for consumer use, it caused convulsions

THE SAGA SURROUNDING THE SAFETY OF GLYPHOSATE

Glyphosate is an herbicide first registered for use in the US in 1974.

It is marketed either as a salt or an amber-coloured liquid with no smell.

Monsanto markets glyphosate as part of the pesticide Roundup.

Several studies found that high doses administered to laboratory animals  caused cancer, although the evidence is ‘limited’ when it comes to humans.

In March 2015, the World Health Organization ranked glyphosate a Group 2a carcinogen, a substance that probably causes cancer in people.

Monsanto has vehemently denied that its product causes cancer and says and more than 800 studies that have established its safety.

Yet more than 4,000 plaintiffs have filed lawsuits claiming Monsanto made them or members of their family sick.

Roundup, developed by Monsanto and first released in 1974, is the world’s most commonly used herbicide by volume and by land-area treated.

An estimated 6.1 billion kilos of glyphosate has been sprayed across resistant crops globally from 2005 to 2014, and is used at both industrial and consumer levels.

Several studies found that high doses administered to laboratory animals caused cancer and, in 2017, this was confirmed when Monsanto were taken to court.

However, leaders at Monsanto and Bayer have persistently argued that Roundup is safe and non-carcinogenic for humans.

These assertions have since been questioned, as they were found to be based on industry-led research rather than independent study.

A 2019 study found that exposure to glyphosate can increase the risk of Hodgkin lymphoma in humans by as much as 41 per cent.

Roundup is still available to purchase as the US Environmental Protection Agency, EU Regulators and UK government all maintain that glyphosate is not harmful to humans.

The chemical is also incredibly pervasive, having been found in breakfast cereals, pet food and nappies.

A report, published last month by the United States Centers for Disease Control and Prevention, found more than 80 percent of urine samples from children and adults in the US contained glyphosate.

Despite the significant research into the herbicides carcinogenic effects, the impacts of glyphosate on the nervous system has yet to be fully understood.

To probe this, scientists measured the convulsion response of roundworms to Roundup and isolated glyphosate.

They used formulations of the herbicide before and after the UKs 2016 ban on polyethoxylated tallow amine (POEA) surfactants, which are potentially carcinogenic.

This allowed them to investigate the effects specific to the active ingredient glyphosate, surfactants and the combination of chemicals in Roundup.

Previous studies have suggested that glyphosate has neurotoxic effects, and the researchers hypothesised it targets the GABA-A receptors in the brain.

These communication points are essential for movement and are heavily involved in regulating sleep and mood in humans.

The study, published yesterday in Scientific Reports, found that glyphosate exacerbated the convulsions.

However, when researchers bred worms without GABA-A receptors, they did not have seizures when exposed to glyphosate or Roundup.

This suggests that the receptors, that play a role in virtually all brain functions, are affected by the chemicals in the herbicide.

Moreover, a higher percentage of worms were not able to recover from seizure activity after exposure to Roundup than glyphosate alone.

The US version caused convulsions that went for over a minute – nearly twice as long as isolated glyphosate – and the UK version also caused more seizures.

These results suggests other chemicals are present in the herbicide that overstimulate the animal’s brain, even at very low levels.

Mr Naraine said: ‘The concentration listed for best results on the Roundup Super Concentrate label is 0.98 percent glyphosate, which is about 5 tablespoons of Roundup in 1 gallon of water.

‘A significant finding from our study reveals that just 0.002 percent glyphosate, a difference of about 300 times less herbicide than the lowest concentration recommended for consumer use, had concerning effects on the nervous system.’ 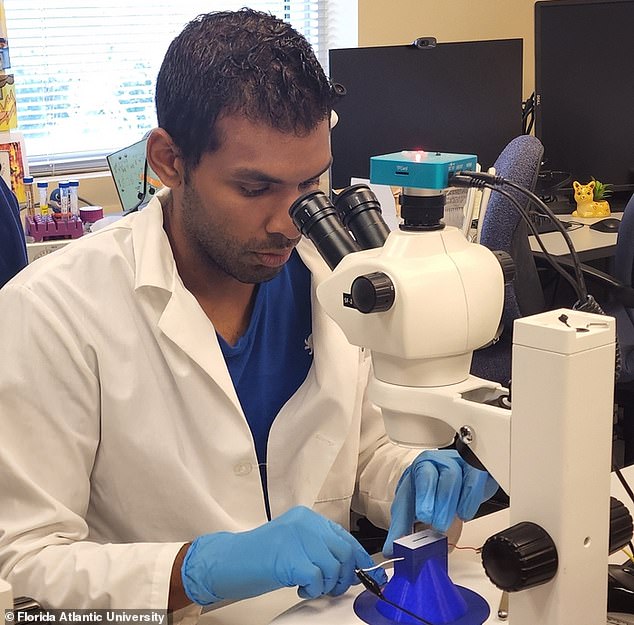 Project lead Akshay S. Naraine (pictured) said: ‘It is concerning how little we understand the impact of glyphosate on the nervous system. More evidence is mounting for how prevalent exposure to glyphosate is, so this work hopefully pushes other researchers to expand on these findings and solidify research from where our concerns should be’

He added: ‘These roundworms undergo convulsions under thermal stress, and our data strongly implicates glyphosate and Roundup® exposure in exacerbating convulsive effects.

‘This could prove vital as we experience the effects of climate change.’

The findings suggest more work should be done to investigate the potential neurodegenerative effects of Roundup and its ingredients.

As well as soil-dwelling creatures like worms, the neurotoxic effects could be observed in humans in the form of diseases like Parkinson’s.

A 2004 study found that the level of toxicity measured in nematode brains is highly correlated with neurotoxicity in mammals.

Dr Ken Dawson-Scully, from Nova Southeastern University, added: ‘Given how widespread the use of these products is, we must learn as much as we can about the potential negative impacts that may exist.

‘There have been studies done in the past that showed the potential dangers, and our study takes that one step further with some pretty dramatic results.

‘As of now, there is no information for how exposure to glyphosate and Roundup® may affect humans diagnosed with epilepsy or other seizure disorders.

‘Our study indicates that there is significant disruption in locomotion and should prompt further vertebrate studies.’

Honeybees are being killed by world’s most popular weedkiller Roundup, study finds

Honeybees are being killed by the world’s most popular weedkiller Roundup, new research has revealed.

The active ingredient in Roundup is glyphosate which causes bees to lose beneficial bacteria in their guts.

This leaves them more susceptible to infection and death from harmful bacteria.

Scientists believe this is evidence that Roundup, which is made by Monsanto, might be contributing to the decline of honey bees and native bees around the world. 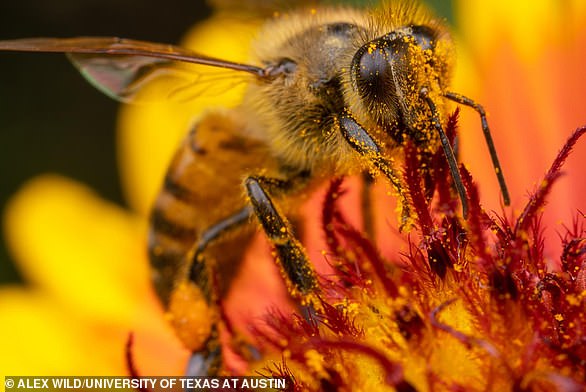 Honeybees (pictured) are being killed by the world’s most popular weedkiller Roundup, new research has revealed. The active ingredient in Roundup is glyphosate which causes bees to lose beneficial bacteria in their guts