Dockworker surfs at Port of Felixstowe while union strike continues

First the Conga, now they’re SURFING! Port worker carrying a Unite the Union flag skims along the water at Felixstowe while strike at Britain’s biggest and busiest container port continues

A port worker carrying a Unite the Union flag has been pictured surfing in front of cargo ships at the Port of Felixstowe as they continue their eight-day walkout for more pay.

After conga-dancing dockers belted out Britain’s unofficial party anthem Sweet Caroline on picket lines on Monday, a port worker was today seen skimming along the water on a surfboard at Britain’s busiest port in Suffolk.

Amid an ongoing cost of living crisis, Unite has galvanised 1,900 of its members to stage the action, seeking to plunge the UK supply chain into anarchy and disrupt an estimated £700million of trade.

There are fears that the mass walkouts – which come amid soaring 10 per cent inflation and fears it could surge past 18 per cent next year – will cause shipping chaos at Felixstowe and lead to shop and supermarket shortages through to Christmas.

Experts have warned that shortages could put pressure on the price of goods and fuel already-rampant cost increases – perhaps even sending it through the roof by the winter – as Britons face the biggest squeeze to their living standards in 60 years.

The union’s general secretary Sharon Graham signalled today, the fourth day of the strike, that the attempted disruption could continue until Christmas as she addressed a flag-waving crowd of striking workers gathered on a roundabout near dock gate number one.

There was a festival atmosphere at the port as music, including Fight For Your Right by Beastie Boys, was played through loudspeakers, and there were cheers when passing vehicles sounded their horns.

Meanwhile, one dockworker was photographed in front of container ships casually surfing through the Suffolk waters, wearing a wetsuit and helmut and flying a Unite the Union flag. 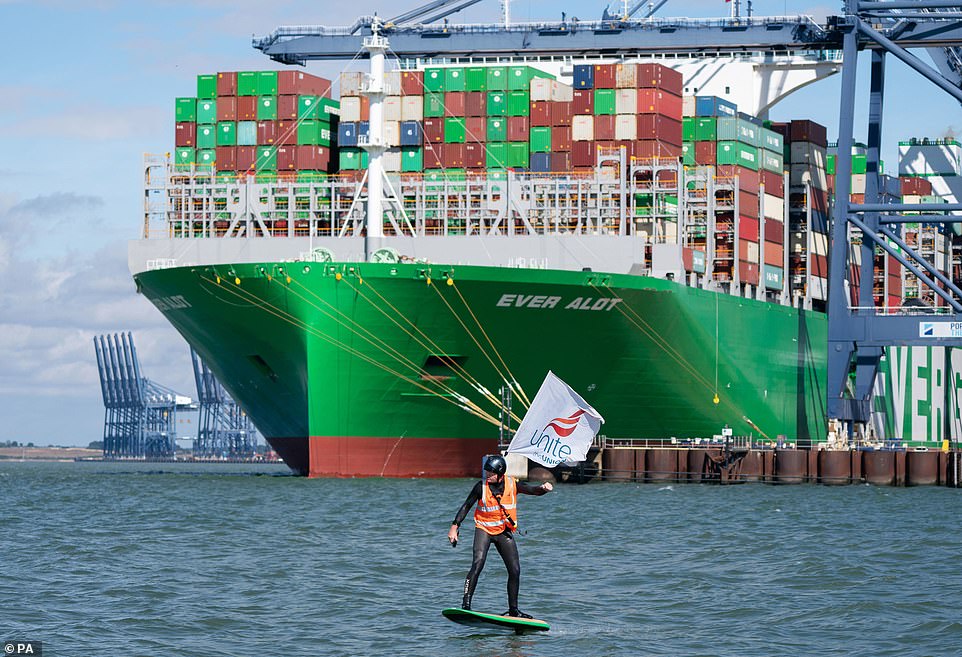 Striking dockworkers who were conga-dancing on Monday are now surfing in front of cargo ships at the Port of Felixstowe as they continue their eight-day walkout for more pay. 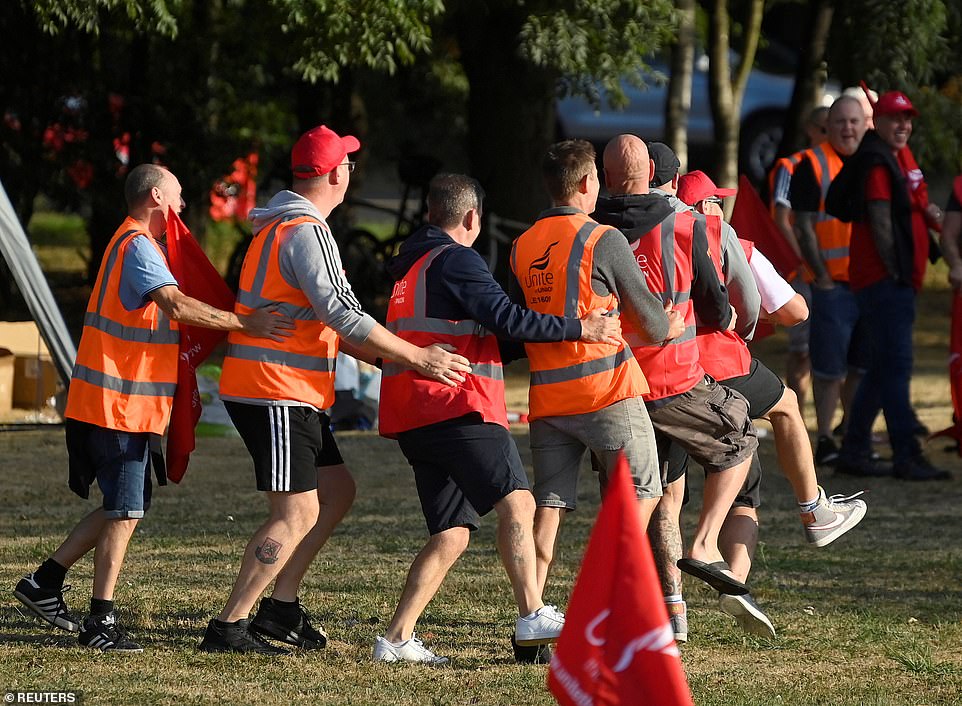 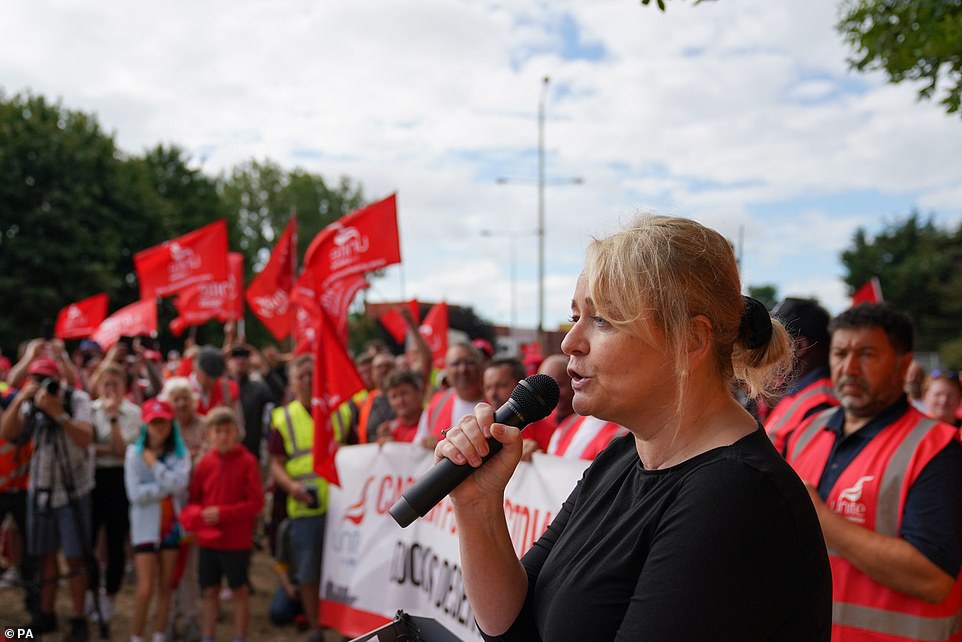 The union’s general secretary Sharon Graham (pictured) signalled today, the fourth day of the strike, that the attempted disruption could continue until Christmas as she addressed a flag-waving crowd of striking workers gathered on a roundabout near dock gate number one

Asked if disruption could continue until Christmas, Ms Graham said: ‘I think in a sense that’s a question for the employer in some ways.’

The strike began this week and will end on Monday, August 29. But Ms Graham warned the action could escalate if workers do not receive the improved pay offer that they are calling for.

Workers including crane drivers, machine operators and stevedores are taking action after voting by more than 9-1 in favour of strikes.

The union said the strike will have a significant impact on the port, which handles around four million containers a year from 2,000 ships.

It was expected that manufacturers such as Rolls Royce, Jaguar Land Rover and JCB were likely to be affected due to delays bringing in parts and exporting goods. Similarly, the Times suggested brands such as Asda, John Lewis, Tesco and Marks & Spencer would all be hit by the strikes.

But amid these fears, spokespeople for various companies have insisted to MailOnline that the impact from the action so far has been minimal, primarily because the businesses have taken mitigating steps.

JCB, Waitrose, Asda and Rolls Royce have reported limited damage to their businesses amid the strikes, while the British Retail Consortium, a trade association for UK retail businesses, said there were not aware of any major impact on retailers.

Logistics company Maersk did have to divert three of its ships but said it has been able to manage the situation. 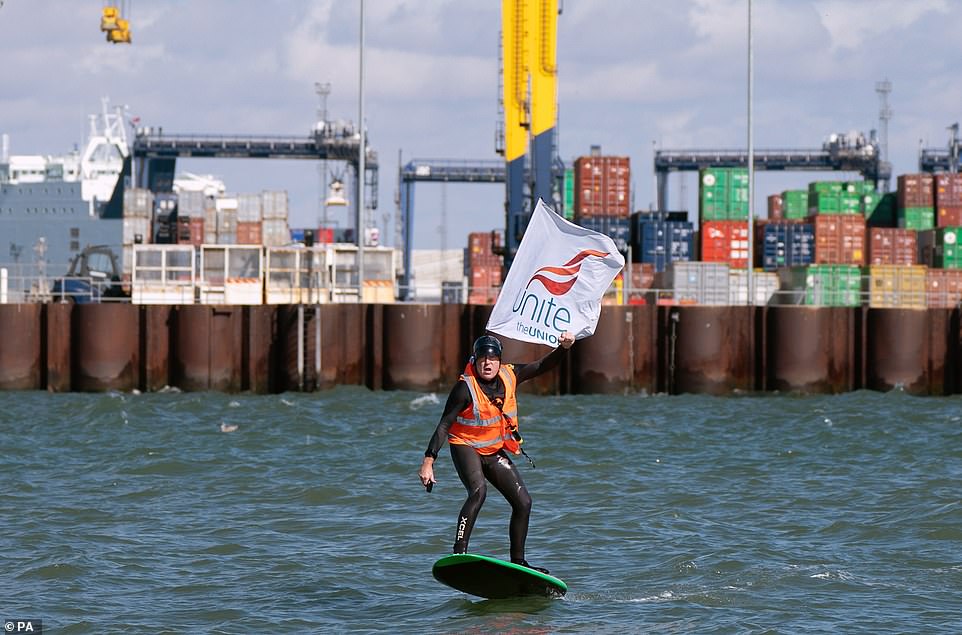 One dockworker was photographed in front of container ships casually surfing through the Suffolk waters, wearing a wetsuit and helmut and flying a Unite the Union flag 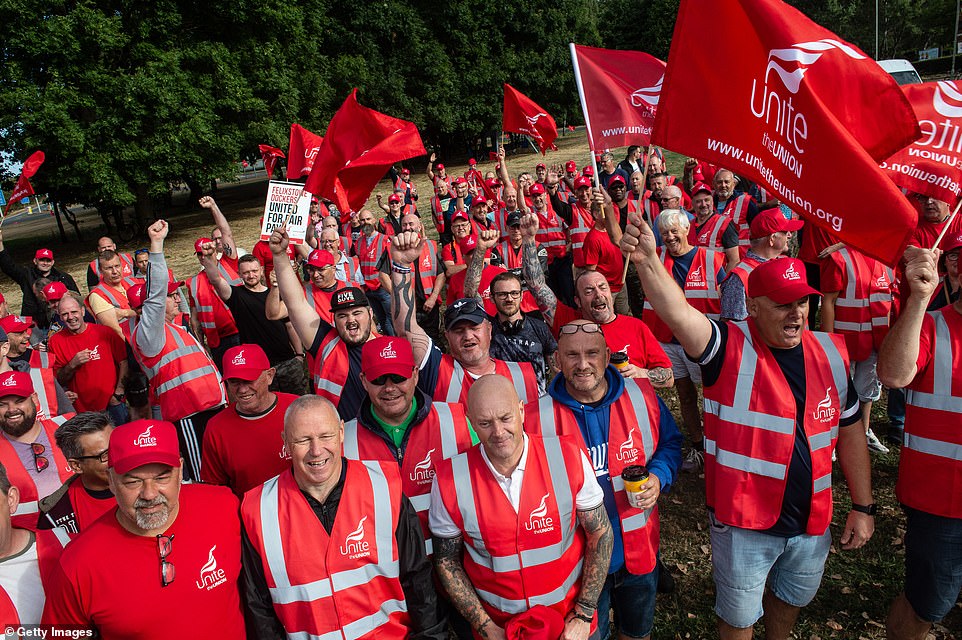 A port source previously suggested the strikes will be an ‘inconvenience not a catastrophe’, claiming the supply chain is now used to disruption following the pandemic.

The source claimed the supply chain is now used to disruption following the coronavirus pandemic.

‘Disruption is the new normal. The supply chain has moved from ‘just in time to just in case’,’ they said.

Clothing and electronics are understood to be most at risk with warnings of a ‘ripple effect across the economy’.

Union members voted to strike despite the Port of Felixstowe saying it offered workers an 8 per cent pay rise on average with those on lower salaries getting almost 10 per cent.

Management claimed Unite did not consult the 1,900 employees on the offer of a pay deal and instead balloted them on the first industrial action to hit the port since 1989.

Unite says the owner of the port, which made £61million in profit in 2020, can afford to pay more than the 7 per cent pay increase it is currently offering and claims the strike will have a big impact on day-to-day operations. 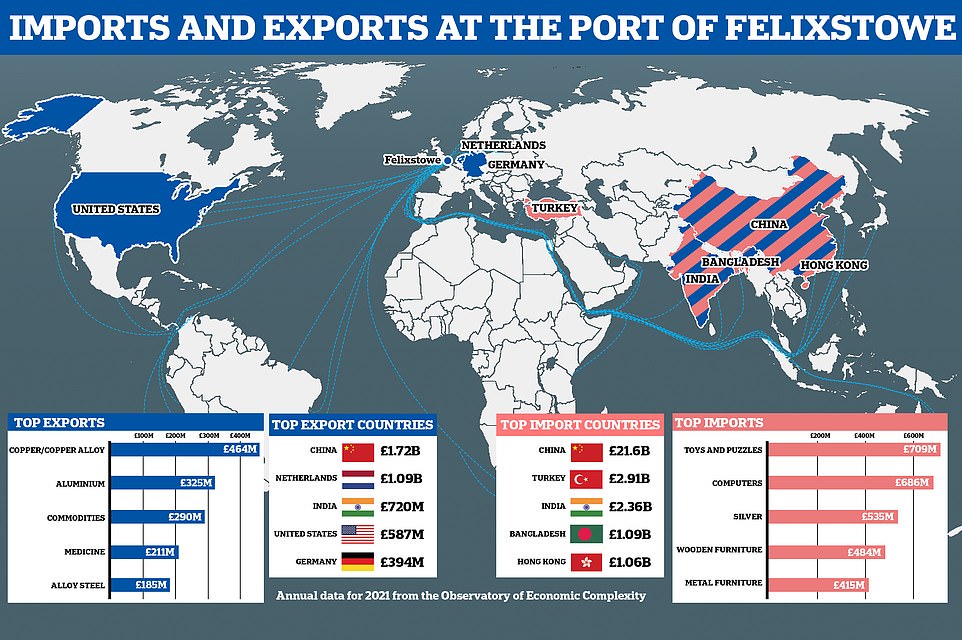 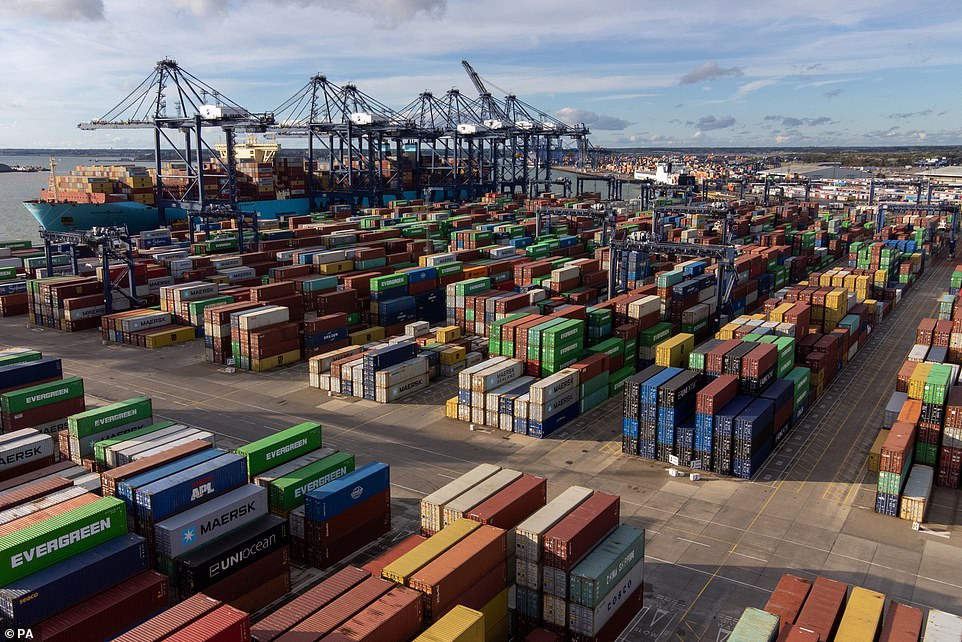 Nearly 2,000 workers have gone on strike at the Port of Felixstowe in Suffolk in a dispute over pay

Ms Graham said that disruption at the port ‘is not necessary’ and bosses ‘just need to pay the 10 per cent’ increase in wages that the union is requesting for workers.

She said the employer had made multi-million pound profits but were ‘asking these workers to take a pay cut’, adding: ‘It’s absolutely totally abhorrent.

‘At the moment the employer has not come back to the table with an improved offer and I’m here today to support these workers but also to say we will escalate this dispute unless they come back with a revised offer because this is ridiculous that they’re making this huge profit and they’re asking workers to take a pay cut.’

Ms Graham said she is speaking to reps and stewards on Wednesday and they will ‘discuss what that escalation looks like’.

‘They could give these workers a 50 per cent pay rise and still be in profit, and we’re only asking for 10 per cent,’ she said.

‘As far as I’m concerned this is laid at their door.’ 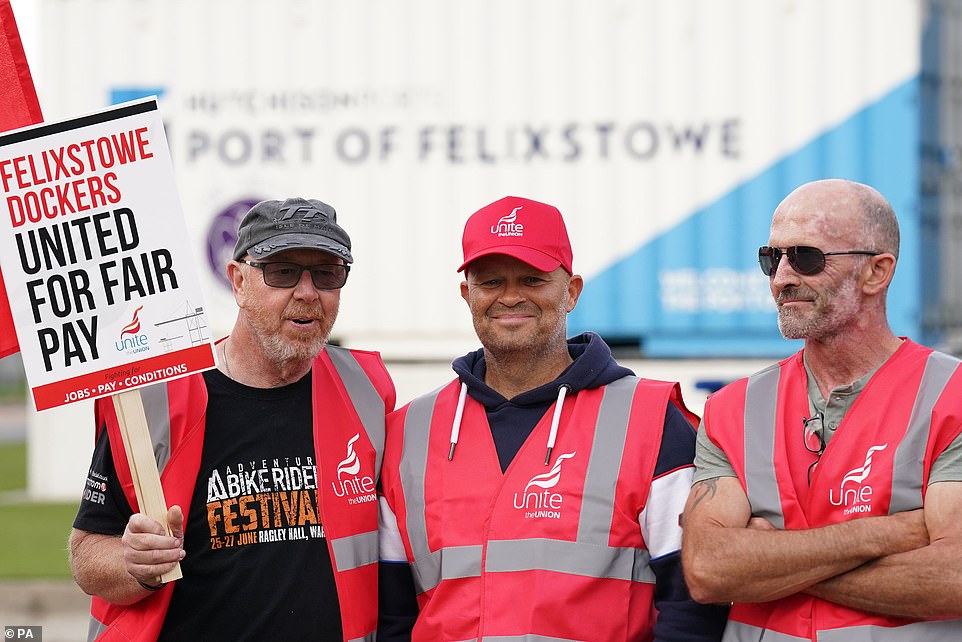 Members of Unite on the picket line on Sunday morning. The union says the port’s owners can afford to give them more than an 8% pay rise 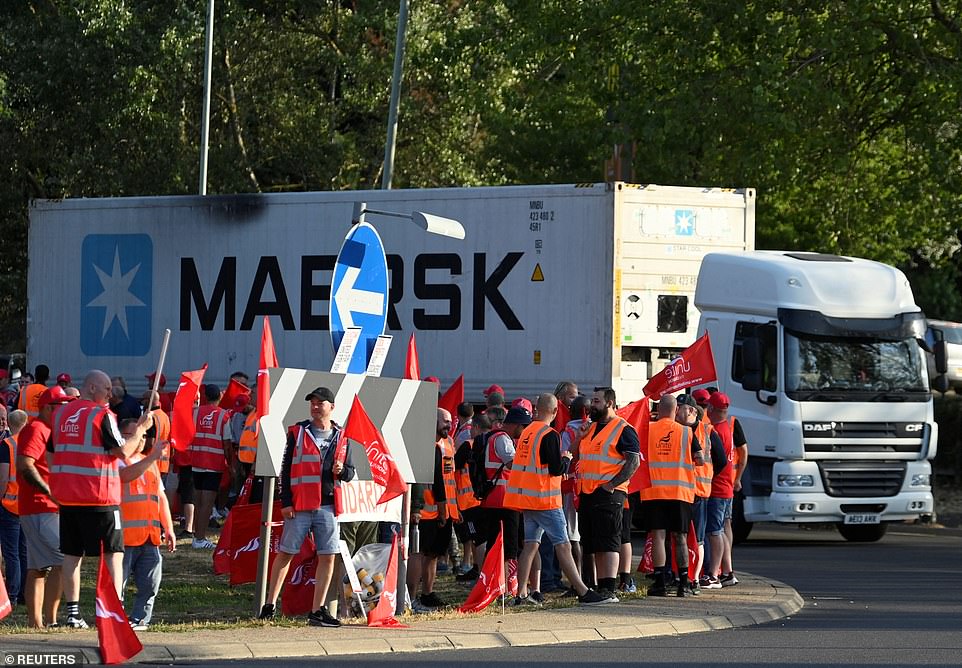 Engineer Stefan Long, who was among the striking workers, said: ‘If we can’t reach an agreement that’s worthwhile even balloting us as the members on, then it’ll go as far as it needs to go.

‘People feel so strongly about this, it speaks for itself.’

The 33-year-old, who lives in Ipswich with his wife, said they have had to ‘readjust our lifestyle’ as costs rise, with his energy bill soaring from £80 to £220 per month.

‘You see the margins shrinking and I feel for those who’ve got husband, wife, two children, three children. How are they going to get by?

‘How are they going to feed their children and heat their homes?’ 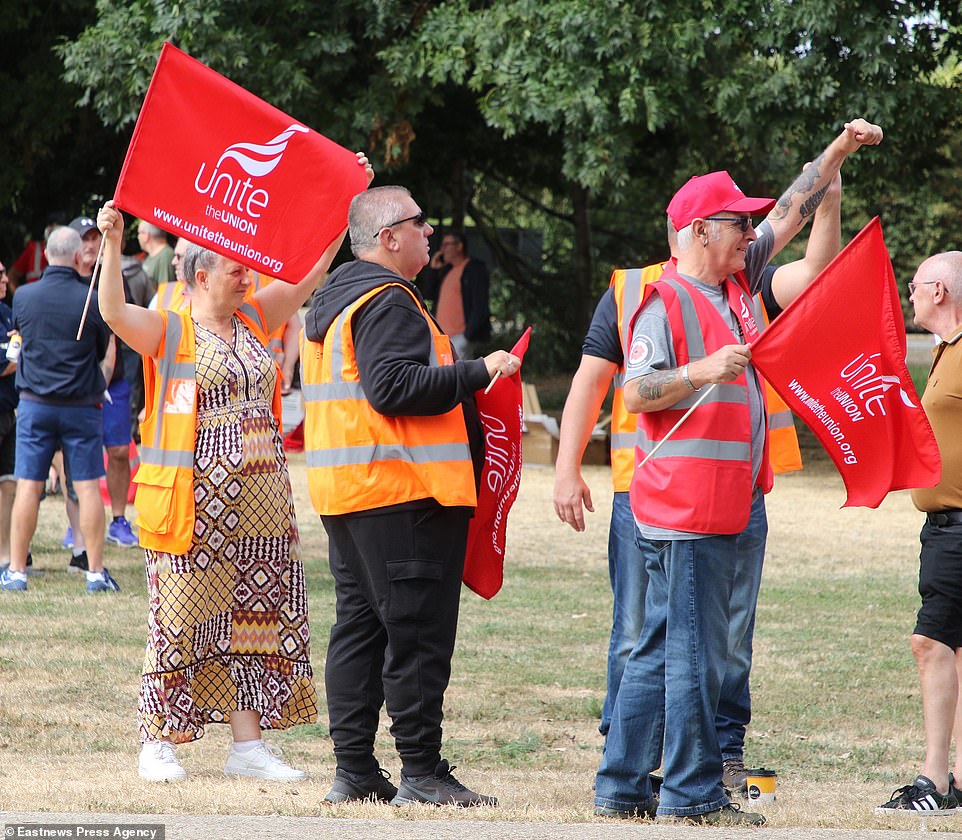 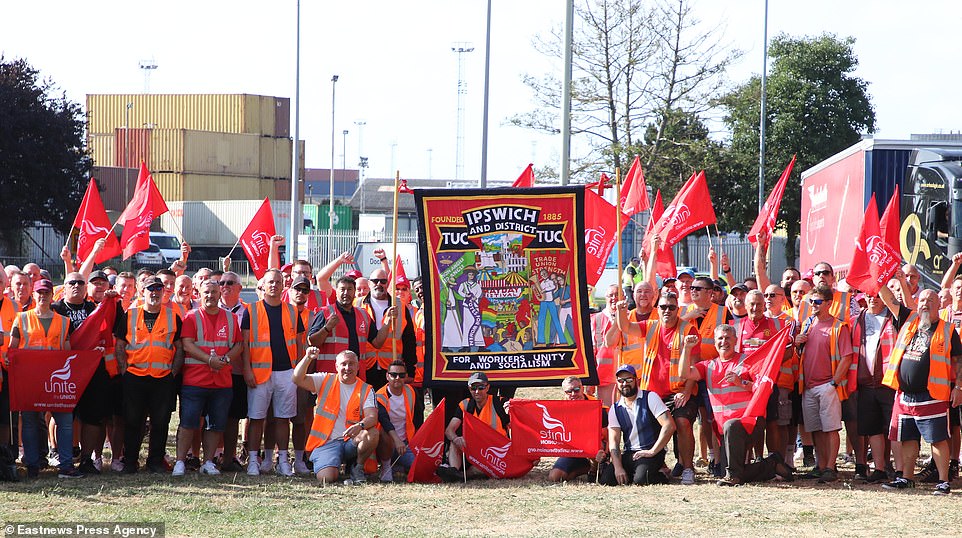 Meanwhile, a port spokesperson said: ‘A lot of our employees feel let down by Unite.

‘Many want to work and are angry that they have not been allowed to vote on the latest company offer.

‘Unite say they are a democratic union but their words don’t match their deeds and they are promoting a national agenda at the expense of many of our employees.

‘The strike imposed on them by Unite is an effective pay cut of 2.2%.

‘Many employees have told us they want to come to work but feel too uncomfortable to do so.’