World’s oldest runestone inscribed nearly 2,000 years ago is discovered in an ancient cremation pit in Norway – and the scribbles may be the earliest writing in Scandinavia

A flat, square block of brownish sandstone with inscriptions made nearly 2,000 years ago is now the world’s oldest runestone and maybe the earliest example of writing in Scandinavia.

The artifact was uncovered in a cremation pit filled with burnt bones and charcoal that date between 1 AD and 250.

Measuring 312.2 inches by 12.6 inches, the stone has several inscriptions.

Eight runes on the front could mean ‘For Idibera,’  who may be the individual laid to rest in the pit.

The rock, dubbed the Svingerud stone, will be exhibited for a month, starting on January 21, at the Museum of Cultural History. 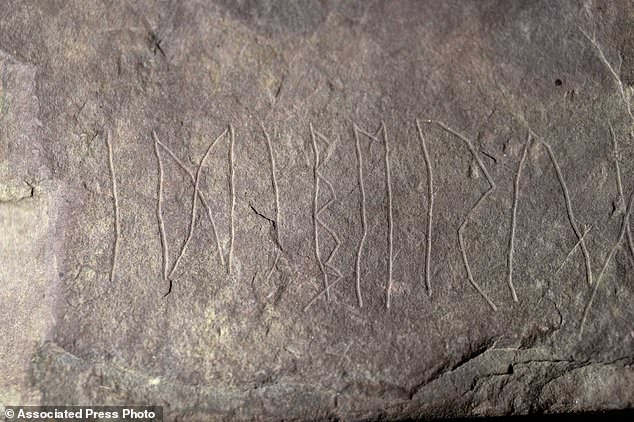 Archaeologists announced Tuesday that a runestone found in Norway is the world’s oldest. It was discovered in an ancient cremation pit

The ancient Norwegian rune stone was found during an excavation of a grave field in Hole municipality, near Tyrifjorden (Lake Tyri) west of the capital Oslo.

Kristel Zilmer, a professor at the University of Oslo, of which the museum is part, told The Associated Press: ‘This find will give us a lot of knowledge about the use of runes in the early Iron Age.

Melting glaciers in Norway have revealed ancient artifacts dropped by a road more than 1,000 years ago.

‘This may be one of the first attempts to use runes in Norway and Scandinavia on stone.’

Runes are a set of characters used to write various Germanic languages before the Latin alphabet was adopted. The Scandinavian variants used by the Vikings are known as futhark.

Around 250 rune stones are known from Viking Age Denmark.

Most of the Scandinavian examples are from Sweden, with over 3000 inscriptions.

The main purpose of runes was to mark territory, explain inheritance, boast about constructions, bring glory to dead kinsmen and tell of significant events

The runestone uncovered in Norway was likely used to memorialize the dead, or it could have been by someone practicing runes on a stone, Zilmer told Science Norway.

‘We needed time to analyze and date the runestone,’ she continued to explain why the finding was first announced on Tuesday.

A famed Viking relic known as the Rök stone was erected in the late 800s near lake Vattern in south-central Sweden and its inscription was deciphered in 2020.

Archaeologists announced in that January that the stone tells of a heartbroken parent’s crippling fear that the cold weather that robbed their child of life may return.

The recent analysis of the mysterious runic inscription claims it speaks of an enduring battle against extreme cold weather in the sixth century. 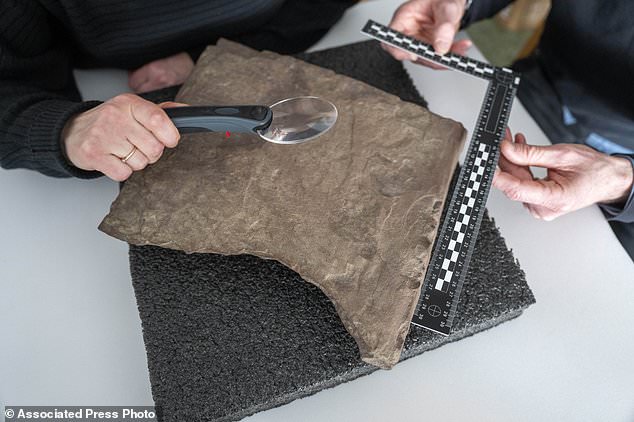 Measuring 312.2 inches by 12.6 inches, the stone has several inscriptions 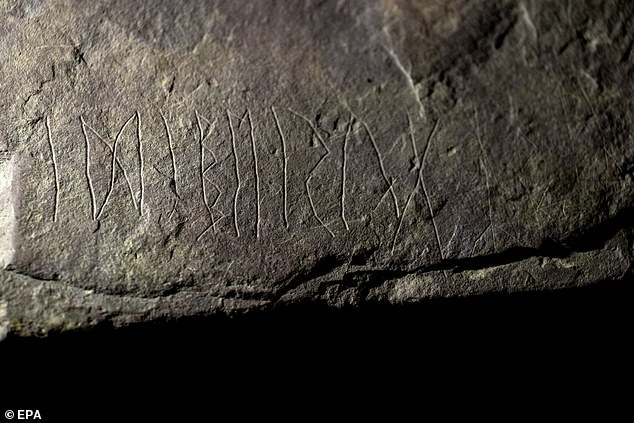 Eight runes on the front could mean ‘For Idibera,’ who may be the individual laid to rest in the pit

It is known that, during the sixth and seventh centuries, more than half of all Scandinavians perished as frigid temperatures caused widespread devastation.

Experts had long been stumped by the more than eight-foot-tall stone, with most theories claiming it is a dedication to the legendary Ostrogoth king, Theodore the Great.

More than 700 runes cover its five sides, and its true meaning has eluded experts as chunks of the rock are missing or worn away.

Some think this references Theodoric the Great, a sixth-century ruler of the Ostrogoths in modern-day Italy. 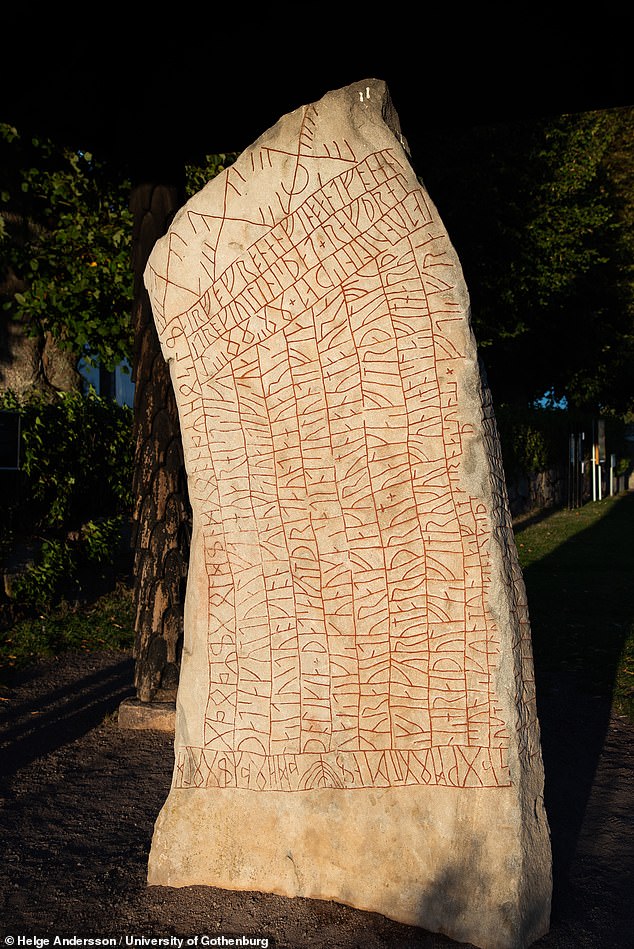 But this claim has been refuted by some experts, with Professor Holmberg of the University of Gothenburg publishing research in 2016 stating ‘the idea that the Rök Runestone mentions the Gothic emperor Theodoric is based on a minor reading error and a major portion of nationalistic wishful thinking.’

As endeavors to decipher the true meaning of the writings continue, a team of experts from three Swedish universities now think it talks of a different topic entirely.

Instead of regaling travelers with stories of a great warrior who managed to rule over much of Europe, it is believed the Rök Stone speaks of a parent’s anguish at losing their child during a period now referred to as the ‘Late Antique Little Ice Age.’

‘The inscription deals with an anxiety triggered by a son’s death and the fear of a new climate crisis similar to the catastrophic one after 536 CE,’ the authors write in the study published in Futhark: International Journal of Runic Studies.