Follow
Home » Science » You should wash your hands for at least 20 seconds, models reveals

You should wash your hands for at least 20 seconds, models reveals

Why you should ALWAYS wash your hands for at least 20 seconds: Mathematical model reveals how viruses and bacteria can remain lodged in crevices even with vigorous scrubbing

If you really want to get your hands clean of bacteria and viruses, you should wash your hands vigorously for at least 20 seconds each time, a study has concluded.

It revealed that the effectiveness of handwashing is related to how vigorously you scrub, but that the process still takes time even when done properly.

According to the NHS, a good way to make sure you’re washing for long enough is to sing ‘Happy Birthday’ to yourself two times in a row while scrubbing away.

Hand washing has long been established as an effective way to combat the spread of disease and infection, its underlying physics had rarely been studied. 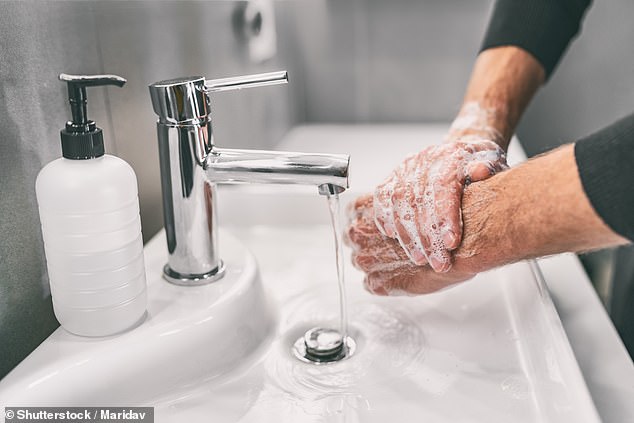 If you really want to get your hands clean of bacteria and viruses, you should wash your hands vigorously for at least 20 seconds each time, a study has concluded (stock image)

WHEN YOU SHOULD WASH YOUR HANDS

You should wash your hands:

Washing your hands properly removes dirt, viruses and bacteria to stop them spreading to other people and objects.

During the COVID-19 pandemic, you should also was your hands before touching your face or facemask, when entering and leaving a public place or touching an item or surface that may be frequently touched by others.

The model considers hands on a microscopic scale, representing the roughness of skin as a pair of wavy surfaces, separated by a thin film of liquid, that move past each other when scrubbing.

Particles like bacteria and viruses end up trapped in the valleys of these surfaces, stuck in what the researcher refers to as ‘potential wells’.

Given this, in order for particles like bacteria and viruses to be dislodged from a hand during washing, the energy from the flow of water must be high enough to get them up and out the valleys.

The model revealed that the strength of this flow is dependant on the speed at which you scrub your hands.

‘Basically, the flow tells you about the forces on the particles,’ said Dr Hammond, who runs a scientific consulting firm based in Bourn, near Cambourne.

‘Then you can work out how the particles move and figure out if they get removed.’

When it comes to ensuring your hands are properly clean, the mathematician explained, the process is much like scrubbing out a stain on a shirt.

The faster the motion, the more likely viruses and bacteria are to be successfully removed.

‘If you move your hands too gently, too slowly, relative to one another, the forces created by the flowing fluid are not big enough to overcome the force holding the particle down,’ Dr Hammond explained.

However, even when one scrubs vigorously, the particles are not removed fast, with the model indicating that 20 seconds of action is needed to get rid of all potential bacteria and viruses.

This, Dr Hammond notes, is in line with common hand-washing guidelines, such as those published by the NHS and the US Centers for Disease Control and Prevention.

Dr Hammond’s fluid mechanics model does not consider the biological and chemical process that occur when you wash your hands with soap.

However, he explained, knowing the physical mechanism that remove particles from dirty hands may help researchers to formulate more effective and environmentally friendly soaps in the future.

‘We need to be a bit more thoughtful about what happens to the wash chemicals when they go down the plughole and enter the environment,’ Dr Hammond said.

The full findings of the study were published in the journal Physics of Fluids.

HOW TO WASH YOUR HANDS

Washing your hands is one of the easiest ways to protect yourself and others from illnesses such as food poisoning and flu.

You should wash your hands for the amount of time it takes to sing ‘Happy Birthday’ twice (around 20 seconds):

If you do not have immediate access to soap and water then use alcohol-based hand sanitiser if available.

for, hands, should, wash, you, Your
You may also like: