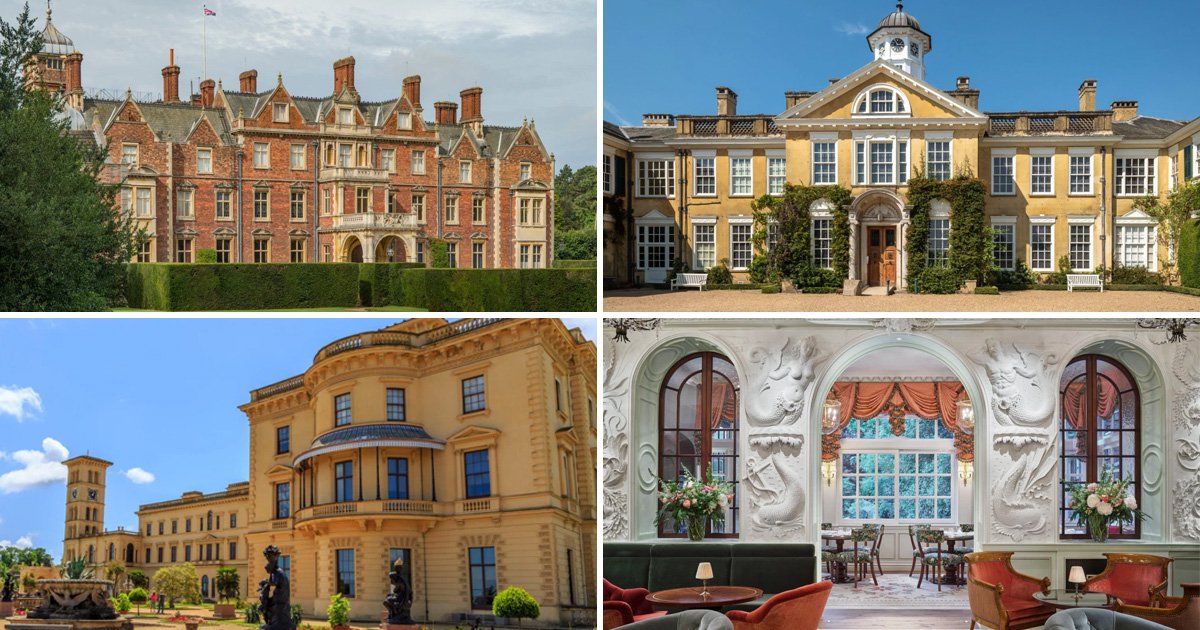 Well now you can – sort of.

Staying in a palace might be a bit out of the average person’s budget, but you can still have a nosey inside as many royal holiday spots are now open to public.

From stately homes to floating hotels, here are some of the most majestic places royals have stayed that you can see for yourself.

When Queen Victoria needed a break from the stresses of court life, she packed her bags for Osborne, her palace by the sea on the Isle of Wight.

Built in the style of a grand Italian palazzo, it features sumptuous state rooms and flowery family rooms, notably the bedchamber where the monarch finally met her maker after 63 years on the throne.

A wooded walkway leads to the private beach where she took a daily dip, her modesty protected by a bathing machine winched in and out of the Solent by several servants.

The 1,000ft-long strip of sand and shingle boasts stonking views across the waters to Portsmouth and is ideal for summer sunbathing, picnicking and yacht-spotting.

Famously, the whole royal family decamp to their country home, Sandringham, for the festive period.

And while an invitation to pop over for Christmas lunch is unlikely to be forthcoming, they do allow commoners to come within forelock-tugging distance by renting out the former head gardener’s house.

The self-catering Garden House, sleeping eight, is bookable year-round (from £808 for three nights/£34pppn) and comes complete with landed-gentry touches such as an Aga and furniture selected from various royal residences.

On the doorstep are more than 200 hectares of woodland and heath within the Royal Park, while Sandringham, the most famous address in Norfolk, is just across the road.

Tickets for house and garden visit from £20pp, click here to book.

Britannia ruled the waves for 44 years before being decommissioned in 1997, marking the end of the British Royal Yacht tradition that dated back to 1660 and the reign of King Charles II.

In almost half a century of service, Britannia clocked up more than a million nautical miles, taking in the honeymoon voyages of four royal couples – including Charles and Di – all of whom went on to encounter stormy weather before their marriages hit the rocks.

It’s now permanently berthed in Leith in Edinburgh so you can have a snoop around the vessel’s five impressive decks, from the engine room and crew areas up to the Queen’s rather chintzy private quarters.

One of the National Trust’s most popular properties, the lavish Polesden Lacey on the North Downs was owned by legendary socialite Dame Margaret Greville.

The Edwardian It Girl entertained seven Indian maharajas and three English kings here, including George VI – better known as Bertie to his friends, or ‘Colin Firth in The King’s Speech’ by modern-day moviegoers.

George spent his honeymoon here with new wife, Queen Elizabeth, the Queen Mother, who described the villa – zhuzhed in fine style by the team behind the Ritz – as ‘delicious’. It’s also worth a visit for the estate’s magnificent walking trails, all boasting views of the Surrey Hills.

Ten years ago, on the night before her nuptials, future queen consort Kate Middleton stayed in the Royal Suite of The Goring, London’s last remaining, family-owned luxury hotel.

The fifth-floor penthouse stylishly combines the old with the offbeat: bedroom walls are lined with the same silk that graced the first-class dining room of the Titanic, while the all-marble bathroom has an original Crapper toilet.

For those who don’t want to splash out on the suite’s princely price tag of £7,500 per night (or a regular room for £435), the cocktail lounge and Michelin-
starred restaurant are equally stately but cheaper options.