DENVER – A ruined honeymoon. A missed birthday. A ski trip hanging in the balance.

Southwest Airlines’ meltdown continued this week at Denver International Airport, which has seen the most cancellations across all airlines of any U.S. airport on Tuesday and Wednesday, according to flight-tracking service FlightAware.

Overnight Monday, an estimated 1,000 people slept at the airport, clutching complimentary blankets and water bottles distributed by airport workers trying to help Southwest passengers cope, said airport spokeswoman Alex Renteria. As of Monday night, about 10,000 bags were waiting to be processed by the airlines, she said.

At the Southwest baggage claim Tuesday, Christmas music played as thousands of people struggled to determine options, winding their way through rows of suitcases, child car seats and ski equipment.

At one point, a Southwest customer service agent made an announcement to people trying to find their bags: “Just go home. They’ll come back eventually, I promise you.”

WHAT TRAVELERS SHOULD KNOW: Nearly 2/3 of Southwest flights canceled

Ryan Williams and his wife, Kassie Novakovich, got up at 3 a.m. Tuesday, hopeful their long-awaited honeymoon trip to Cozumel, Mexico, would happen. But after they were told it was on schedule all morning, Southwest canceled the flight about two hours after they were supposed to have left.

The two returned to baggage claim, waiting in a two-hour line to file a report on their bags, which potentially went to Houston.

“I now have no underwear,” Williams said. “All of my underwear is in my bag.”

After waiting in line to register their missing bags, Williams and Novakovich said they planned to go home. They had looked up alternative flights on United to nearby Cancun – $2,000 for one person, one way. 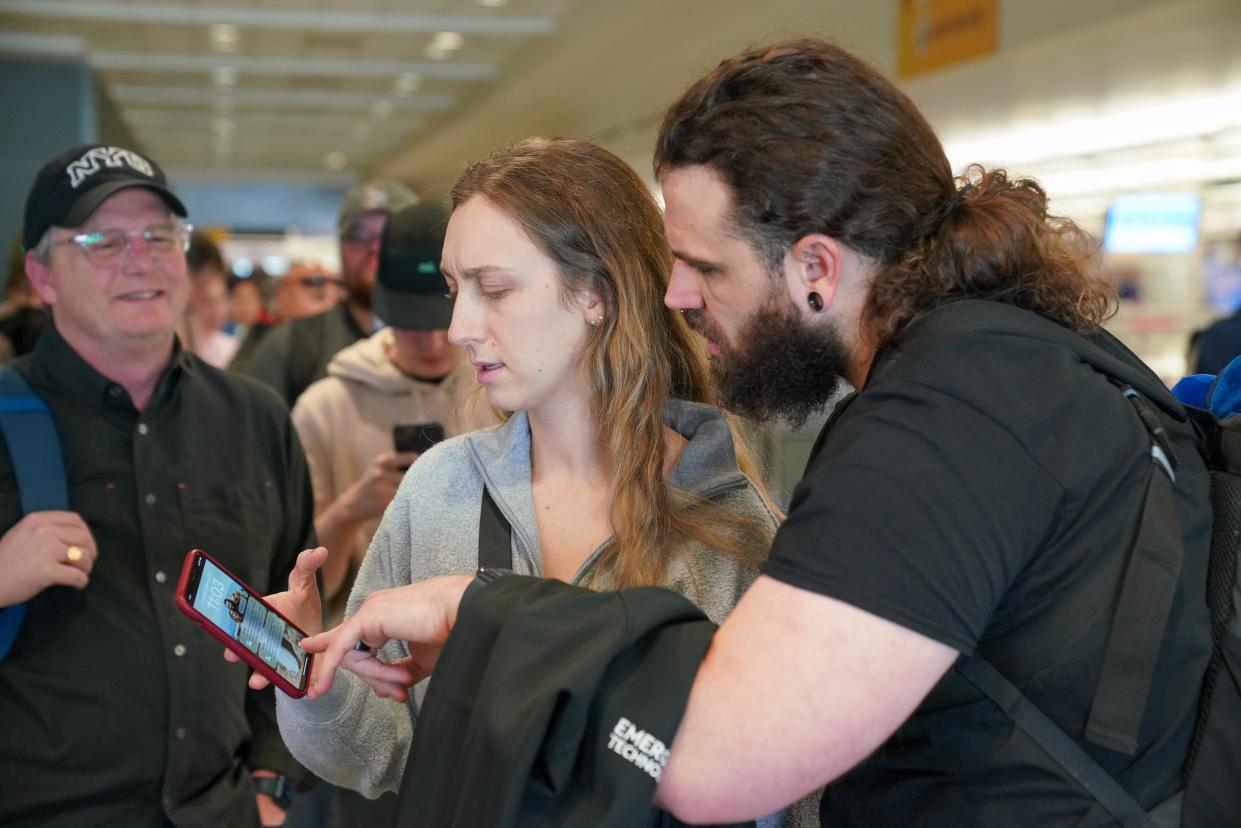 They headed home, honeymoon plans ruined. Southwest told them it might take 30 days for their luggage to return, Novakovich said.

“We just want our bags,” she said.

Lindsey Kirkland, 28, was supposed to fly to Nevada from Denver on Tuesday morning for a friend’s birthday ski trip. She took a $100 Uber to DIA and was told her Southwest flight was canceled because no flight attendants were available.

Kirkland flew home to Denver from Nashville on Monday and said that on that flight agents had offered people up to $1,300 to delay their trip: “They had brought the wrong-sized plane and they wanted to people to get off.”

Kirkland concluded Tuesday that her luck had run out – after her successful flight home Monday, she figured things might be getting back on track. But when she got to the gate Tuesday morning, Southwest canceled her flight and told everyone to go home. Kirkland then waited two hours to file a report on her bags.

“Yesterday I thought I was the luckiest person alive. I guess they’re going to FedEx my bags to me,” she said. “No ETA.” 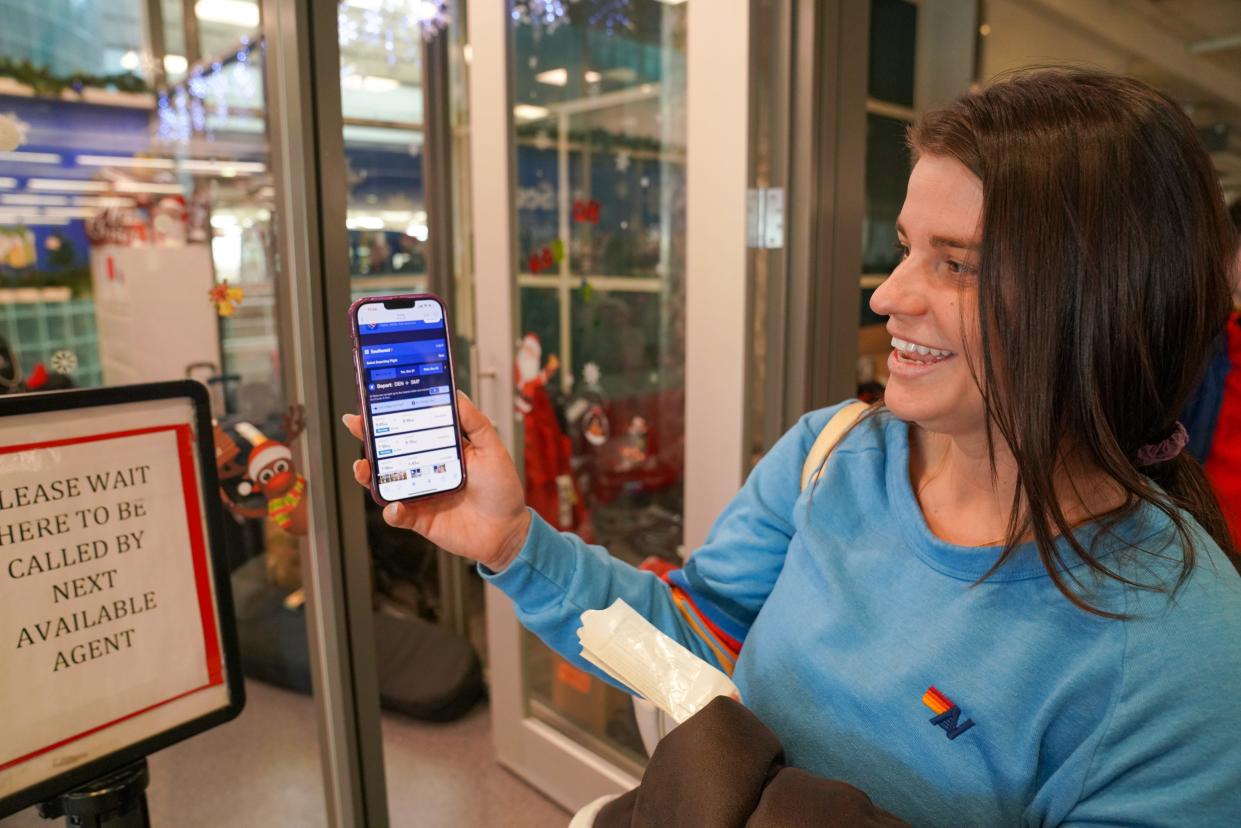 Tom Barham and his two sons arrived in Denver from Atlanta on Tuesday morning, but their bags loaded with ski equipment didn’t make the flight, probably because curbside bag drop took two hours, he said.

After waiting in line for more than two hours, Barham said, Southwest told him their bags should arrive later in the day, inexplicably from Houston.

FLIGHT DELAYED OR CANCELED? What to know and what airlines owe travelers.

Crystal Griffin, 57, took her daughter to Los Angeles for Christmas to visit family and flew back Tuesday midmorning. Although their Southwest flight was delayed about 45 minutes, she said, things otherwise went smoothly.

But as she waited for their checked bags to arrive at the carousel, she was reserving final judgment, she said with a laugh.

“Some people have been stuck in airports since Sunday, so I’m thankful,” said Griffin, a school nutrition worker. 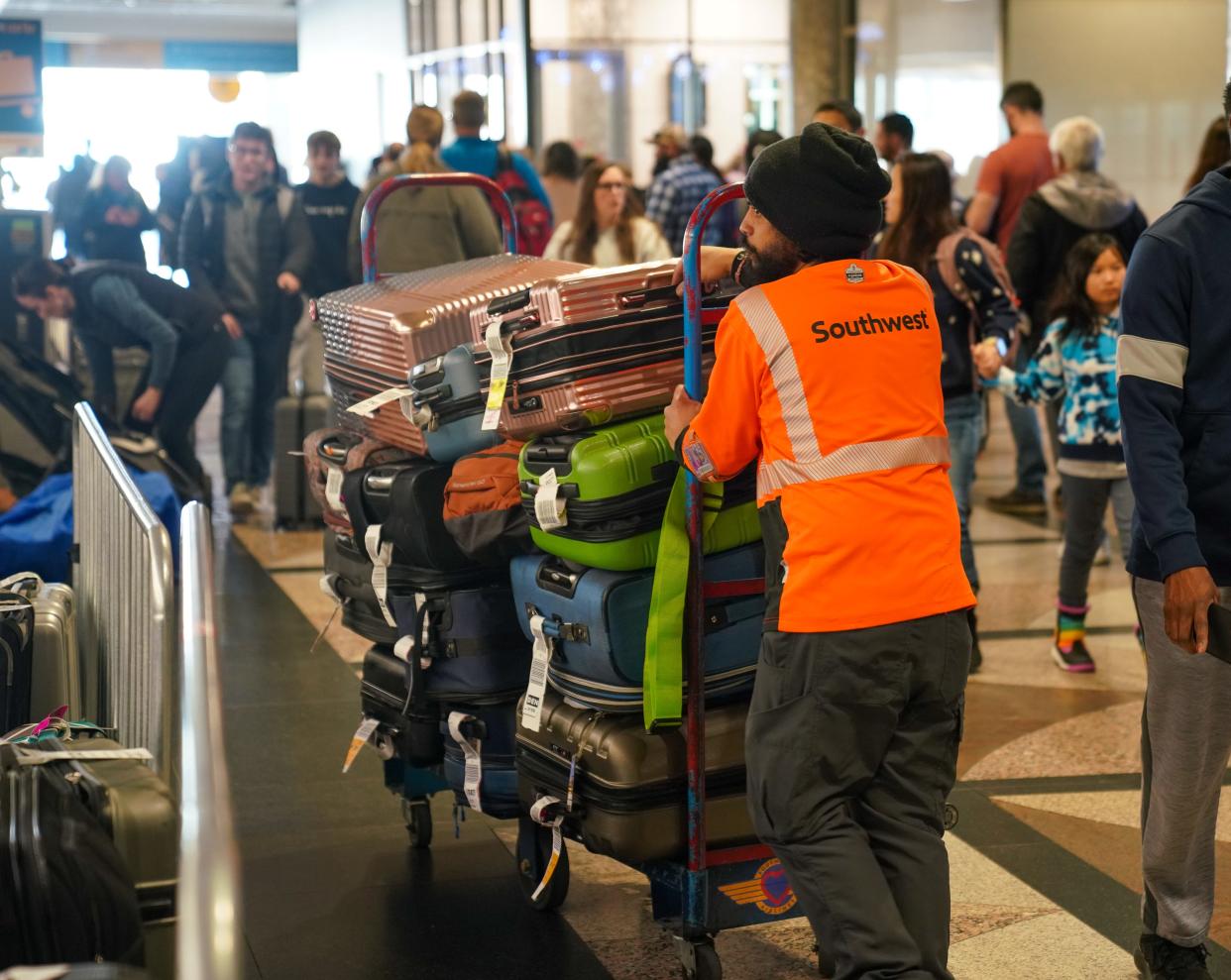 A few feet away, Mariah Burke, 28, rolled her family’s suitcases up to her husband, Kevin, and their dog, Willow.

“It’s a Christmas miracle,” she proclaimed after their Southwest flight from Phoenix arrived without a hitch. “I mean, look at this nightmare.”

Aside from the Southwest meltdown, DIA was otherwise operating smoothly Tuesday, Renteria said. The airport had worked with its restaurant tenants to extend hours to serve people who remained at their gates overnight.

The airport typically sees about 76,000 passengers pass through its TSA checkpoints daily. Southwest is its second-biggest carrier, behind United.

“We understand that this is such a frustrating situation,” Renteria told USA TODAY. “It’s really important that people give others grace and patience because it’s affecting everyone.” 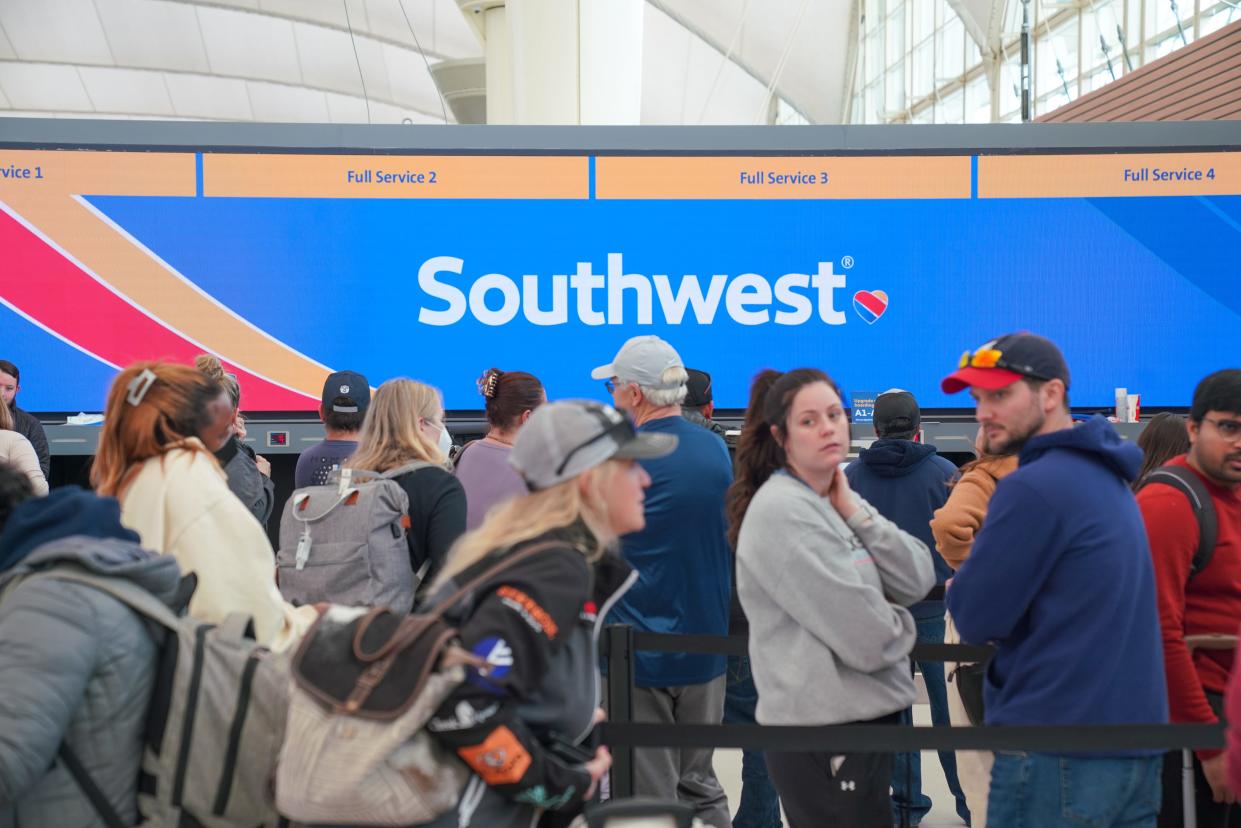