A mother is speaking out about how dangerous respiratory syncytial virus, or RSV, can be as her 2-year-old battles the disease.

Jazlynmae Gonzalez just spent her birthday in the pediatric ICU at the University of New Mexico Hospital in Albuquerque and has been trying to fight off the virus for the last two weeks.

Her mother, Melissa, told ABC News that Jazlynmae was having such trouble breathing that she was intubated and had to spend eight days on a ventilator.

MORE: RSV hospitalizations in seniors much higher than any point in prior seasons

Now, her family and her doctors hope she’s slowly on the mend, though still on oxygen, working to breathe on her own.

“You could see like her ribs, like her skin sucking through like her ribs,” Melissa told Faith Abubey Wednesday afternoon. “She had a lot of shoulder breathing, nose flaring and just like if somebody was running a marathon and just breathing you know hard and fast.” 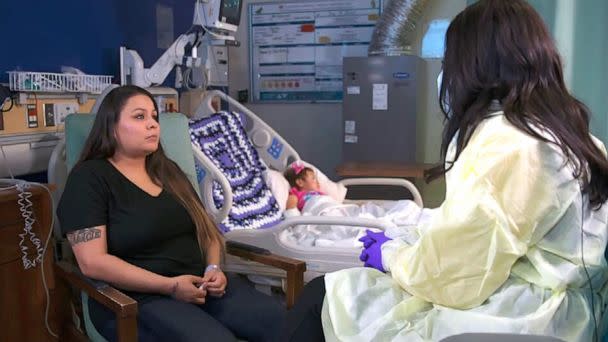 She called seeing her daughter get so sick the “scariest thing” she’s seen.

“Knowing I can’t do anything to make it better, and just do ‘mommy’s little quick fix,’ and just wake her up, and tell her, it’s okay,” Melissa said. “That’s been the hardest thing.”

Over the past several weeks, pediatric hospitals have been reporting they are at capacity or near capacity due to an early surge of RSV cases.

According to the Centers for Disease Control and Prevention, RSV is particularly dangerous among infants and young children, including those with weakened immune systems, have chronic lung or heart conditions or have neuromuscular disorders.

Every year, between 58,000 and 80,000 children younger than age 5 are hospitalized every year and between 100 and 500 children die from the condition.

MORE: Suffering from flu, RSV or COVID-19? How you can tell the difference

Also complicating matters is an early flu season and COVID-19 cases ticking up after holding steady for months,

UNMH staff said the hospital has been struggling to deal with the “tripledemic” and is currently well over 100% capacity.

“It’s hard. Our ERs are full, our waiting rooms are full,” lead pediatrician Dr. Anna Duran told ABC News. “Our physicians are having to examine patients in the waiting room, you know, and we’ve run out of space.”

She continued, “We just have to continue seeing each and every patient, because they will continue to come.”

UNMH said it put up a tent outside of its emergency department on Friday to help relieve some of the strain.

The hospital is in its eighth straight week of the children’s hospital being above capacity — and in recent weeks, it has now seen the same exact thing happen on the adult side, spokesperson Chris Ramirez told ABC News. 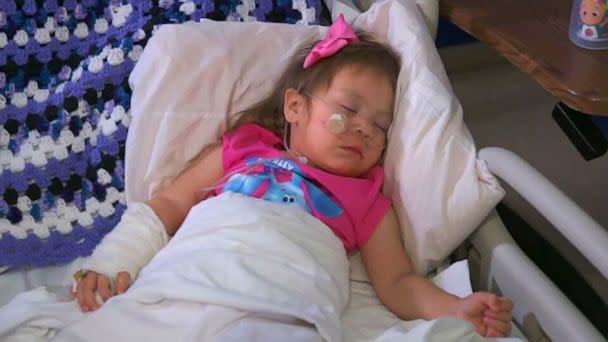 However, data from the CDC shows RSV cases may be receding after peaking in mid-November.

Melissa said she hopes Jazlynmae is home by Christmas and that by sharing her daughter’s stories, other parents can watch for the signs of RSV before it progresses to a serious condition.

“I don’t want another mom, another dad, another sibling to go through what we went through,” Melissa said. “It’s the most heart-wrenching thing to watch your baby go through…and it’s not just a little cold. Because that little cold? I could have lost my baby.”