The Insulate Britain 32: Rogues gallery of the eco-zealots facing two years in prison for breaking High Court ban on blocking roads… while accusing the public of ‘complicity in GENOCIDE’

Insulate Britain today revealed that up to 32 of its activists now face up to two years in prison for breaching a court injunction by blocking traffic on motorways.

Nine of its protesters have already been summoned to the High Court in London on November 16 for breaching the National Highways injunction by disrupting the M25.

Insulate Britain said they face a contempt of court charge and if found guilty could be subject to unlimited fines, seizure of assets and jail sentences of up to two years.

It added that a further 23 activists, who have also defied one or more of the four recent injunctions, are expected to be summoned to court in the coming days.

The activists, who have now caused seven weeks of chaos, were effectively banned from all major roads in England on Monday last week after a major High Court ruling.

Today, one of the protesters from the Extinction Rebellion offshoot urged ‘everyone to examine their conscience and consider whether they want to be complicit in genocide’, adding: ‘If the answer is no, then join us on the motorway.’ 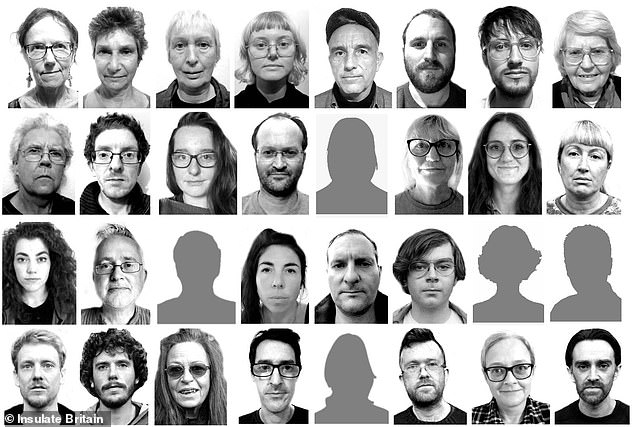 Insulate Britain said the civil proceedings will be presided over by a judge with no jury present and its activists will all have the right to legal representation.

The group also pointed out that if their activists choose to admit contempt and apologise to the court, this will likely reduce the seriousness of any punishment.

However, if they choose to contest it then the hearing is scheduled to last one and half days and the case against all of the first nine supporters will be heard at once.

Theresa Norton, 62, a local councillor from Scarborough, who disrupted traffic on the M56 motorway near Manchester Airport yesterday, said: ‘I don’t do this lightly.

‘But, like the nine who face court and a potential prison sentence, I have to stand up to government bullying; to overcome the fear they instil through threats and intimidating legal bureaucracy. They would rather silence us, than protect the public from climate collapse. 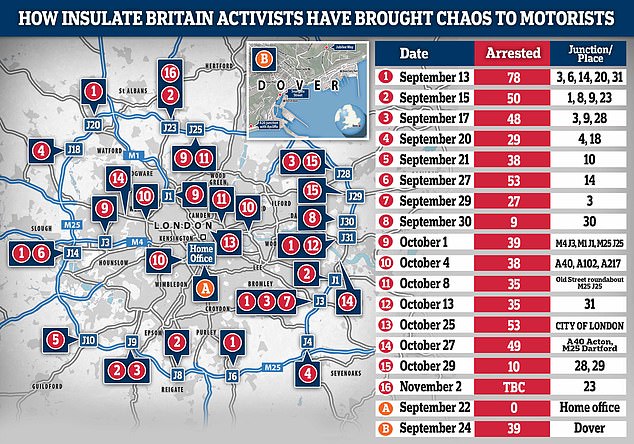 ‘If we are ever to achieve our climate commitments we need to start insulating homes now. I will continue being a part of this campaign and risk being imprisoned or losing my home until our government accepts that it must get on with the job.’

Paul, 46, from Warrington who also took part in yesterday’s M56 disruption, said: ‘I am knowingly breaking a high court injunction by sitting in a road, as the courts in this country are no longer about justice, but are about preserving injustice.

‘Our government will lock us up and leave thousands of people dying of cold this winter.

‘By failing to take the first basic step to reduce our carbon emissions the government is locking in the death of millions from starvation and conflict caused by climate collapse. 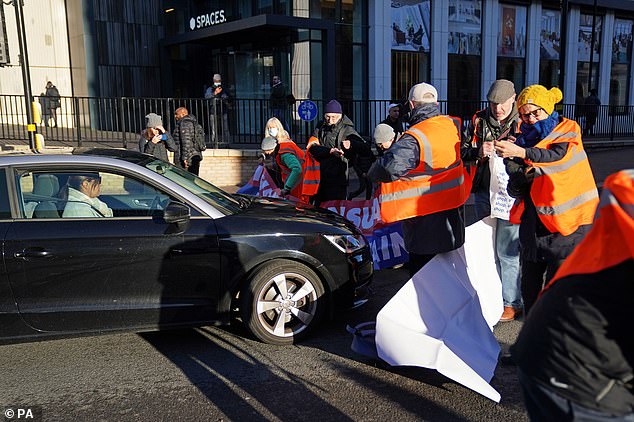 ‘I ask everyone to examine their conscience and consider whether they want to be complicit in genocide. If the answer is no, then join us on the motorway.

‘Nonviolent civil resistance is the best chance we have of achieving the changes we need to ensure the survival of our children.’

And Amy, 36, from Kingston, South West London, who was also on the M56 yesterday, said: ‘I am knowingly breaking the injunction because it is my duty to prevent the horror of both local and global consequences of not reducing our emissions.

‘I beg you to examine the situation closely and support nonviolent civil resistance, in whatever way you can. We have great power when we work together.’

Yesterday, police failed to arrest Insulate Britain activists blocking a busy road near a hospital, instead telling them that they did not ‘want to put good people in a cell’.

West Midlands Police asked the group of protesters to leave the A400 yesterday morning, giving them ‘another ten minutes’ on the road near Birmingham Children’s Hospital before the group ‘dispersed peacefully’.

But despite the force’s softly-softly approach, Insulate Britain returned a few hours later to the streets of central Birmingham, causing disruption as they clogged up the junction once more. 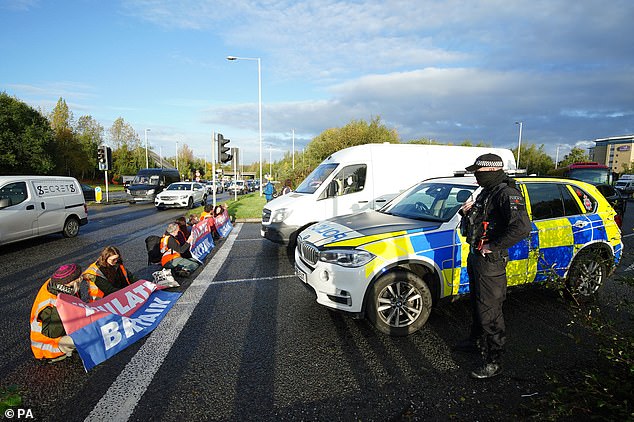 The activists were once again ‘spoken to’ by officers, before agreeing to leave, the force said.

Yesterday’s demonstrations in Birmingham and Manchester were the first time the group has operated north of London.

Greater Manchester Police were forced to spend hours dislodging activists who had glued themselves to the road near Manchester Airport, eventually arresting 11 people.

The group also targeted their normal stamping ground of the M25, with Hertfordshire Police arresting 20 people trying to block Junction 23, and the A1081 St Albans Road slip road. 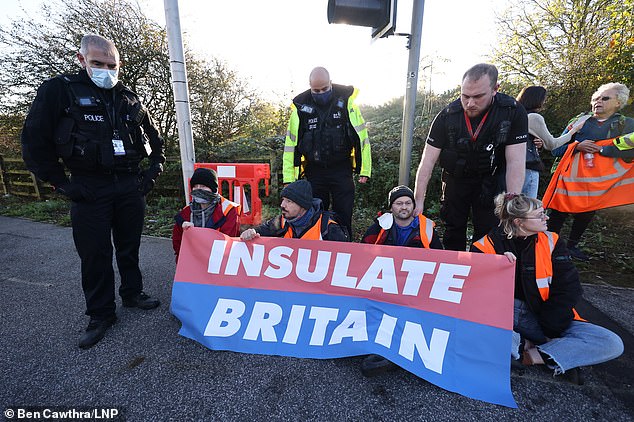 Activists have blocked roads on 18 days since September 13, causing misery for drivers stuck in long queues of traffic.

So far, 161 people have been involved in the roadblock campaign and there have been 770 arrests, excluding Tuesday’s action.

Over the weekend Swedish activist Greta Thunberg voiced support for their tactics, saying sometimes you have to ‘p*** people off’ to protect the environment.

It comes as world leaders and members of the Royal Family continue to gather in Glasgow for the landmark Cop26 climate change conference.

Retired vicar, 79, returns with Insulate Britain and is arrested for ELEVENTH time in just seven weeks

A retired Anglican vicar was yesterday back at the Insulate Britain protests – marking the 11th time she has been arrested in just over seven weeks.

Reverend Sue Parfitt from Bristol, who is also involved with Extinction Rebellion, was taken away from the M25 near South Mimms in Hertfordshire.

It was the fourth time 79-year-old Parfitt has been arrested in the past nine days – having also been detained on the M25 near Brentwood last Friday, Dartford in Kent last Wednesday, and on Bishopsgate in London last Monday.

Parfitt was fined more than £1,500 in July after she took part in two XR road blockades in Parliament Square and at a Ministry of Defence site near Bristol. 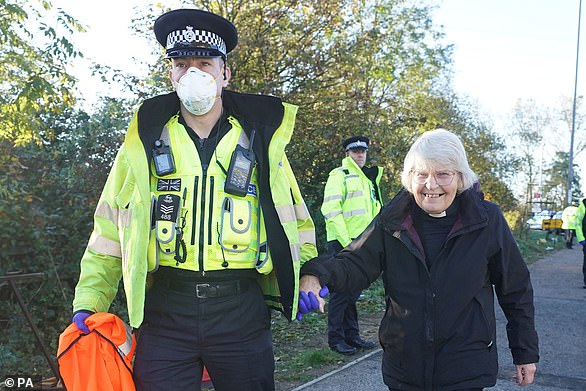 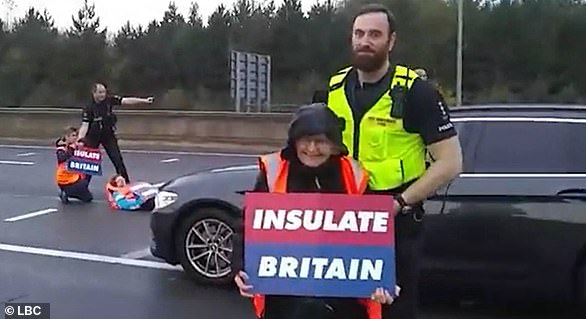 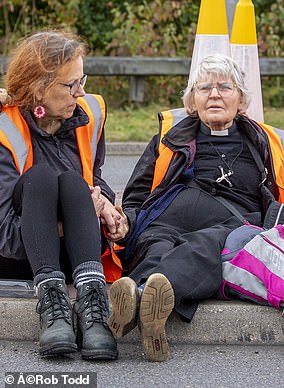 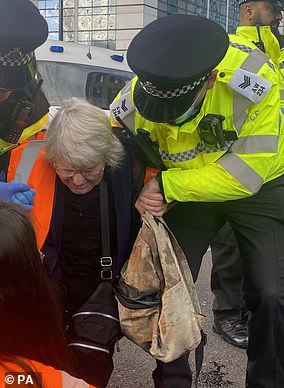 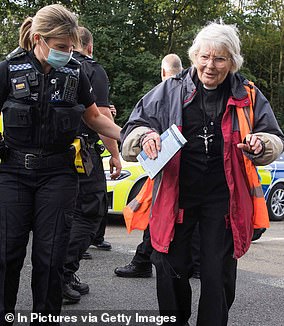 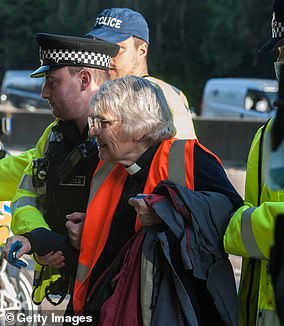 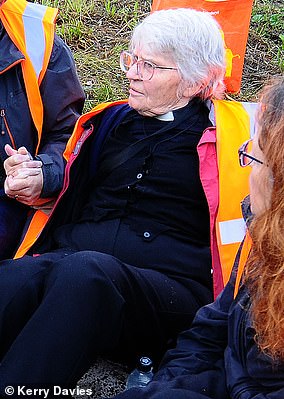 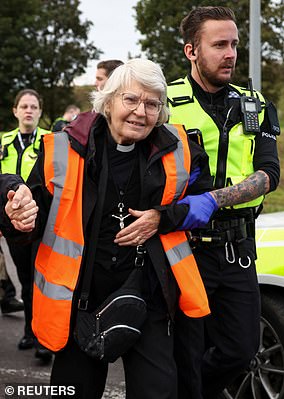