A spokesperson with the Bangor-based Submarine Group 9 told Fox News that, “out of an abundance of caution,” the sailors were directed to a local hospital for an evaluation. 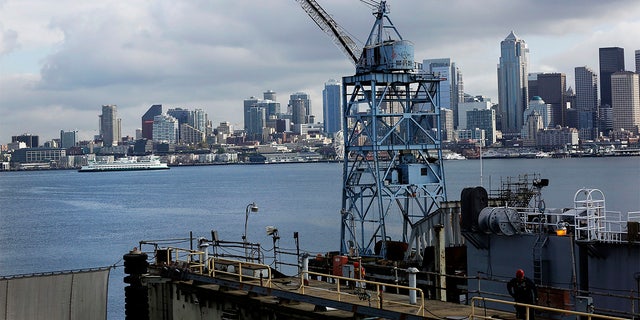 A Washington State Ferry traverses past the city skyline through Puget Sound as seen from the Vigor Shipyard in Seattle, Washington, U.S., on Friday, April 18, 2014.
(Meg Roussos/Bloomberg via Getty Images)

“The Navy and the Submarine Force take the health and the safety of our sailors very seriously,” the spokesperson said.

Two sailors reported “mild symptoms for acute respiratory distress. The other sailors did not report any symptoms. They’ve since been released from the hospital, the Kitsap Sun reported.

The USS Michigan has been docked at the Puget Sound Naval Shipyard in Washington state undergoing what’s known as an “Extended Refit Period,” since July 2019.