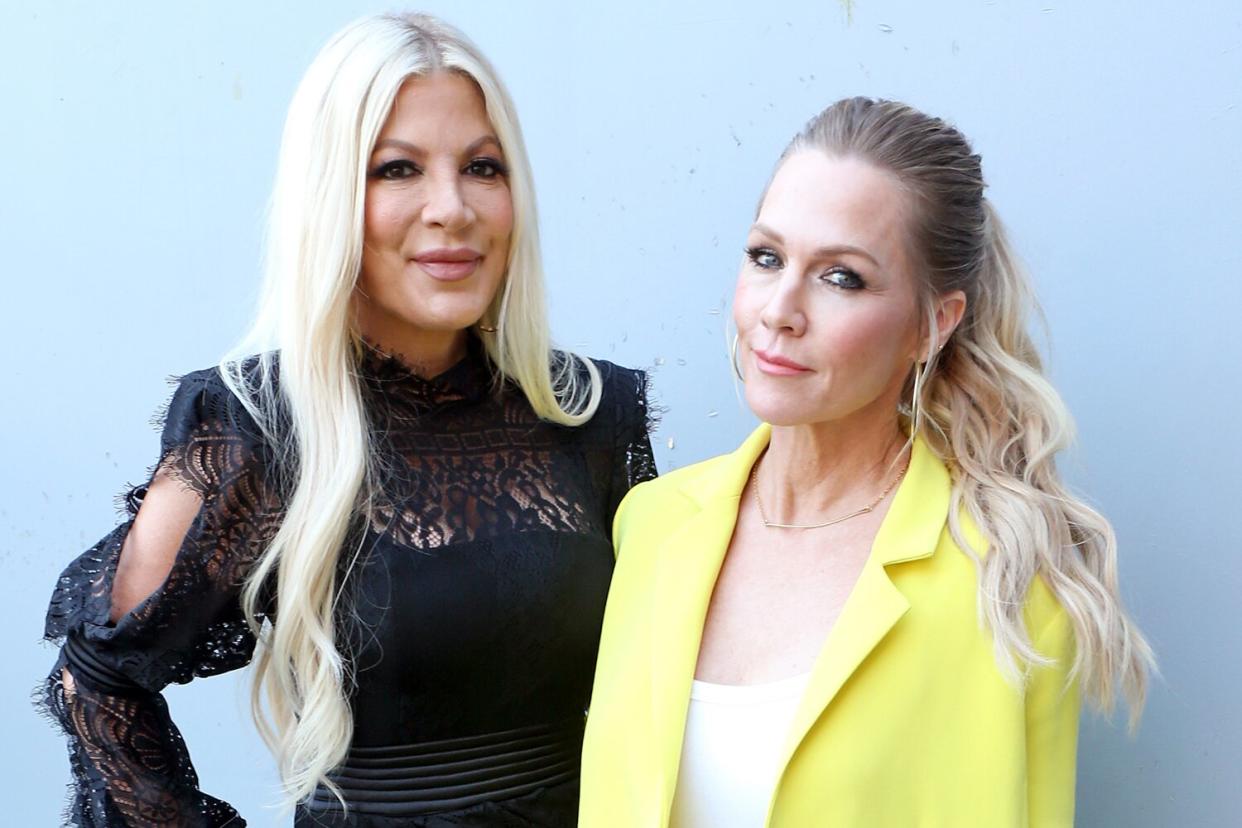 Tori Spelling and Jennie Garth got to revisit the past.

The two recorded the most recent episode of their 90210MG podcast from the Hermosa Beach apartment that served as the fictional home of their Beverly Hills, 90210 characters Donna Martin (Spelling) and Kelly Taylor (Garth).

Spelling and Garth’s characters — along with David Silver, played by Brian Austin Green — lived in the triplex after graduating from West Beverly High on the long-running show.

On Monday’s episode of their 90210MG podcast, the actresses talked about what it was like shooting there with a beautiful view of the ocean.

Garth, 50, confessed that before taping the podcast, she had “never been inside” the three-story building as the cast always filmed outside of it for the ’90s show. The inside of the apartment that was featured on the show looked “oddly” similar to the one on set.

However, Spelling suggested she went inside the home between takes as it was a “holding station” for her and her costars.

Both agreed that the outside “looks exactly the same” as it did when it was on the series.

Reflecting on being back at the home, Garth said, “I literally feel at home. I feel very comfortable.”

Spelling echoed similar sentiments, saying, “It makes me feel very young … The way we’re both sitting on the couch is how we used to sit on the couch, on the set, in the beach apartment. It just reminds me of so many times [we were] just laughing.”

She said it also reminded her of times when Garth was pregnant with daughter Luca Bella, whom she welcomed in 1997.

“I hope they never change this ever,” said Garth. “I wouldn’t mind if they updated some things inside, but I want it to stay the same.”

Garth noted that the beach house currently stands out in its current state as most of the neighboring homes have been renovated. Still, both ladies agreed it could use a little “zhuzh.”

As for how their characters would have been able to afford the home, which they determined is now worth $9 million, Garth pointed out, “Our parents were loaded.”

The beachfront property is also listed on Airbnb for anyone wanting to vacation there. According to the listing, Kelly and Donna’s beach house boasts 270-degree views of the beach and has 136 feet of beach frontage.