A boss you wouldn’t disappoint: I loved our Elizabeth — clever, calm, cheeky

London: It was Queen Elizabeth II’s character that set her apart and made her one of the greatest leaders of our time.

She was a beautiful cornucopia of contradictions – shy yet intensely funny, reserved yet feisty, homely yet statesmanlike, feminine yet tough, a doting wife and equal partner.

She pioneered the concept of work-life balance by understanding that her role was separate to her as a person, embracing her hobbies and making time for them in her busy schedule.

The Queen loved photography and spent hours putting family photographs in her albums. She loved her dogs and her horses. In the winter months she would revel in the births of new foals as they arrived in the cold, early hours. 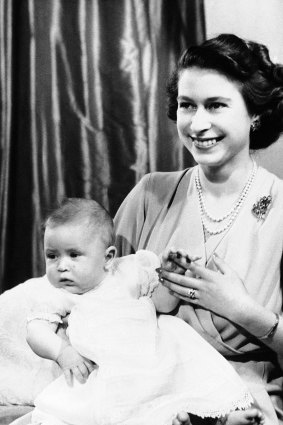 Prince Charles of Edinburgh (now King Charles III), sits for a photo with his mother, then Princess Elizabeth in Buckingham Palace in 1949.Credit:AP/File

She had a fantastic sense of humour and was a great mimic, but her sense of the ridiculous was also finely tuned. Both she and her husband, Prince Philip, thought it was hilarious when things didn’t go according to plan – a flag that got stuck, a plaque that wouldn’t unveil, the Commonwealth Games baton in Glasgow that wouldn’t unscrew.

In Winnipeg, Canada, the royal boat broke down, leaving them adrift on an icy cold river. The vessel had to be lashed to another taxi and towed to the quayside, with the Queen clambering over the rescue vessel to disembark. While the rest of us ran around trying to resolve dramas, they always remained calm.

She was intensely curious and loved life experiences that her role did not permit her to experience, such as duty-free shopping. When she travelled to Australia, the plane would stop in Singapore and silks would be brought to the VIP lounge for her to “shop” with Angela Kelly, her dresser.

In 2002, she wanted to venture into Changi Airport’s duty-free mall. She was absolutely delighted that no one recognised her and thought it hysterical when shop owners started bartering furiously with her. “Lady – you like this necklace?”

She bought a few trinkets and a crowd started to gather as people slowly realised it was her.

In 2014, aged 87, the Queen decided that she had never done a “day trip” to Europe and wondered if this would be possible. She had received an invitation from Giorgio Napolitano, Italy’s then-president, who had written to say he greatly admired her and, would she like to come for lunch? 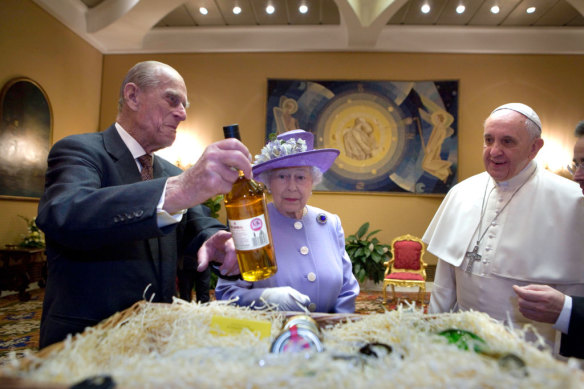 Queen Elizabeth II with her husband, Prince Philip, and Pope Francis during their meeting in the Vatican in 2014.Credit:Getty

She then remembered that she had not yet met the new Pope – Pope Francis – could we fit that in as well?

But two heads of state could not meet informally without the Queen being dressed respectfully in black. Thankfully, the Pope was just as practical, and they agreed to depart from protocol and meet in audience hall in “day dress”. She presented a basket of treats from the royal estates that included eggs, venison and whisky, which the Pope held up joyously.

Boarding the tiny plane to return to London that evening, she smiled and said: “Well, I suppose Rome can be done in a day.”

Queen Elizabeth II was a wonderful boss. Many of her household served for decades. She was kind but authoritative, and no one wanted to disappoint her. She was a great listener and, if you ever “winged” a briefing, would listen patiently until you had tied yourself in knots.

Christmas was exciting, as she took great pleasure in ordering presents for her private office and hand-writing all the cards. Her gifts were practical and thoughtful. All members of the 400-strong workforce received puddings.

Seldom is she acknowledged for her administrative abilities, but she was a brilliant chief executive. She managed to be across the detail of her Head of State work. At the same time, she made sure she had digested all the news for the day ahead and was thinking diplomatically about world events and issues. 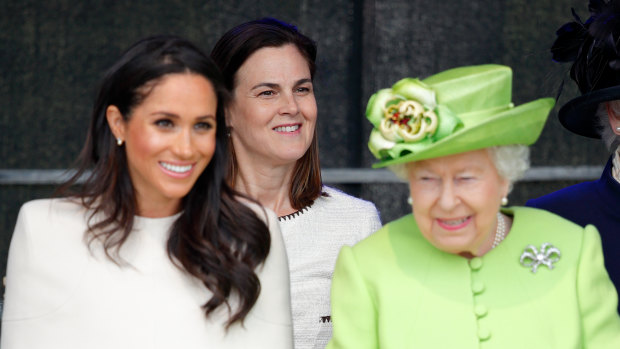 Meghan, Duchess of Sussex, and the Queen with Australian Samantha Cohen, this article’s author, behind them.Credit:Getty Images

Her attention to detail meant she always inspected the tables before a state banquet and approved every menu on every visit. She chose the books for guests when they came to stay at Windsor Castle.

She understood the importance of her people, making it her business to be aware of household gossip and the challenges they faced. She was interested in everyone’s family and their quirks and attributes and was a true matriarch in this sense.

‘Well, I suppose Rome can be done in a day.’

Having visited most Commonwealth countries, from Tuvalu to Trinidad, and been immersed in their cultures, humour and their histories, the Queen had an easy way with everyone that transcended all other issues. She treated everyone as equals.

She was acutely intelligent and exceptionally well-adjusted for someone who did not go through the rigours of school life. Her memory was extraordinary – without the use of computers, she could remember dynasties of names across several countries.

Her French was fluent, despite never having lived there or practised the language from one year to another. On a state visit in 2014, she declined a translator and was happy to converse with then president Francois Hollande about matters of state in French.

The Queen’s sense of fun and curiosity made it easy for her to embrace change. She once sat through a YouTube demonstration and immediately said yes to a royal channel.

When it launched in 2007 with the annual Christmas broadcast, phone calls soon came in from the White House and the Vatican asking if they could follow her lead.

She stoically led us through global wars, social turmoil, natural disasters, terrorism attacks and national crises. She was a woman, a mother, a monarch. She suffered many of the tragedies and challenges that affect all families, yet remained resilient and strong.

Today, everyone is in pain. We are mourning the loss of our emotional anchor, our rock, our North Star. We look forward to the next generation with King Charles III and the work he is doing to enshrine the values of our Elizabeth.

Australian Sam Cohen was assistant private secretary and communications secretary to Queen Elizabeth II from 2007 to 2018.