A failed Voice referendum will kill hopes of reconciliation for good

This year is the most important year in the relationship between the natives of Australia and its so-called settlers in the 235 years since the landing of the First Fleet.

The question that Australians will answer in the coming Voice referendum is whether our country will finally move towards a settlement between the natives and those who took over the continent and established modern Australia. 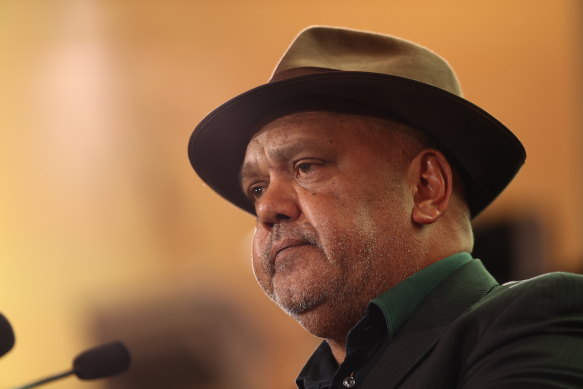 There has never been a settlement. Not when the Britons arrived in 1788, not when the colonies federated to form the Commonwealth of Australia in 1901, not ever.

The new Australia never recognised the old Australia, and still has not in any formal and real sense. Instead, the nation relied on the lie of terra nullius for more than 200 years until the High Court’s decision on native title in the Mabo Case. There has never been formal recognition of Aboriginal and Torres Strait Islander peoples as the First Peoples of Australia.

We are now probably not much more than six months away from voting in the referendum. What will we be asked to endorse with this constitutional amendment? To say yes to the recognition of Aboriginal and Torres Strait Islanders as the First Peoples of Australia by giving them a Voice in their own affairs. That is the “what” of this referendum.

The “why” is because there has been no formal recognition in Australia’s history, and recognition is foundational to reconciliation. 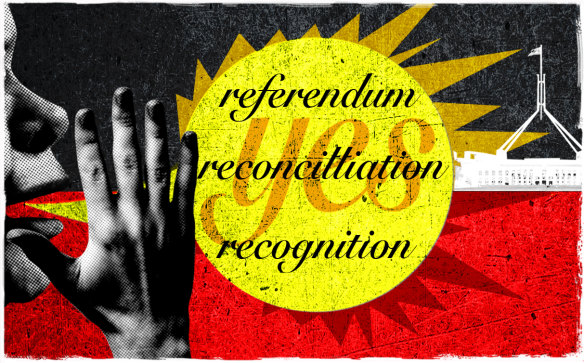 Reconciliation between the descendants of the natives and the settlers – after all the parlous colonial history – requires recognition of those previously silenced and disregarded. In various jurisdictions we were not allowed to vote for many decades. We were discriminated against and treated as if our peoples didn’t matter.

At the Garma Festival in Arnhem Land last August, Prime Minister Anthony Albanese proposed a three-sentence wording for a constitutional amendment requiring parliament to establish a Voice for Indigenous Australians to have a say in our own affairs. The three sentences were preceded by the following introduction: “In recognition of Aboriginal and Torres Strait Islanders as the First Peoples of Australia.” This is the point of the referendum!

Modern Australia is like a magnificent structure that generations of Australians – settlers, natives and migrants – have built over two centuries. Our country is an achievement as great and unique as the Opera House, one even the natives are ineffably proud of. And yet the foundations of our national achievement are faulty.

The Uluru Statement from the Heart is the true foundation stone of a united Australia, and this referendum promises to bring together the natives, the settlers and the migrants as Australians. 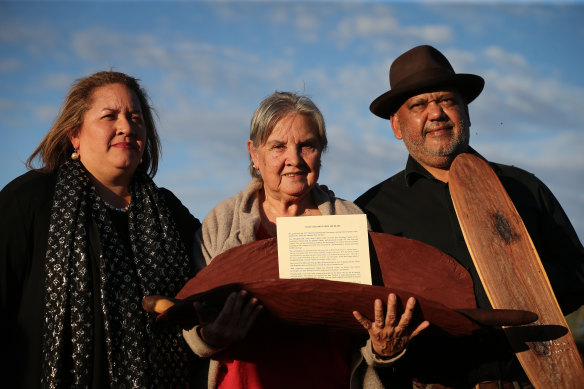 Indigenous advocates Megan Davis, Pat Anderson and Noel Pearson with a piti holding the Uluru Statement from the Heart, which called for a Voice to parliament.Credit:Alex Ellinghausen

Without recognition, Aboriginal and Torres Strait Islander cultures and identities are under an existential threat. How else can you describe the situation of a cultural grouping in Cape York Peninsula where 1 in 10 of their community is in prison today?

The Voice referendum answers the “how” of recognition. How will we recognise the First Peoples? By Australians voting yes to requiring parliament to establish a Voice in our own affairs. The Voice is how recognition is effected.

It is also how we will eventually – with much hard work, determination and partnership – one day close the gap. As the former vice president of the Liberal Party, Karina Okotel, pointed out in this masthead last year – the current violence in Alice Springs could have been prevented if governments had been constitutionally compelled to hear the voices of local communities. Local communities had warned of the harm that would follow the removal of alcohol bans. The governments did not listen. Until we have a constitutional voice, the cycle of misery caused by top-down and tone-deaf policymaking will not end.

This is about creating a partnership, and embedding that principle in the Constitution, which will be permanent and authoritative.

If the opponents of recognition succeed with their cynical campaign of diversion and obfuscation, then they will kill reconciliation. This is the danger that Opposition Leader Peter Dutton and Liberal MP Julian Leeser are courting. By playing a spoiling game, the federal opposition will be responsible for destroying the three-decade quest for reconciliation.

I say to Australians: do not make Aboriginal and Torres Strait Islander peoples pay for the failure of the politicians to work constructively on this. Indigenous people came up with a pragmatic and sensible proposal, and it is at risk of being killed by partisan politics.

I do not believe it will fail. I have faith in the Australian people. There are too many Australians, across the political spectrum, who believe this opportunity is too important to miss. Australia will change – fundamentally – after the referendum.

It will change for the better if we achieve recognition. Because we will start a new chapter and leave the settler-versus-native polarity behind us. We will embark on a new era of unity based on recognition of the three stories of Australia – Indigenous foundations, British institutions and multicultural migration.

I shudder to think of an Australia that rejects recognition. All I can see is a future of perpetual protest and struggle because Aboriginal and Torres Strait Islander peoples will forever be outsiders in their own country. The so-called subalterns of a country steadfastly committed to seeing itself as a colony rather than a nation.

This won’t happen, though. Australians will see past the game-playing and spoiling tactics of the politicians. If not, Dutton and the Liberals will be held responsible for the failure. Fight about cost of living, fight about economic policy, fight about any other policy area, but don’t fight on recognition of First Peoples. It’s not fair, and the questions at stake are too important for the country.