London: In fewer than 40 days Liz Truss has lost her chancellor, her signature tax cuts and all authority­­­ as British prime minister. The next thing to go will more than likely be her.

It is a remarkable feat and, it shouldn’t be forgotten, that 12 of those days were, in fact, during a national mourning period for the Queen, when government all but ground to a halt. Her progression from chocolates to boiled lollies really has been swift. 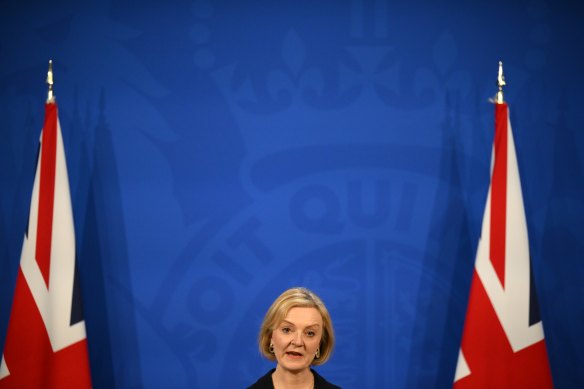 And if Truss thought she could save her job by firing her close political ally and friend Kwasi Kwarteng, it took only another eight minutes of a disastrous press conference for anyone left questioning whether she was terminal to be reassured.

After three weeks of market chaos, soaring interest rates and plummeting poll ratings she has found that her much vaunted growth strategy has few very friends, including those who are sitting around her cabinet table.

But perhaps the most important point to make about Truss’s premiership now is that there doesn’t seem to be any point to it.

Truss won the party leadership vote on an agenda of radical economic agenda which she has now shredded. She ruthlessly mocked the warnings of her rival, Rishi Sunak, on what would happen to mortgages under a scenario of mass borrowing for tax cuts as “project fear”. 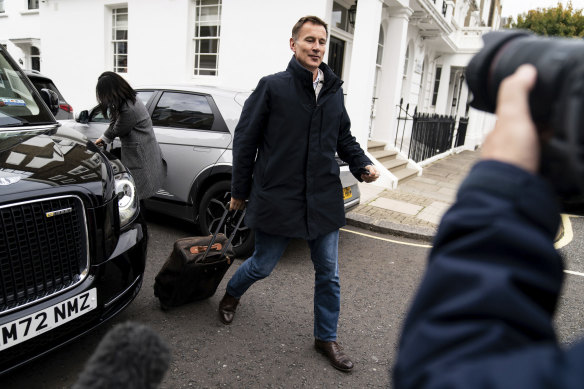 Jeremy Hunt arrives at his home in London after he was appointed Chancellor of the Exchequer following the resignation of Kwasi Kwarteng.Credit:AP

The 30-year yield ended the week at about 4.8 per cent, having earlier sunk as low as 4.2 per cent — large swings for a market that typically only moves in small increments.

By abandoning her plans to hold down corporate taxes, she has adopted Sunak’s economic strategy — the one she denounced just weeks ago.

It was her promise of low-taxes, and a smaller state which clinched victory. And now that it is dead and buried, what is her purpose? 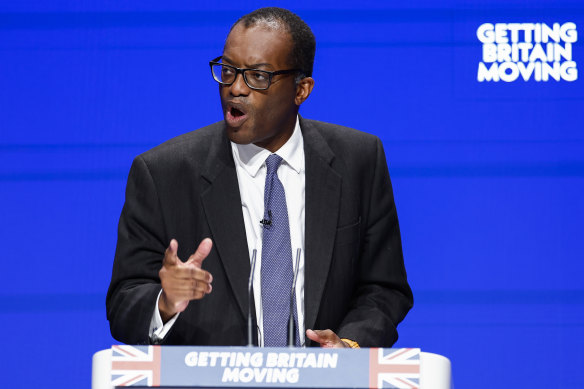 She has lost all authority, not just within Britain’s financial sector, across the nation but within her own parliamentary party. And she was coming from a low base as it was, during the ballot of MPs Sunak won 137 votes, versus Truss’s 113 and Penny Mordaunt’s 105. But it was Truss who emerged victorious head-to-head with Sunak, winning 57 per cent of the party members (81,326 votes) to his 43 per cent (60,399 votes).

In fewer than 40 days she has, if you believe those in the know, reached the threshold of Conservative MPs to hold a vote of confidence in her leadership. Only some sort of sympathy vote would likely prevent her from losing that now.

Truss will be hoping that her MPs don’t like the idea of another Tory leadership contest because unless she quits – which she has vowed not to – that’s what the country will get. And voters are unlikely to look kindly on a party agonising over the choice of a third prime minister since Boris Johnson.

Since David Cameron resigned after he was on the wrong side of the Brexit vote in 2016, the UK has started to resemble Italy – or more to the point Australia – in terms of its leaders, with Theresa May, Johnson and Truss all making their home at 10 Downing Street in the years since.

With the Conservatives now between 20-30 points behind the Labour opposition in a handful of polls – many MPs have nothing to lose by attempting to oust her because they never supported her in the first place.

The idea of a Sunak-Mordaunt unity ticket was gaining ground on Friday, but some supporters believed Truss’s decision to dump Kwarteng and install Jeremy Hunt, from a more moderate faction of the party, has bought her more time.

And if time is a problem, is it that there is far too much of it left? There are still more than two years left before an election and the Conservatives have a parliamentary majority of 80 seats. There are no reasonable grounds for an election so; somehow, they are going to have to make it work.

The problem for Truss is that you only get one chance to make a good first impression and Britons and her MPs have had a look and seem unlikely to change their minds.

Her disastrous, unapologetic and wooden press conference showed she is a poor communicator and that winning back voters will be impossible. And perhaps what is worse, she has been shown to possess terrible judgment.

Having vowed she was “not for turning”, a nod to her political heroine Margaret Thatcher, she’s now turned multiple times without any sense of remorse.

Truss needs to hang on until the start of next year to avoid her premiership becoming the shortest in British history. The person who currently holds the title is the Tory statesman George Canning, who spent 118 full days as Prime Minister in 1827 before dying in office from ill health.

There will be many excuses offered as to why she shouldn’t be removed from office, but it is clear there are no longer any reasons to keep her there either.