Prime Minister Scott Morrison will attend a service at St Andrew’s Cathedral on Sunday as avowed Australian republicans and committed monarchists alike paid tribute to Prince Philip as a man of charm and candour whose long life was devoted to duty and service.

The Duke of Edinburgh was also remembered by notable Australians as a man devoted to his wife, Queen Elizabeth.

Mr Morrison led tributes and offered the deepest sympathies of Australia to the royal family.

“Memories of him will of course tell stories of his candour, and a unique and forceful and authentic personality,” he said. “But above all, he was a man who was steadfast, who could be relied upon, always standing by his Queen.”

Flags across Australia were flown at half-mast on Saturday and there was a 41-gun salute outside Parliament House on Saturday afternoon.

Mr Morrison signed the Governor-General’s official condolence book, writing: “Jenny and I pray that you will draw great peace and comfort from your deep faith at this time of sorrow.

“The duke was a steadfast man, a man of honour, service, duty and loyalty. We give thanks for his life of service.”

Mr Morrison said the duke embodied a generation that “we will never see again”.

“Australians send our love and deepest condolences to Her Majesty and all the Royal Family,” he said. “The Commonwealth family joins together in sorrow and thanksgiving for the loss and life of Prince Philip.”

Mr Morrison said Australians could register their condolences on the Department of Prime Minister and Cabinet website and they would be passed onto the Queen. He also urged local and federal MPs to make hard copy condolence books available to their constituents, particularly elderly residents, for people to sign in-person. 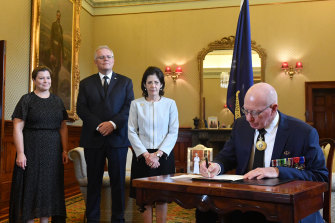 Prince Philip visited Australia more than 20 times, first as a British naval officer during World War Two. He was also present at important moments in the country’s history such as the opening of the Melbourne Olympic Games in 1956, the Sydney Opera House in 1973 and Parliament House in 1988.

Prince Philip was the patron of almost 50 organisations in Australia, including The Duke of Edinburgh Award Scheme, a youth development program for 14-24 year olds.

The Queen’s representative in Australia, Governor-General Sir David Hurley said Australians should give thanks to Prince Philip for a lifetime of service, devotion and commitment.

Past Australian leaders also paid tribute to Prince Philip on social media, with Tony Abbott, who controversially knighted the duke in 2015, saying he “combined great character with being a dutiful royal”.

Former prime minister John Howard said Prince Philip balanced the dignity of office with easy informality and could “walk with princes, yet keep the common touch – and he did that brilliantly”.

Mr Howard said the duke’s mannerisms and demeanour “went down well in Australia”.

He said the duke had a great sense of humour and “gave short shrift to political correctness when he encountered it, and that endeared him to millions of people”. “So far from those responses constituting gaffes, they were things people warmed to.”

Labor leader Anthony Albanese said Prince Philip had become “an enduring part of the story of our nation”. “He lived a long and truly remarkable life and built a lasting legacy – not least of which the Duke of Edinburgh’s Award scheme,” Mr Albanese said.

NSW Premier Gladys Berejiklian said the duke had a strong and lengthy relationship with the state, which he had visited many times. “While we mourn his passing at the age of 99, it is the occasion to offer thanks for a very long and dedicated life of service,” she said.

a, man, minis, Prime, steadfast
You may also like: