The sun shone and the beer was cold. The yarning was a sport in itself, and it seemed the racecourse at Towong was the centre of the universe on Saturday.

The Towong Turf Club was turning 150 years old and after devastating bushfires, followed by COVID-19, the small community, near the Murray River 130 kilometres east of Wodonga, was more than ready to party at the annual Towong Cup horse races. 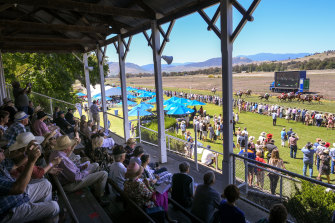 And they’re off at TowongCredit:Eddie Jim

A wind change and firefighters stopped the beautiful 1911 grandstand from being razed by the January 2020 bushfires, and on Saturday the grandstand was resplendent amid the graceful elm trees that sheltered over 1500 punters.

Horses were cancelled at the 2020 Towong Cup races, two months after the fires, after an 80mm dump of rain flooded the track, and yet in true bush spirit, 3000 locals had a party anyway.

On Saturday the gee-gees were back, with the 2021 Cup winner, five-year-old gelding Sizzleonthebridge.

Sisters Phyllis Boardman, 93, and Joyce Miller, 90, of Corryong, were having a thoroughly good time at a table under the elms at an event they have attended all their lives. In the 1940s their father Alf Eastlake, the Corryong mechanic, would help start the horse races — in the days before starting stalls, a bell would sound and a rope in front of the line of horses would drop.

Race caller Matthew Jones, 44, said it was the excitement of sitting in the Towong racecourse grandstand as an eight-year-old listening to the caller perform live a few metres away, that drew him to the craft. 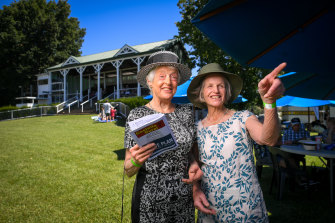 He grew up in Eltham in Melbourne but would visit his grandparents Bob and Joyce Giltrap in Tallangatta Valley, 90 kilometres west of Towong.

The Giltraps were dairy farmers but once in the mid 1980s a horse they owned, Bay Matt, won on Towong race day. Mr Jones said the Towong Cup day “is to me, is what racing is all about.

“It’s the country atmosphere, locals getting together and chatting, people who haven’t seen each other for a year. It’s brilliant.”

Towong Turf Club committee member Dixie Coutts had a good catch-up with her sister, Wendy Heal, who moved to Euroa 45 years ago, but returns for the Cup every year.

Their father, Tom Waters, was Turf Club president from 1959 to 1976. Mrs Deal says on Cup Day “you usually got a new dress, and if Dad had a runner, it was terribly exciting.” A mare owned by her family, French Diamond, came second in 1980. 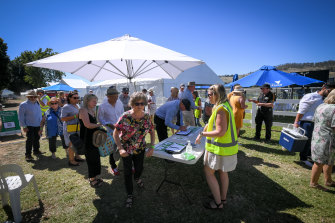 Fun at the cup.Credit:Eddie Jim

The Cup has had a rich history. In 1928, someone stole the entire day’s takings. Two jockeys whacked each other with whips at the finish line, and the brawl continued into the jockeys’ rooms.

In 1891 a local horse, Glenloth, bred and owned by James Sutherland, from Lockharts Creek near Tallangatta, was the toast of the track when he won the Towong Cup. But due to the Depression, Glenloth was sold to a Melbourne milkman and it won the 1892 Melbourne Cup, as a 50 to 1 outsider, on a muddy track.

In 2007, Julie Madgwick, a great great granddaughter of James Sutherland bought back the Melbourne Cup trophy for $168,000.

In 1982, the Towong grandstand featured in the movie Phar Lap and in recent years local lobbying saved the structure from demolition.
Ms Coutts, whose great-grandfather TB Waters was on the Turf Club’s founding committee said the Cup continues, “because of the determination of the people to keep it going.

“Through the years there has been such determination shown by the committee and the crowd which supports us every year. The whole community really gets behind it. And that is what has kept it going. And I believe it will last”.

after, Race, Times, Tough, Towong
You may also like: