Yasmin Poole still remembers her shock at seeing the zero.

She was a 19-year-old youth activist with girls’ equality charity Plan International, working on research that examined 2000 young Australian women’s aspirations for their future.

Of those aged 18-25, 0 per cent listed politics as a future career option. 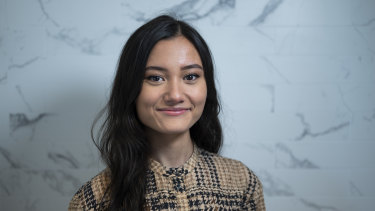 It was 2018; these young women had grown up watching Australia’s first female prime minister ridiculed for her “big arse”, her empty fruit bowl and the fact she didn’t have children.

The She Can Lead report found more than half of the young women surveyed thought female politicians were treated unfairly by their male colleagues.

“It was really the foundation of what started my passion around young women in politics,” Ms Poole says.

“It led me on this journey into understanding the media’s treatment of women, which can be pretty sexist, it led me on a journey of unpacking what happened to Julia Gillard.”

Now, at just 22, Ms Poole is juggling being the national ambassador for Plan Australia and a non-executive board director of food rescue charity OzHarvest and YWCA with a double degree in law and international relations.

She was the inaugural chair of the Victorian government’s Youth Congress, which advises the government on youth policy, and speaks at forums such as APEC and the G20.​

In 2019 she was listed in both the 40 Under 40 Most Influential Asian Australians and the Australian Financial Review’s 100 Women of Influence. 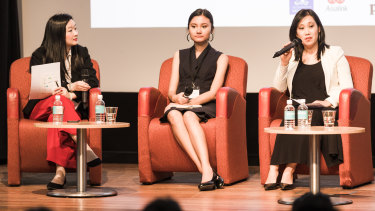 Yasmin Poole (centre) at the AsiaLink Leaders’ Summit when the inaugural 40 under 40 most influential Asian Australians were announced.

And in January Ms Poole received an email telling her she had won the global Youth Influencer of the Year award from the US-based King Center, which honours the legacy of Martin Luther King.

“I didn’t even know if it was a legitimate email because I couldn’t quite believe they had picked me.”

She watched the ceremony (online due to COVID-19), agog as Oprah made a speech and the three founders of Black Lives Matter – Patrisse Khan-Cullors, Opal Tometi and Alicia Garza – and Lady Gaga picked up awards.

“I was like ‘What on earth am I doing here?’ Even seeing my name on the program was just insane but I figured it was a chance to talk about all the work of young women of colour, especially in Australia, who are pushing for change.”

Dr Blair Williams, a research fellow with the Global Institute for Women’s Leadership at the Australian National University, counts her alongside Grace Tame, Brittany Higgins, Saxon Mullins and Latoya Aroha Rule in a list of nine Australians fighting for gender equality and making a difference.

“It’s fantastic to see her speak out against the injustices in recent months, but also the general injustice of the complete lack of representation of women, particularly young women in politics,” Dr Williams says.

“There are hardly any politicians under the age of 30 and I find that fact actually shocks my students quite a bit. I think it’s great to see a young woman, particularly a young woman of colour, be one of those voices that we see on the TV telling a young perspective, and seeing that represented on shows like Q&A or The Drum,” Dr Williams says.

In June last year, during a discussion on Q&A about whether the government had favoured men in its response to COVID-19, Ms Poole crisply suggested to fellow panellist and government minister Paul Fletcher that it “just goes to show there are not enough women in your party”.

“If I can give you some tips, the first thing we need is gender disaggregated data around COVID-19 to understand how it is disproportionately affecting women, we then need a gender responsive budget to compensate that unfair economic structure, and when we talk about the economic impact of COVID-19 we also have to talk about the unpaid work economy and the informal work economy which women disproportionately make up.”

“[This] is why, increasingly, young women my age are refusing to pursue a career in politics,” Ms Poole wrote in The Age at the time.

But even then Ms Poole says she would never have imagined the allegations of sexual assault that have roiled Australian politics in the past few months.

“At the time I was talking about the treatment of female politicians but even I back then could never have thought everything that would be revealed about Brittany Higgins’,” she says.

“I had maybe naively assumed that young women would be kept safe in that sense, the only thing that we had to deal with was sexist comments and general mistreatment. I had a better perception of the treatment of women than I do now.”

She believes Australia is facing “a moment of accountability”.

“I don’t know if that accountability will lead to politicians taking long-term action in the sense of actually changing our institutions but I do think it’s a moment where women saw crystal clear, the current state of gender inequality in Parliament.”

This year Ms Poole wrote the foreword for We Can Lead, Plan International’s latest report on young people’s views on sexism and misogyny in politics in 2021 and what needs to change.

Its recommendations – which were drafted by this year’s nine youth activists – include quotas in political parties, investing in emerging leadership programs for girls in high schools and education around consent.

“One of the recommendations that stood out to me was calling for independent structural reforms in Parliament to make sure that women and young women especially can have safe avenues to report sexual assault and violence,” Ms Poole says.

So does she see a future for herself in politics?

In the short term Ms Poole is waiting for the outcome of sex discrimination commissioner Kate Jenkins’ review into Parliament’s workplace culture. She wants to continue fighting for women’s participation in all areas.

“I think it’s definitely an option but I will wait and see.”