‘There was ketchup dripping down the wall’: Mark Meadows aide Cassidy Hutchinson says Trump threw his LUNCH after learning Bill Barr said there was no election fraud – and claims ex-president would rip the cloth from tables and spill the contents

Hutchinson, a 25-year-old former White House aide who worked under Chief of Staff Mark Meadows, said she remembered ‘hearing noise’ shortly after an Associated Press article came out that quoted Attorney General Bill Barr – who said there was no evidence of widespread 2020 election fraud, like Trump claimed.

Meadows, she said, was summoned to Trump’s office and when he returned, she walked toward the White House dining room.

‘And I noticed that the door was propped open and the valet was inside the dining room changing the tablecloth off of the dining room table,’ she said. ‘He motioned for me to come in and then pointed toward the front of the room near the fireplace mantel and the TV.’

‘Where I first noticed there was ketchup dripping down the wall,’ she continued. ‘And there’s a shattered porcelain plate on the floor.’

‘The valet had articulated that the president was extremely angry at the attorney general’s AP interview and had thrown his lunch against the wall,’ she said, explaining that she then helped with the clean-up.

‘There were several times throughout my tenure with the chief of staff that I was aware of him either throwing dishes or flicking the table cloth to let all of the contents of the table go onto the floor and likely break or go everywhere,’ Hutchinson volunteered. 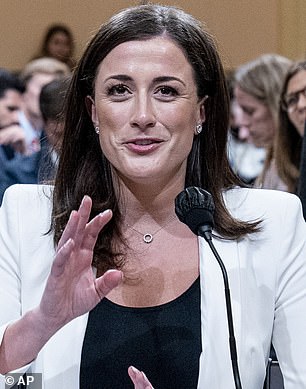 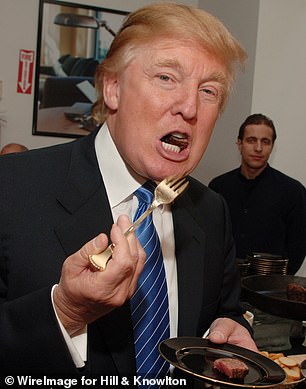 FOOD FIGHT: Former White House aide Cassidy Hutchinson (left) testified Tuesday that President Donald Trump (right) had tossed his lunch across the room upon hearing that Attorney General Bill Barr told the Associated Press that there was no fraud in the election 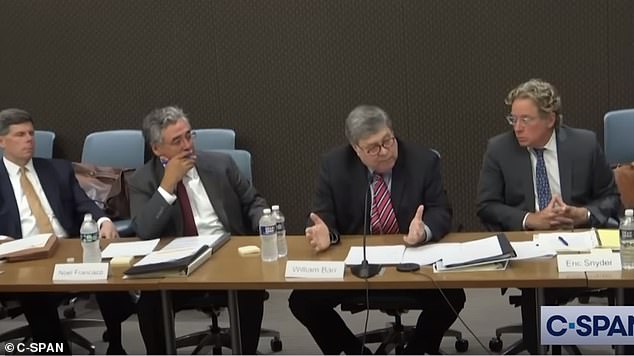 Former Attorney General Bill Barr told the Associated Press that the Department of Justice found no evidence of widespread fraud in the 2020 as former President Donald Trump falsely claimed. Trump reacted by tossing his lunch across the room, Hutchinson testified Tuesday

At Tuesday’s hearing, Hutchinson also recounted Trump’s rage when he was informed that he couldn’t go to the Capitol Building on January 6 after he whipped up supporters during the rally on the Ellipse.

Hutchinson recalled an impromptu meeting on January 6 after Trump returned to the White House after speaking at the Ellipse she had with former Deputy Chief of Staff Tony Ornato and Bobby Engel, the head of Trump’s security detail.

‘Did you hear what effing happened in the Beast?’ she said Engel asked her.

She replied that she hadn’t heard.

‘Tony proceeded to tell me that when the president got in the Beast he was under the impression from Mr. Meadows that the off-the-record movement to the Capitol was still possible and likely to happen, but that Bobby had more information,’ Hutchinson said.

Trump, Hutchinson said, thought they were going up to the Capitol – like he had told his crowd of supporters he would do.

This was in the hours before the attack.

‘When Bobby had relayed to him we’re not, we don’t have the assets to do it, it’s not secure, we’re going back to the West Wing, the president had a very strong, very angry response,’ Hutchinson continued.

She was told that Trump said something like: ‘I’m the effing president, take me up to the Capitol now!’

Engel, she said, reiterated that they were headed back to the White House.

‘The president reached up toward the front of the vehicle to grab at the steering wheel, Mr. Engel grabbed his arm and said, “Sir, you need to take your hand off the steering wheel, we’re going back to the West Wing, we’re not going to the Capitol,”‘ she said.

‘Mr. Trump then used his free hand to lunge toward Bobby Engel and when Mr. Ornato had recounted this story to me he motioned toward his clavicles,’ Hutchinson said, as a sign the president went for Engel’s throat.

GOP Rep. Liz Cheney then asked Hutchinson if Engel or Ornato ever changed their stories.

‘Neither Mr. Ornato or Mr. Engel told me ever that it was untrue,’ Hutchinson testified.

All Tuesday afternoon, Trump tried to distance himself from Hutchinson.

‘I hardly know who this person, Cassidy Hutchinson, is, other than I heard very negative things about her (a total phony and “leaker”), and when she requested to go with certain others of the team to Florida after my having served a full term in office, I personally turned her request down,’ Trump posted to his social media site Truth Social as 25-year-old Hutchinson’s testimony was ongoing.

‘Why did she want to go with us if she felt we were so terrible?’ Trump said.

He suggested that Hutchinson only played ball with the Democrat-led committee because he didn’t give her a job at Mar-a-Lago after he departed the White House in January 2021.

‘I understand that she was very upset and angry that I didn’t want her to go, or be a member of the team,’ Trump said. ‘She is bad news!’

In another post on Truth social, Trump also accused Hutchinson of changing her story.

‘She changed lawyers a couple of days ago, and with it, her story totally changed! SHOCKER???’ the ex-president alleged.

‘I NEVER SAID, “MIKE PENCE DESERVES IT (to be hung). Another made up statement by a third rate social climber!’ he posted. Trump had made a similar remark about Pence to ABC News’ Jonathan Karl that corroborated Hutchinson’s testimony 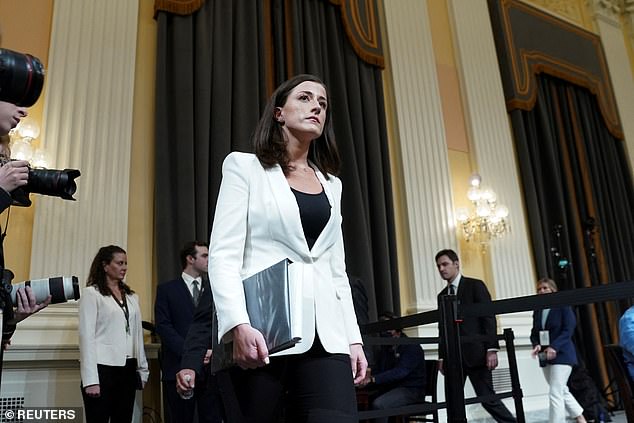 Cassidy Hutchinson, who was an aide to former White House Chief of Staff Mark Meadows during the administration of former President Donald Trump, returns after a short recess during Tuesday’s surprise January 6 hearing 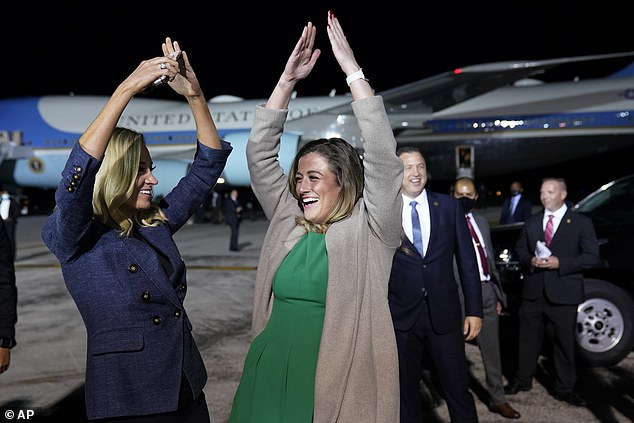 The former president fumed over the testimony Hutchinson delivered about him throwing temper tantrums.

‘Her Fake story that I tried to grab the steering wheel of the White House Limousine in order to steer it to the Capitol Building is “sick” and fraudulent, very much like the Unselect Committee itself – Wouldn’t even have been possible to do such a ridiculous thing,’ Trump wrote.

Later Tuesday, the January 6 committee tweeted out footage of Trump departing the Ellipse rally in a black SUV that purportedly shows his hands moving toward the driver.

‘Her story of me throwing food is also false…and why would SHE have to clean it up, I hardly knew who she was?’ the former president added.

After Hutchinson’s testimony concluded, Trump continued to go after her on Truth social.

‘Her body language is that of a total bull…. artist. Fantasy Land!’ he wrote. 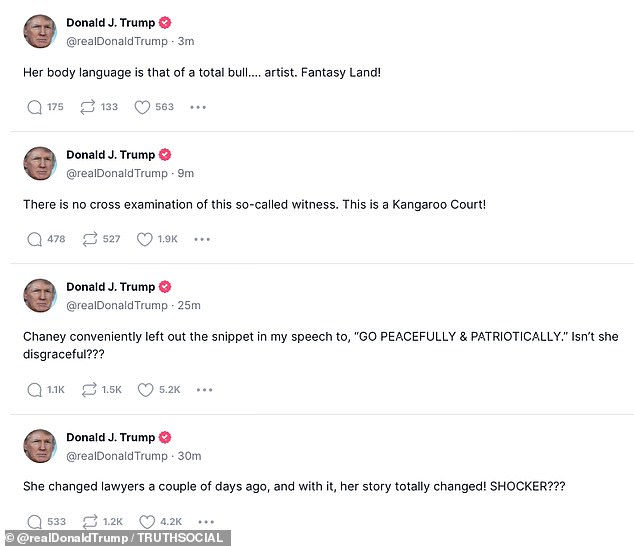 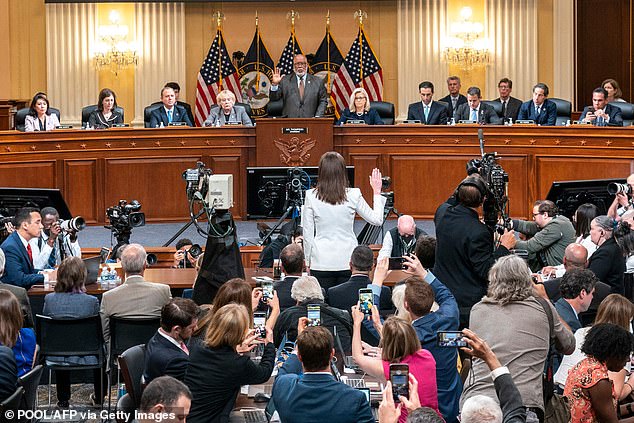 ‘I NEVER SAID, “MIKE PENCE DESERVES IT (to be hung). Another made up statement by a third rate social climber!’ he posted.

Trump had made a similar remark about Pence to ABC News’ Jonathan Karl that corroborated Hutchinson’s testimony.

‘There is no cross examination of this so-called witness. This is a Kangaroo Court!!’ Trump fumed.