Alan Jones turns off television and could resort to social media

Alan Jones was once too big to cancel. For three decades, the shock jock dominated Sydney’s media landscape, and was feared and courted by prime ministers and premiers who knew his words could swing votes.

But it would appear the controversial 80-year-old’s career has reached the end of the road, at least in the mainstream media. In the past 17 months, Jones has departed three media organisations, including Sky News Australia on Thursday. 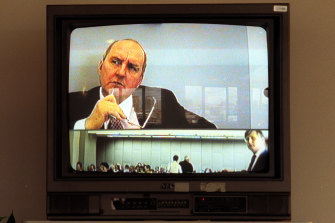 Pulled the plug: Alan Jones, seen in 1999 during the Cash for Comment inquiry, will no longer appear on Sky News Australia.Credit:Brendan Esposito

For years, Jones seemed to be everywhere. If you hopped into a Sydney cab in the morning, you would almost certainly hear Jones on the radio. Cab drivers were among his most zealous listeners, and would tune in to hear The Parrot’s electrifying rage-filled performance.

In May 2020, Jones left 2GB radio, now owned by the Nine Entertainment Company, which publishes this masthead. Jones would notch up a record-breaking 226 consecutive breakfast radio survey wins before he left. His retirement came after a period when some of his comments had become more outlandish and his attacks on certain individuals more appalling, drawing criticism from politicians, and alienating a number of advertisers.

Jones always delivered his show with scorching conviction in everything he said. Sometimes those statements would lead to an apology being issued to a politician or business leader. In the case of the wealthy Toowoomba-based Wagner family, an apology didn’t suffice. He was found to have defamed them, which resulted in a $3.7 million payout by Jones and two radio stations, 2GB and 4BC.

Among the many comments made by Jones that shocked and polarised people – more so than the 1999 cash-for-comments scandal – were a number of his remarks about female leaders, which saw former prime minister Malcolm Turnbull label Jones, an “appalling misogynist”.

“Given his longevity and success, I guess no one wants to see anyone who’s had a great career go out the way he’s going out.”

Jones was a fierce critic of Labor prime minister Julia Gillard, stating she should have been “put into a chaff bag and thrown into the sea”. He also gave a speech at a conservative function where he suggested her father died of shame because every time she stood for Parliament, she told lies.

He advised Prime Minister Scott Morrison to “shove a sock” down the throat of New Zealand Prime Minister Jacinda Ardern because of her views on climate change. Morrison said Jones had got “way out of line”.

Jones also had a fiery exchange on air with Sydney Opera House chief executive Louise Herron after her opposition to parts of a plan to project The Everest barrier draw on the Opera House sails. “Who the hell do you think … who do you think you are?” Jones said to Herron during the radio interview. He called for her to be sacked. Later he would apologise, as he did for his comments on Ardern.

Jones knew his success brought with it a responsibility. He had built up enormous capital over the decades, and it was for that reason he was hired as a columnist after leaving 2GB by The Daily Telegraph. He would also sign a contract to present four shows a week on Sky News.

In both forums, Jones would portray himself, as he always has, as a mouthpiece for ordinary Australians and a champion of their concerns – even though he’s a multi-millionaire, dapper dresser, who lives in the Bennelong Apartments on Sydney’s waterfront. The apartments have one of the best views in the city.

In July, the Telegraph dumped Jones as a columnist, after its editor Ben English announced that Jones no longer resonated with readers. And on Thursday, Jones departed Sky News, claiming his contract had not been renewed after he had lost his Monday to Thursday 8pm slot amid lower ratings.

Jones had been outspoken on Sky against the pandemic-led lockdowns and also COVID-19 vaccinations. A number of his comments were broadcast on Sky’s YouTube channel, which led to YouTube banning the Sky channel for a week for breaching its misinformation guidelines. On Sky, Jones also called NSW’s Chief Health Officer Kerry Chant a village idiot.

Radio broadcaster Ray Hadley, who has worked with Jones, was a fierce critic of Jones for his commentary around the pandemic. “I think the low point came this year with his stand against COVID,” says Hadley.

There is speculation in media circles that Jones may yet find his voice again on social media, via YouTube or perhaps a podcast. He is already posting columns on Facebook, where he has a loyal following.

Hadley says it’s disappointing how things have ended for Jones. “Given his longevity and success, I guess no one wants to see anyone who’s had a great career go out the way he’s going out.”

Perhaps Jones thought he was indispensable, which in the past year and half he has learned he is not.

Alan, JONES, OFF, televisio, turns
You may also like: