Follow
Home » World News » All visitors to WA from NSW, Victoria and ACT will need to be double-jabbed

All visitors to WA from NSW, Victoria and ACT will need to be double-jabbed

Travellers to Western Australia from Victoria, New South Wales and the Australian Capital Territory will need to be fully vaccinated against COVID-19, with other states likely to follow suit, the WA government announced over the weekend.

The new requirement that starts on November 5 does not apply to jurisdictions classified by WA as very low risk: Queensland, Northern Territory, South Australia and Tasmania. But that will all change once borders come down and other states start allowing Victoria, NSW and the ACT travellers to enter. 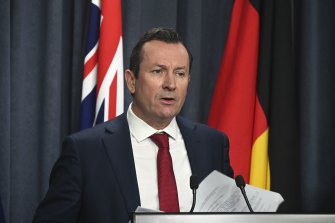 “Queensland is dropping its borders shortly to New South Wales and Victoria, so are South Australia and Tasmania. We expect that they’ll get community spread of the virus probably before Christmas,” Mr McGowan said on Sunday.

“So that will mean that we can put in place the requirement for double dose vaccination once they get community spread of the virus, based upon health advice.”

He quickly corrected himself to say that he hadn’t received such health or legal advice as yet, but once there was community spread “that will provide that opportunity”.

He also noted the threat to WA of people border jumping to get overseas and back as Australia was about to open its international border “without any requirement for quarantine” on Monday.

“I just want us to get through this period and get to very high levels of vaccination before such time as we run the risk of people coming from New South Wales, Victoria or indeed overseas, who would spread the virus here,” he said.

As of Monday, West Australians will be able to walk in, without an appointment, to a state-run clinic and get a vaccine booster of Pfizer, as long as it has been six months since their second dose.

In addition to receiving two vaccinations, visitors from Victoria and NSW, that are classified as extreme risk, will still have to stay in hotel quarantine for 14 days.

Arrivals from the ACT can self-quarantine at a suitable place as the territory is regarded as medium risk.

The need for approval to enter WA from Victoria, NSW and the ACT is unchanged.

Mr McGowan said the Delta variant had increased transmissibility and been central to outbreaks in NSW, Victoria and the ACT.

“These travel conditions will better protect WA and can be implemented under WA’s controlled border arrangements,” Mr McGowan said on Saturday.

“As we get our vaccination rate up, we need to remain cautious and vigilant, and take every precaution”.

Health Minister Roger Cook said the new requirement was based on health advice.

“With the vaccines readily available for people right across the country, it means people have had sufficient time and opportunity to be fully vaccinated before they travel,” Mr Cook said.

Travellers under 12 years of age or with a recognised medical condition are exempt.