America plummets down list of countries with the most ‘soft power’: Researchers say Trump has damaged the USA’s ‘international brand’ – while Germany tops the ranking and Britain comes in third

The USA has lost the top spot in a global ranking of ‘soft power’ after Trump’s bungled Covid response, a fraught election and mass protests saw perceptions of the country plummet.

Germany now sits at the top of the league table, second only to Japan with the UK in third. China has dropped out of the top five also due to its handling of Covid.

Meanwhile New Zealand has shot up the ranking largely off the back of its coronavirus strategy with other countries who handled the pandemic will also performing strongly – including Australia, South Korea, Canada and Norway.

Germany has come out top in a global ranking of ‘soft power’ which looks at how countries are perceived and how much influence they have, with the USA pushed down to sixth

Professor Joseph Nye, former head of Harvard’s Kennedy School of Government, said: ‘Polls in 2020 showed a serious decline in American soft power around the world. Covid not only killed Americans; it damaged our reputation for competence.’

The ranking was put together by Brand Finance, a consultancy that typically assesses the value of company brands around the world.

Each person was given a sample of the 105 countries from the full list, and asked which ones they were familiar with.

For countries people were familiar with, they were then asked to give their opinions on how those countries fared in business and trade, governance, international relations, culture and heritage, media and communication, education and science, and people and values.

They were also asked to rank how influential the countries were, give a view on their reputations overseas, and rank how well they hand handled Covid.

Scores in each category were then balanced out to create an overall score, which determined the ranking.

Plunging down the rankings in 2021 was the US – knocked from its top spot the year previously and down into sixth place, below Switzerland and Canada.

The fall was largely due to the country’s Covid response which was ranked the worst of any nation in the survey, behind the likes of Turkmenistan, Venezuela and the Democratic Republic of Congo.

Researchers credited Trump’s dismissal of the seriousness and severity of the outbreak, coupled with high infection and death rates as being behind the ranking.

However, the study showed it is still the most-recognised country with the largest diplomatic clout, the most influential arts sector, and whose affairs are most-closely followed by other countries – leaving it high in the table overall.

Meanwhile New Zealand, a country which ranked 22nd in the 2020 table, found itself sitting in 16th place this time around as the most-improved country.

The survey found the general public ranked its Covid response as the world’s best and admired leader Jacinda Ardern, whose handling of the pandemic saw her party win a landslide election victory in 2020 which she was previously predicted to lose.

People also scored the country highly as a place they’d like to visit and whose citizens enjoy a good lifestyle, its geographical remoteness meant it scored low for diplomatic influence – keeping it well out of the top 10.

It has also seen a rise in its international relations score as it took a bigger place on the world stage in 2020 – trading barbs with China over Covid and scoring high for trade, despite getting into an export war with Beijing.

At the top in 2021 was Germany, with a score that was almost unchanged from 2020 but due to the falling reputations of its competitors was enough to see it climb from second to first. 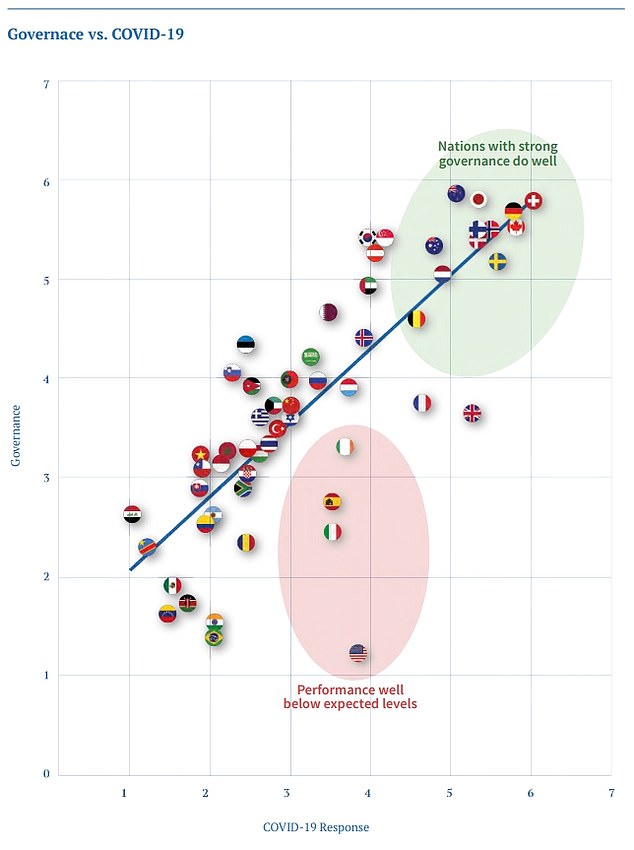 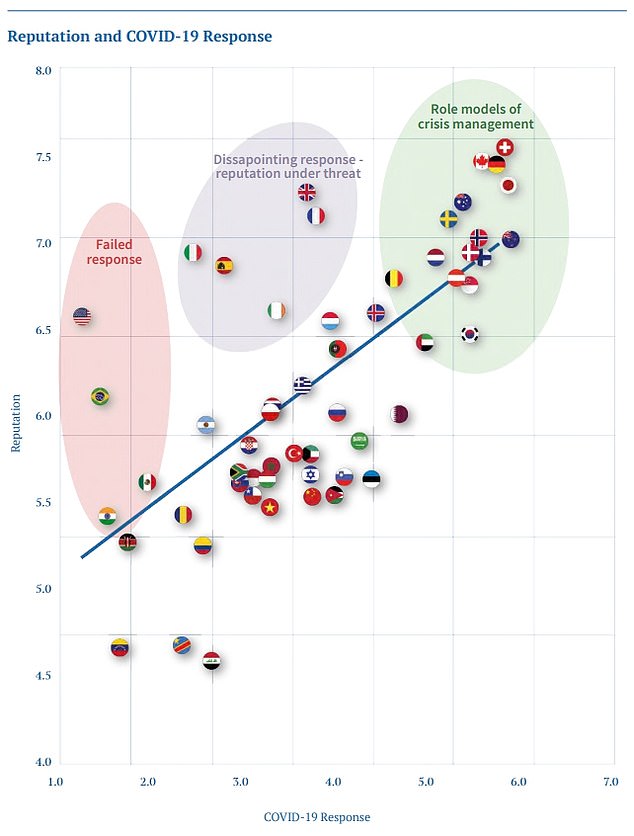 A graph showing how respondents ranked countries by their international standing against their Covid response, showing who lived up to their reputation and who damaged it

Analysts said that while Merkel’s reputation has taken a hammering at home in recent years, she remains the most-respected world leader internationally.

The country’s response to Covid – which has been among the best in hard-hit Europe – also earned praise, though the results do not take into account its vaccine drive which has fallen well behind other countries such as the UK.

Germany also performed consistently well in most categories in the survey and was especially popular with expert audiences which rated it top for Covid response, governance, international relations and trade.

Second-place Japan’s score was also little-changed on 2020 but damage caused to the UK by it’s Covid response saw the Asian nation rise to second place in the table.

Its success was largely driven by strong trade links and advances in technology and science, which saw people rank it in first place in these categories.

Meanwhile the UK held on to third place though its score slipped considerably on the strength of its Covid response which has left it with one of the highest death rates in the world.

But a strong performance across a broad range of other categories including media, education, culture and diplomatic influence saw the country perform well.

David Haigh, CEO of Brand Finance, said:Despite its economy being dwarfed by the rising dominance of the Eastern giants, China and Japan, the UK continues to be a force to be reckoned with in the soft power arena.

‘Throughout the nation’s long history, it has reaped the rewards of the English language, as the most widely spoken and written language in the world, and the popularity of the British Monarchy – with the Queen still head of state to 16 nations globally.

‘The soft power prowess the nation has banked will certainly stand the test of time, regardless of any short-term hurdles.’ 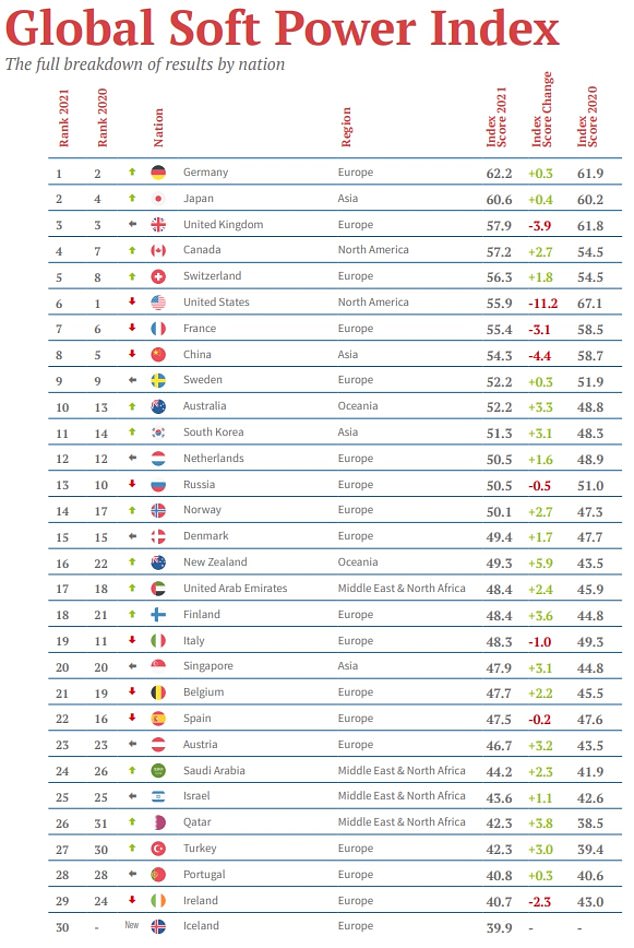 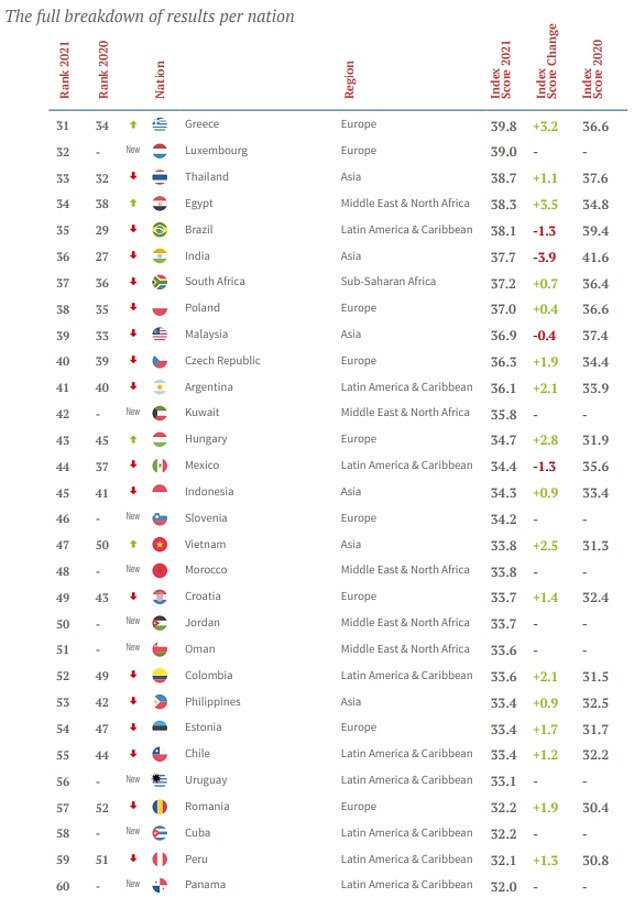 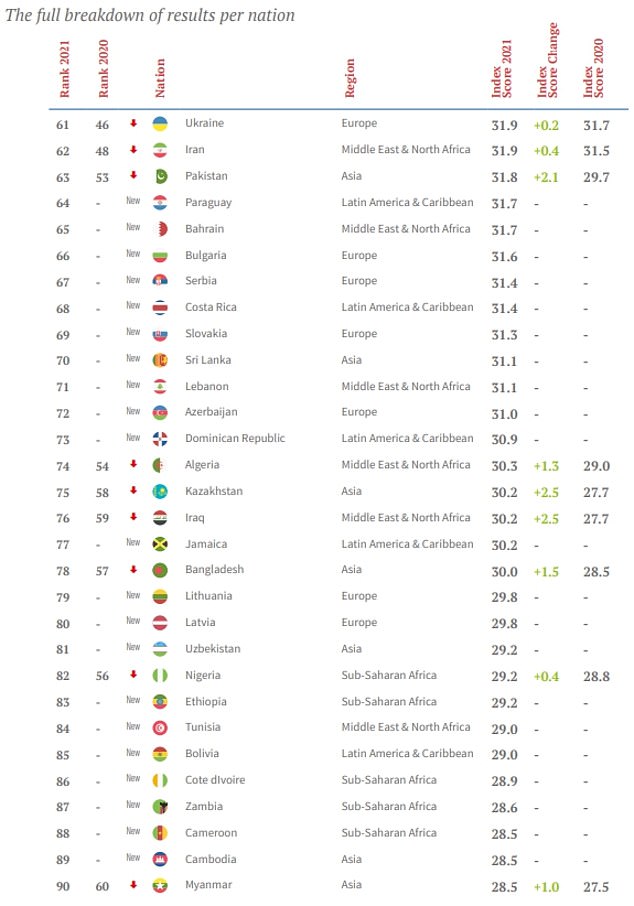 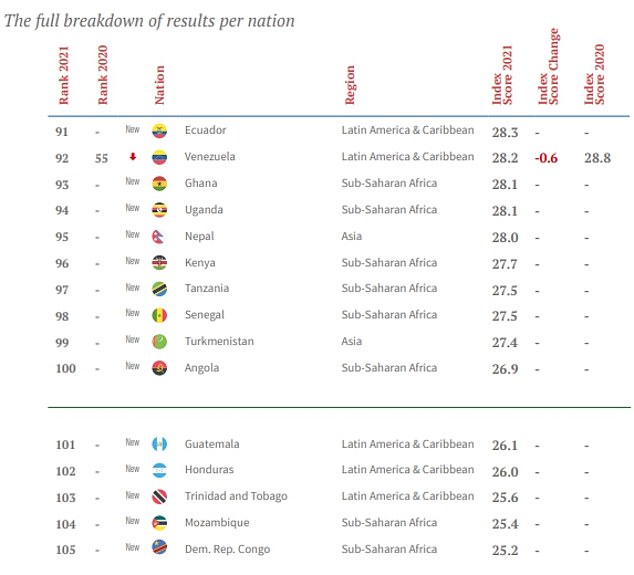