Washington: The Morrison government knew that French President Emmanuel Macron would be upset when it tore up a $90 billion submarine contract with a French defence contractor Naval Group.

So did Joe Biden, which is why the US President made a point of praising France’s commitment to the Indo-Pacific region at a press conference announcing he would share America’s prized nuclear-powered submarine secrets with Australia.

But it’s clear neither Morrison nor Biden grasped just how outraged France would feel by the submarine decision. Yes, they knew the French would moan and groan but what else would they do? 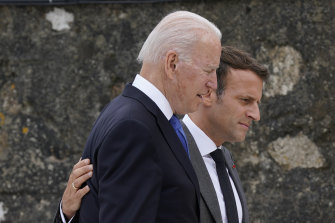 Now we know through Macron’s extraordinary decision to recall the French ambassadors to Australia and the US.

In a statement announcing the move, French Minister for Foreign Affairs Jean-Yves Le Drian made clear that France’s resentment extends far beyond annoyance at a loss of jobs and revenue from the submarines project. This goes to the heart of how France sees itself as a global player in the 21st century.

The US and Australia submarine pact, Le Drian said, constitutes “unacceptable behaviour between allies and partners – the consequences of which affect the very conception that we have of our alliances, our partnerships and the importance of the Indo-Pacific for Europe”. 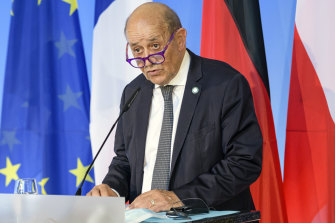 Macron could have taken the easy option by simply recalling the ambassador to Australia and leaving America out of it. After all, it was Australia that reneged on the deal. And compared to America, Australia is a far more distant and less important country to France.

But Macron decided to punch up, as well as down, by rebuking both countries.

The decision represents a stunning deterioration in US-French relations since Biden’s inauguration and a devastating blow to Biden’s efforts to repair the damage to America’s alliances during the Trump years.

No-one could have predicted that it would be under Biden that France would recall its US ambassador for the first time in its history. Chinese President Xi Jinping will be looking at the feud between close two western allies with pleasure and amazement.

At the G7 summit in June, Macron, like the other European leaders, expressed his delight that a US President who believes in multilateralism and tackling climate change was again in the White House.

“I think it’s great to have a US President part of the club and very willing to cooperate,” Macron said after his first in-person meeting with Biden.

But that sense of delight has now curdled into fury. Crucially, the submarines decision did not occur in isolation – the French were already annoyed by the Biden administration.

Macron was angered by Biden’s lack of consultation over the withdrawal from Afghanistan and its refusal to extend its withdrawal deadline.

Macron and other European leaders are also exasperated with the Biden’s refusal to lift the Trump administration’s ban, introduced in the early days of the COVID-19 pandemic, on Europeans entering the United States.

Despite the widespread availability of vaccinations, French travellers are still banned from entering the US – even if they are fully vaccinated.

The submarines decision tipped Macron over the edge and unleashed a deep-rooted strain of anti-Americanism in France’s national psyche.

As much as the two nations are longstanding allies, the French have long formulated their sense of identity in opposition to America’s. “To be French was not to be American,” historian Richard Kuisel wrote in 2013. “Americans were conformists, materialists, racists, violent, and vulgar. The French were individualists, idealists, tolerant, and civilised.” 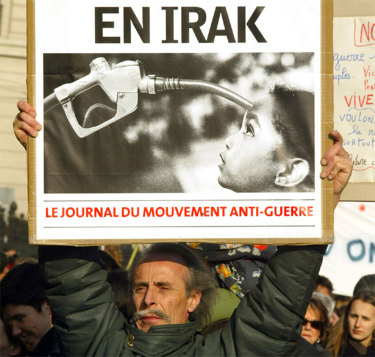 This is the lowest point in French-American relations since jacques Chirac opposed the Iraq war in 2003 and hundreds of thousands of French protestors took to the streets. Credit:Reuters

And there have been fractious moments in the past. Relations soured during the Bush years as President Jacques Chirac became a leading critic of the war in Iraq (leading some Americans to rename french fries as “freedom fries”). They went downhill again under Trump before, seemingly, soaring under Biden.

Earlier this year, a Pew Research poll found a stunning 74 per cent of French adults trusted Biden to do the right thing for world affairs – up from just 11 per cent under Trump. That number would surely be much lower today.

The rupturing of US-French relations comes at a terrible time for Biden, as he tries to rally democracies around the world to push back on China’s growing global influence.

Biden was counting on France, as one of Europe’s most populous and powerful nations, to play a key role in the struggle to contain China’s ambitions. That now looks far less assured.

Like other countries around the world, the French have grown increasingly alarmed by China’s “wolf warrior diplomacy” in recent years. Now they are also questioning America’s loyalty and trustworthiness.

In the long term, it may well be the US, rather than Australia, that suffers the most from France’s sense of betrayal over the submarine contract. That loss would be China’s gain in the geopolitical battle to dominate this century.

America's, Chinas, gain, is, loss
You may also like: