Follow
Home » World News » ‘And then Andrew Peacock arrived’: Tributes for the colt of Kooyong and a life lived to the full

‘And then Andrew Peacock arrived’: Tributes for the colt of Kooyong and a life lived to the full

It was a Saturday morning in the early ’90s and future Victorian premier Ted Baillieu was presenting to a hall of federal politicians collectively dressed in sweaters and jeans on the “most dour” topic of seat redistribution.

“And then Andrew Peacock arrived.”

The debonair ‘colt of Kooyong’ wore an immaculate suit with silk shirt and tie, Mr Baillieu recalled. He carried an umbrella and hat, and an overcoat was draped across his forearm. 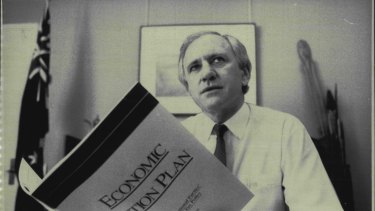 “Andrew abruptly spoke up and went as hard as he possibly could on some technical point, ” Mr Baillieu said. “I turned to my screen to reconcile what he was saying and I turned back around and he was gone. He had gone to the races.

“In this short, passionate, loud and furious contribution he’d got everyone’s attention, made his presence felt, got people thinking and then full stop – off to the races.” 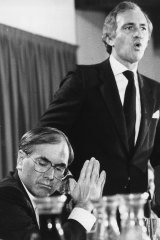 “Wherever he went, people were aware he was in the room,” Mr Baillieu said. “I think everyone would say he was great company.”

Friends, allies and past political foes have said this and more since his daughter Ann confirmed online the death of her “beautiful, loving, most caring, thoughtful, generous and brilliant father”.

Former prime minister John Howard, a famous adversary as the two men duelled for the leadership of the Liberal Party through the 1980s, paid tribute to Mr Peacock on Saturday as a “hugely significant figure” in Australian politics.

“It was well known Andrew and I had our differences, but we well and truly buried the hatchet many years ago,” Mr Howard said.

“I was very happy when he accepted my invitation to become Ambassador to the United States after I became prime minister. He carried out that role with great flair and distinction.” 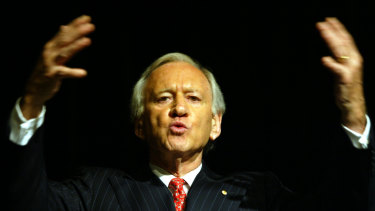 Andrew Peacock at a Brisbane leaders forum in 2003.Credit:afr

Mr Howard recalled a conversation in the early 1990s when then US president George Bush senior seemed invincible.

“Andrew said to me that he thought the then governor of Arkansas, Bill Clinton, would get the Democratic Party nomination and go on to win the presidency,” he said.

“Not many people thought that at the time, but the fact that is how it occurred indicated his understanding of the ebbs and flows of American politics.”

Mr Peacock served in the governments of John Gorton, William McMahon and Malcolm Fraser before becoming opposition leader from 1983-85 and from 1989-90. He lost federal elections to Labor leader Bob Hawke in both tenures.

“He was Australia’s most prominent and trusted international voice for almost 30 years,” Mr Kroger said. 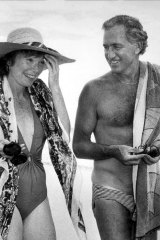 “He was a close friend of both Ted Kennedy and the Bush family – a confidante of prime ministers, presidents and premiers throughout the world. People would ring Andrew Peacock and he was trusted.”

Treasurer Josh Frydenberg, who inherited Mr Peacock’s federal seat of Kooyong, said his friend and supporter was authentic, tough and carried a dry sense of humour.

“He will be remembered fondly by those on both sides of the political aisle as he played his politics as he pursued life – with vigour, dignity and the utmost decency.”

“He was a very decent man, especially for a politician,” Hinch said. “He had friends on both sides of the house, which is hard to do. And believe it or not, he had principles.“

Former Victorian premier Jeff Kennett said he and Mr Peacock would regularly share the details of their private and public lives over their 40-year friendship. One such conversation, in which they used most-colourful language to denigrate then Liberal leader Mr Howard, was recorded by a man with a scanner and leaked. 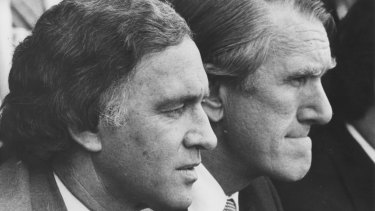 Mr Peacock was subsequently sacked from his shadow portfolios. “I can’t ever remember him living a grudge,” Mr Kennett said.

“I think one of the symbols of Andrew, in my opinion, was that he [believed in] experiencing life to the full. You do your best and you win and you lose.

“Even when he lost the second election, he said to me on the night when we were watching the votes come in, ‘Oh well, I’m not sure if I ever really wanted the job’.

“It was his profession but it wasn’t the be all and end all in his life. The most important thing is to enjoy it and learn from mistakes, move on and keep living as long as you can.”

And, Andrew, arriv, peacock, then
You may also like: