Basketball star Andrew Bogut’s quest to build a forever home in Beaumaris has ended in a slam dunk for the basketball star and wife Jessica in their dispute with Bayside Council.

After accusing Bayside of stonewalling on his development application to build a $4.7 million family home on two blocks on Point Road, Bogut took the council to Victoria’s Civil and Administrative Tribunal after planning officers approved the proposal but councillors voted it down.

Now VCAT has approved the proposal, with conditions.

“I would never stand for council – I would rather hit my head against a brick wall,” Bogut told CBD. He praised council staff but took aim at Bayside’s elected councillors.

“I have a long memory and will do all in my power to campaign against them. Council needs to be reformed in this country.” 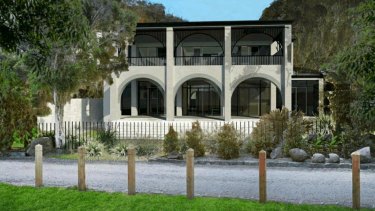 The outspoken Bogut, the first Australian to be the US NBA’s first overall pick, said many people had contacted him to complain about poor council decision-making.

“Their powers need to be taken away from them because of what they are doing on a daily basis.”

“While disappointed, the council is pleased to see that VCAT stipulated conditions that better integrate the property with its treasured surroundings,” he said.

Such as rejecting Bogut’s proposed white bricks in favour of grey bricks.

Evans says Bayside spent $84,000 on its VCAT case. Bogut spent in the region of $150,000. “I would rather have written a cheque to build a children’s park in the area,” the basketballer said.

After crowing about its recent court victory to build the Dendy Street Beach Pavilion, the council neglected to issue a press release on this legal defeat. But council did issue a release instead on the need to repaint the brand new toilet on the Thomas Street Reserve.

“Council has accepted the decision of VCAT and is not currently proposing to appeal,” a spokeswoman told CBD.

Readers will recall how one local resident took objections into their own hands by scrawling a phallus on the house, an action that drew the ire of Evans, who told us graffiti was “never acceptable”.

Despite building shortages, Bogut hoped construction will begin in the second quarter of next year on the four-bedroom mansion with a swimming pool, gym, sauna, massage room, roof terrace and, of course, half-size basketball court.

We took a voyage to the very bottom of the podcasting charts in an attempt to find out just how (un)popular the podcast is. “Empty buzz words and cliches … Pass,” wrote the only reviewer.

Grynberg kicks off proceedings by promising the conversation will “answer the important questions often not asked in the media.” How very dare you Sarah!

Grynberg’s first question was hardly witness for the prosecution on that point: “Josh you have arguably one of the toughest jobs in Australia right now. But let’s start at the beginning. How were the younger years?”

The Treasurer responded: “Yeah g’day Sarah. Yeah I have got a challenging job but I ’spose no more challenging than our frontline health workers right now or our defence force personnel who are deployed overseas or so many other people who work pretty tough day or night jobs, but it’s a privilege to serve in this portfolio…”

How did this shot at podcasting stardom come about and is the Treasurer making any coin from this arrangement?

Normally podcasts are created as part of a revenue sharing arrangement with ad revenues split between production companies and on-air talent.

The podcast is produced by LiSTNR, part of Southern Cross Austereo empire which includes Triple M, Fox FM and 2Day Fm. Sources say it was SCA who approached Frydenberg, not (as we and everyone else would assume) the other way around.

“The Treasurer, Josh Frydenberg does not have a commercial agreement with SCA,” a spokeswoman said. “SCA will bear all costs associated with creating the podcast and will retain all revenue from advertising in the podcast. Mr Frydenberg will not receive a share of any advertising revenue nor any other payment whatever.”

Listnr also hosts the Jessica Rowe Big Talk Show, which saw the former Studio 10 presenter cancelled on Twitter after having the temerity to chinwag with Senator Pauline Hanson in a since deleted interview.

Zero chance of any controversy erupting over the Josh Frydenberg interviews which promise to be a triumph of visibility over substance.

Shock horror up north following Gladys Berejiklian’s turbo-abrupt resignation from the state’s top job on Friday on the back of bombshell news of an ICAC investigation.

Proving political idolatry and fanaticism doesn’t stop at the Victorian border, the Premier State’s own political uber-fans – BerejikliStans or Gladys Groupies? – have jumped online in the outgoing MP’s defence.

By Sunday afternoon, a Change.org petition calling for her reinstatement titled “Don’t let Gladys Go – Now is not the time” had soared to over 51,000 signatures. Emotive message calling the outgoing leader “an anchor and an inspiration … has our vote, our confidence and our loyalty” earned support from Sydneysiders in high places.

Andrew, Bogut, counci, dunks, slam
You may also like: