‘I’ll get out of the car and slap you!’ Moment angry motorist threatens to hit female driver in fuel queue row ‘after he tried to cut in front of her at petrol station’

This is the shocking moment an angry motorist was caught on camera threatening to hit a female driver in a fuel queue row.

Beth Ashton was in a two-hour long queue at a petrol station today, believed to be in London, when she claims that a male driver tried to skip ahead of her by ‘ramming’ his car.

However, when she objected she said that he threw a cup of coffee at her car and went on to verbally abuse her, calling her slew of insults. 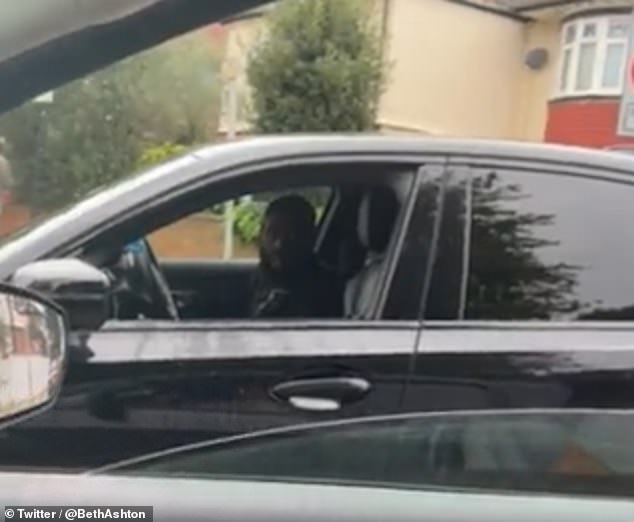 This is the shocking moment an angry motorist (pictured) was caught on camera threatening to hit a female driver in a fuel queue row at a petrol station, believed to be in London

The passenger in her car caught the moment on video as he threatened her with physical violence, saying: ‘I’ll get out of the car and slap you!’

In the video, the man is seen arguing with her after the altercation, saying that the traffic warden should be giving him directions.

She replies, saying: ‘Well listen to her then.’

When she warns him that he is being recorded, he continues the torrent of abuse, saying: ‘So what? I’ll slap that phone right out of her hand…. 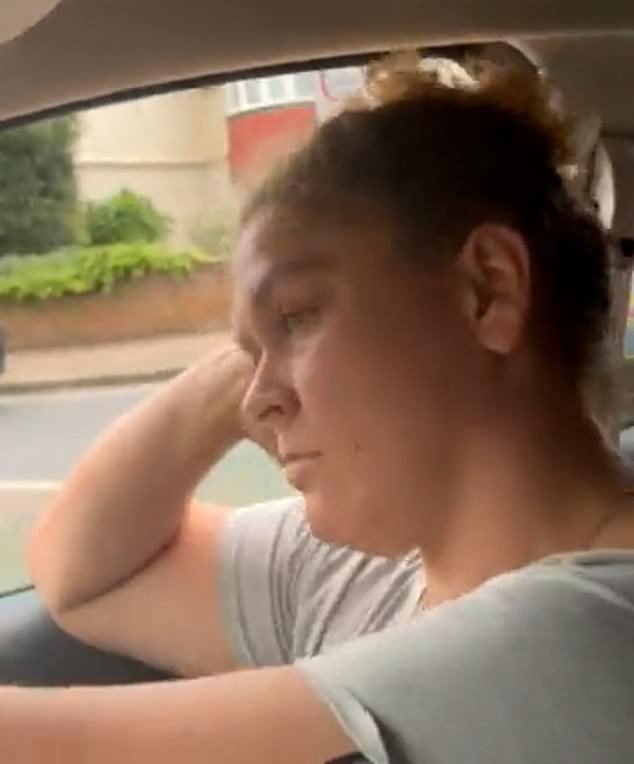 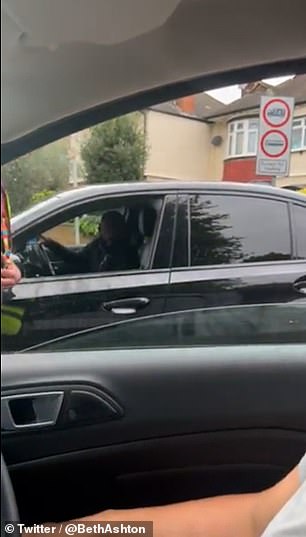 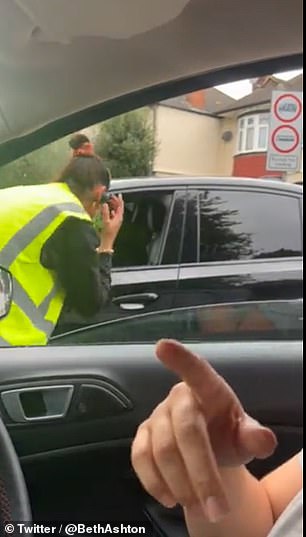 She said that he threw a cup of coffee at her car and went on to verbally abuse her, calling her slew of insults and saying he will ‘slap her’ – despite being warned he was on video (right)

Beth uploaded the video to Twitter on Friday afternoon, writing: ‘U ok mate? Tried to cut in at the petrol station ahead of a 2 hour queue by ramming.

‘Threw a coffee out of the window (at a closed window) then this.’

It comes as Government ministers admitted lengthy queues at petrol stations are likely to continue for at least another week.

Policing Minister Kit Malthouse said this morning that the fuel situation should be resolved in a ‘week or so’.

Mr Malthouse said there needs to be an ‘improvement’ in the situation in the coming days and that Boris Johnson stands ready to review matters if there is any deterioration. 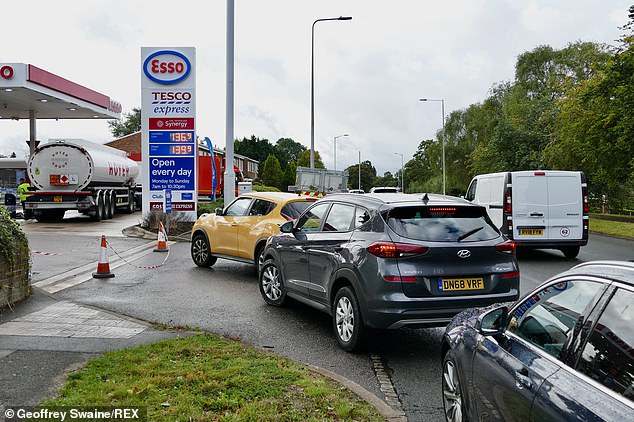 READING, BERKSHIRE – A Hoyer fuel delivery refills the pumps at an Esso in Emmer Green, Reading as motorists continue to queue on Friday 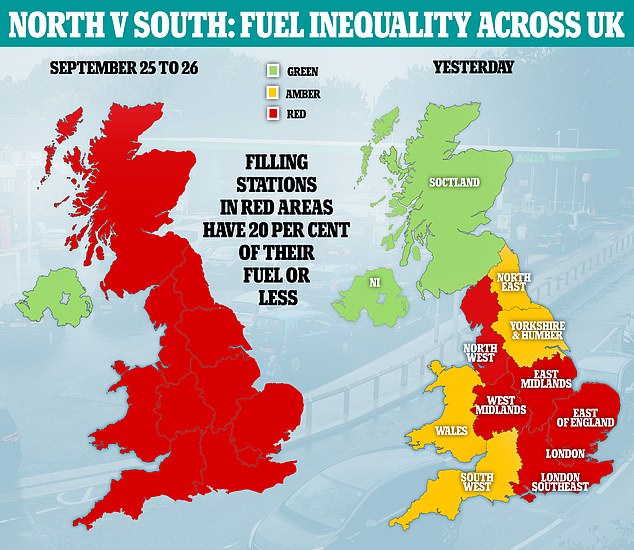 However, pictures showed that approximately 40 reserve petrol tankers continued to sit in storage in Fenstanton, Cambridgeshire this morning despite the ongoing fuel crisis.

Pictures taken today in Kent, Reading and London showed panic buying continuing, while bus routes were subject to delays in the early hours of the morning as huge queues continued to form at forecourts across much of the country.

Average fuel levels at UK petrol stations yesterday were at 20 per cent for the third day running – less than half the normal figure of 43 per cent – but Whitehall analysis showed a drastically varying picture by region.

Mr Malthouse’s downbeat assessment contrasted sharply with comments by other ministers in recent days that the situation would swiftly return to normal as drivers resumed their usual buying patterns.

It follows a warning by the Petrol Retailers Association that filling stations were running out of fuel faster than they could be resupplied, with one in four forecourts having run dry. 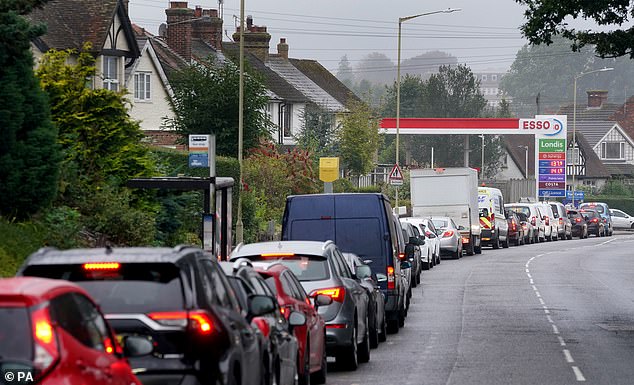 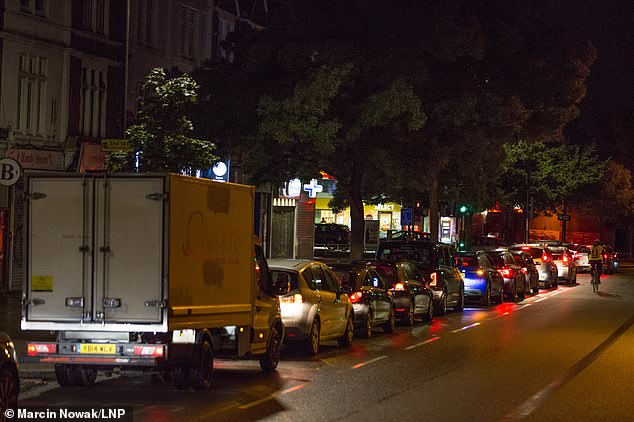 CLAPHAM, SOUTH LONDON – Motorists line the streets in front of a petrol station in the early hours of Friday morning as the eighth day of fuel chaos continued 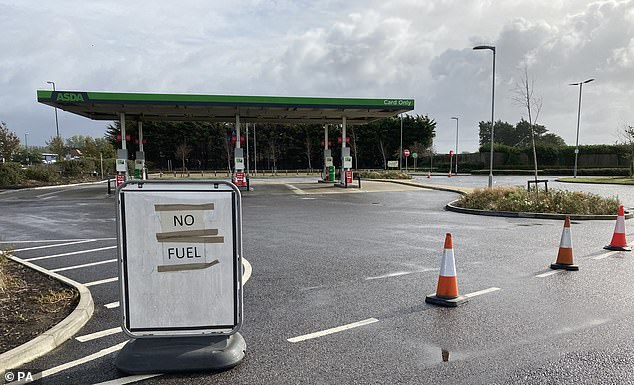 FERRING, WEST SUSSEX – An Asda petrol station is closed off to the public over fuel shortages

angry, hi, motorist, threatens, to
You may also like: