Angry tigress attacks and kills a leopard in India

Now THAT’S a cat fight! Angry tigress attacks and kills a leopard before dragging its rival’s body off in India

This is the extraordinary moment a tigress attacked and killed a leopard in India in what is believed to have been a rare territorial dispute.

The gruesome scene was captured in the Sariska Tiger Reserve in Rajasthan, near Jaipur in northern India, by business owners Yashvardhan Singh Shekhawat, 24, and his cousin Abhimanyu Singh Rajvi, 30.

The pair said the tigress had leaped around 10ft into a tree in order to grab a leopard which had been hiding in the branches, before dragging it to the ground and breaking its neck.

Shekhawat and his cousin then snapped the huntress crossing the road with her kill. Initially the pair thought the tiger was hunting, but park rangers later found the leopard’s body uneaten.

Tigers are sometimes known to kill other predators such as leopards and crocodiles if they feel threatened. 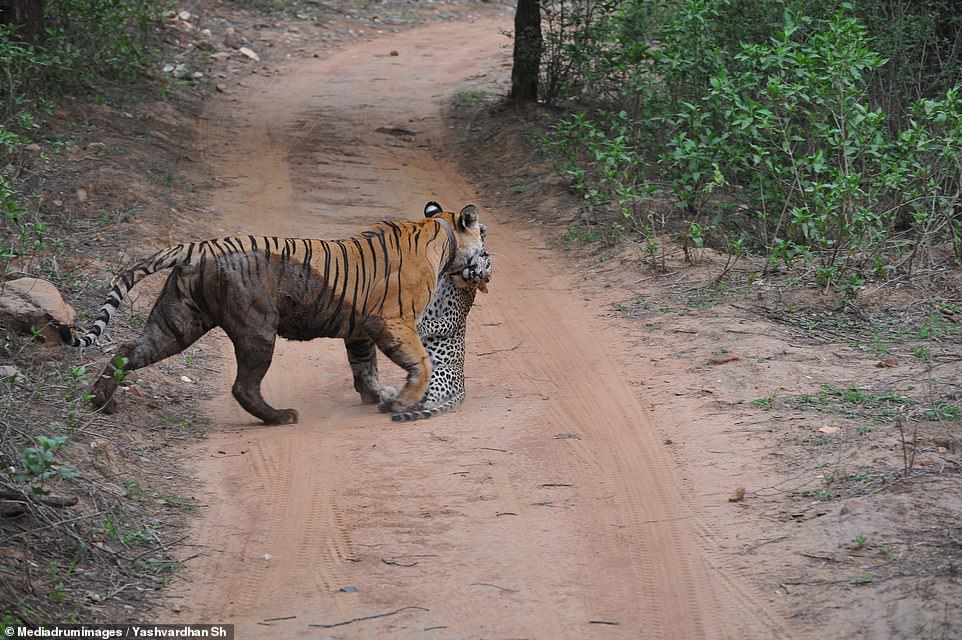 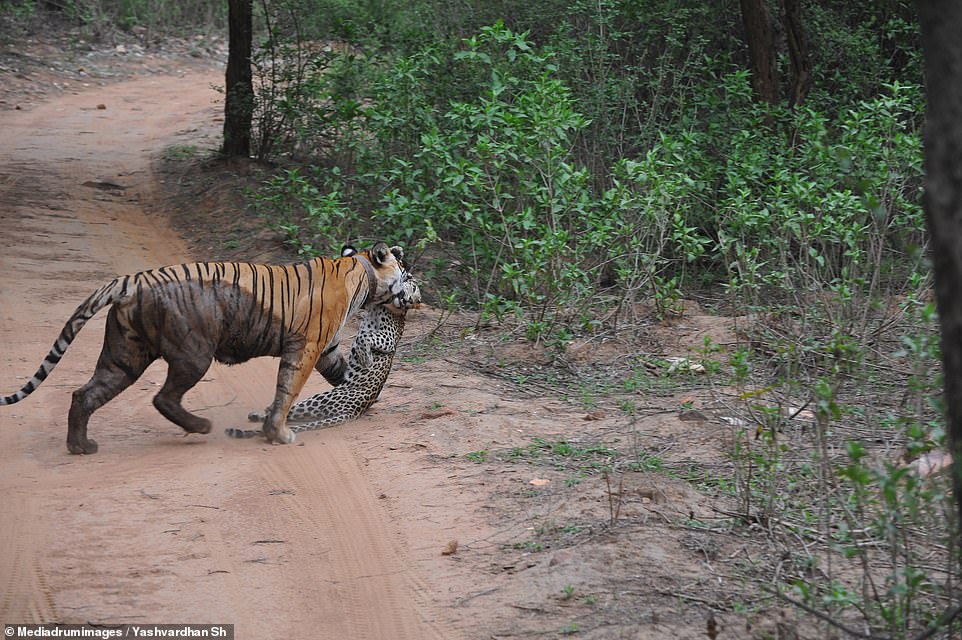 The brawl took place at the Sariska Tiger Reserve in Rajasthan, with witness Yashvardhan Singh Shekhawat saying the tiger leaped 10ft into a tree to drag its rival to the ground

Yashvardhan said: ‘We woke up around 5:30am and entered the jungle at the Sariska Tiger Reserve.

‘We knew a predator was close because other animals like monkeys, peacocks and deer were all making sounds to alert each other to the threat.

‘We were driving slowly, trying to track the predator and figure out where the sounds were coming from.

‘To our right there was a small hill. Suddenly we heard a roar from behind us and we saw the tigress was trying to climb up a tree. We also spotted a leopard on top of another tree close by.

‘The tigress made an eight to ten feet leap onto the tree and caught hold of the leopard. There was a brief brawl only lasting a few seconds in the forest in which the tiger won.

‘It doesn’t make sense for a leopard to fight with a tiger and tigers don’t bother with leopards usually.

‘I have encountered lots of tigers over the years. I’ve seen tigers fighting and tigers mating, but I hadn’t ever seen anything like this.

‘Very few people in the wildlife world ever have an opportunity to see something like this. It was out of this world. There are no words to explain how amazing the experience was.

‘I don’t think anyone else would have believed what we had seen if we didn’t capture it on film.’ 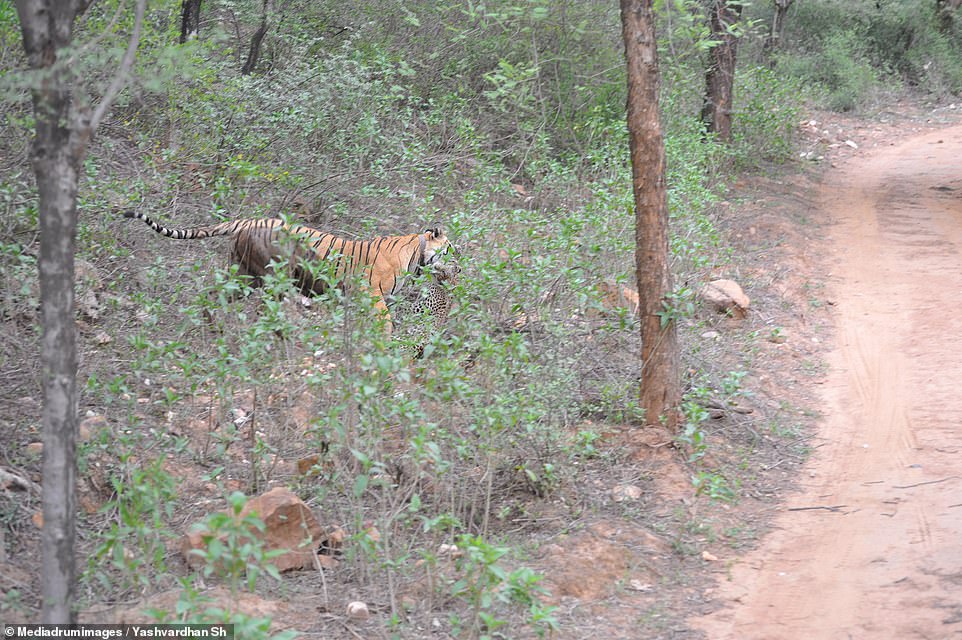 Once the leopard had fallen out of the tree, a fight broke out between the two cats which ended when the tiger – roughly three times the leopard’s size – broke its neck 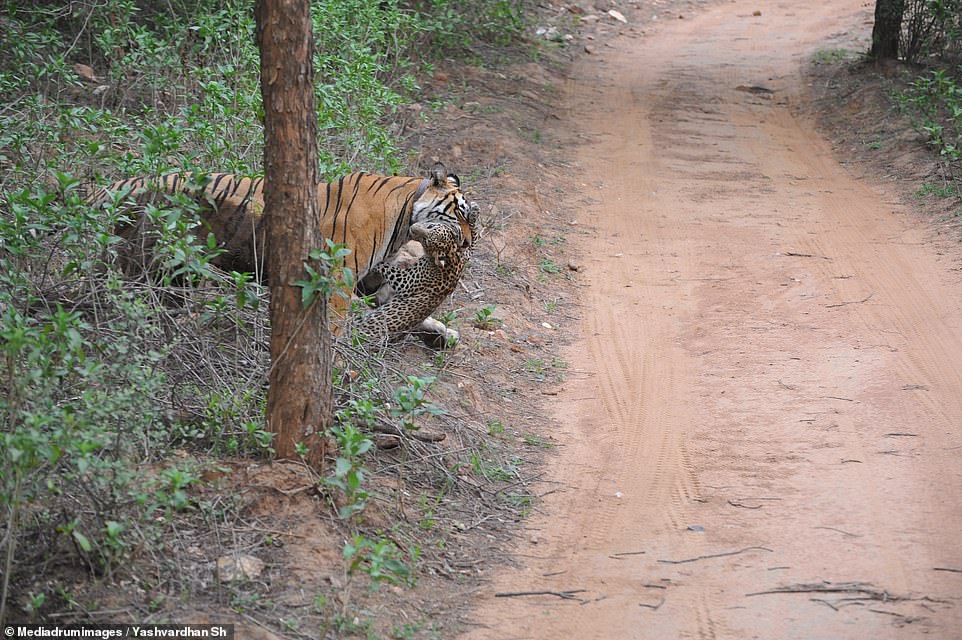 Tigers are not known to hunt leopards for food, and park rangers say they later found the cat’s body uneaten. However, tigers are known to kill other predators if they feel threatened

'Tigress, And, angry, attacks, kill
You may also like: