Students who are demonstrating to demand the resignation of lecturer Kathleen Stock have defended their decision to remain mostly anonymous.

The philosophy professor at the University of Sussex has been subjected to a student-led campaign over her views on trans rights – with further action planned for this afternoon.

It is believed the campaign is being led by a group of 15 students, who have previously been seen posing in balaclavas and holding up a sign reading ‘Stock out’.

The threat she faces from the demonstrations have even led to her being advised to install CCTV at her home and to hire security to protect her on the university’s campus.

Until now, the students involved in the campaign have chosen to remain anonymous, but speaking to The Times, 23-year-old Rio Jacques, involved in the demonstrations, defended other students’ rights to hide their identities.

Speaking to the paper he said: ‘We try to keep as much anonymity as possible. It’s plausible deniability as well.

‘It’s cloak and dagger, but that’s not the way we want it. The masks, it’s not meant to be threatening. It’s just for the protection of people that want to be vocal.

‘No one wants to lose their place at university, but we don’t want to sacrifice our right to defend ourselves with our words.’

The groups leading the calls for Stock’s resignation are known as Reclaim Sussex and Anti Terf Sussex, of which Jacques – who is transgender – is involved in both.

He said that part of his motivation for joining the campaign was as a result of his parents’ reaction to announcing he wanted to transition and said their negative views were informed by online stories by Stock. 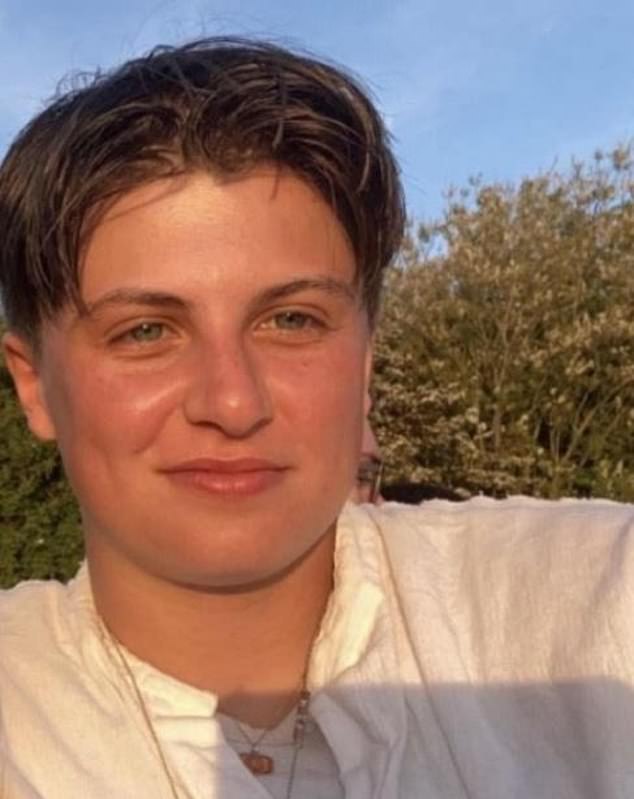 Until now, the students involved in the campaign have chosen to remain anonymous, but 23-year-old Rio Jacques (pictured), involved in the demonstrations, defended other students’ rights to hide their identities

And although he acknowledged that the demonstrations must be hard on Stock, but claimed that Stock was adding to the negative impact on the mental health of the trans community.

It comes after the BBC was forced to make a correction live on air after it allowed a University of Sussex student union officer to falsely accuse Stock of supporting anti-transgender statements.

On Wednesday’s broadcast of BBC Politics Live presenter Jo Coburn interviewed Amelia Jones, the union’s elected transgender and non-binary representative about the feminist academic at the centre of a free speech at universities row.

During the programme, Ms Jones made a string of comments about Professor Stock, 48, including allegations that students had boycotted her classes before and stating she publicly supported a declaration to ‘eliminate trans people in law’.

The student union rep added there was ‘strong feeling within the community’ that transgender students at the University were ‘unsafe’ and felt ‘intellectually threatened’ by Professor Stock. 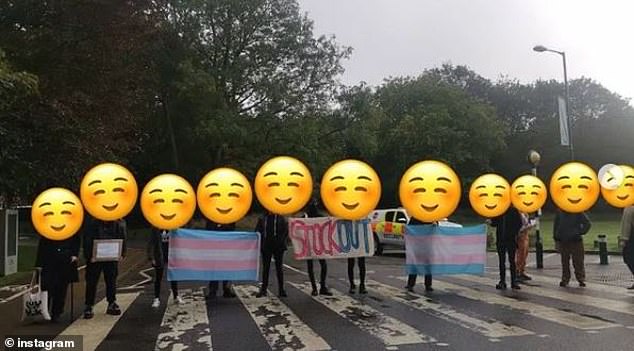 It is believed the campaign is being led by a group of 15 students, who have previously been seen posing in balaclavas and holding up a sign reading ‘Stock out’. Pictured: Members of Anti Terf Sussex hide their faces in a picture of their protest on social media

It comes as public demonstrations by University of Sussex students are planned for this afternoon – after the gender expert was branded a ‘transphobe’ and posters were put up around campus demanding her resignation last week.

Prof Stock, a trustee with activist group LGB Alliance – who have previously been accused of ‘anti-trans’ policies – has been advised by police not to visit campus, and teach her lectures online due to concerns for her safety.

She has faced a torrent of online abuse, and been branded a ‘terf’ for writing that she disgreed with the ‘transwomen are women’ mantra, and calling for female safe spaces.

The term ‘terf’, which stands for Trans Exclusionary Radical Feminist, was levelled at JK Rowling after she disagreed with an online article describing ‘people who menstruate’. 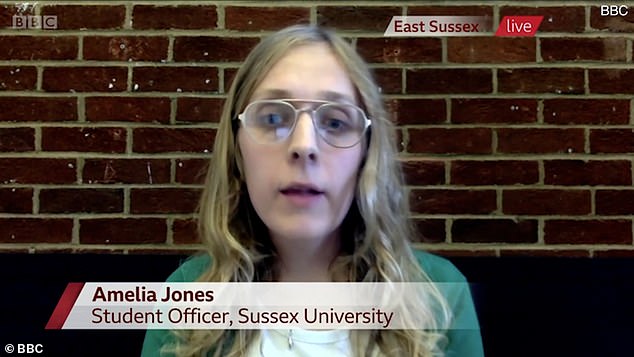 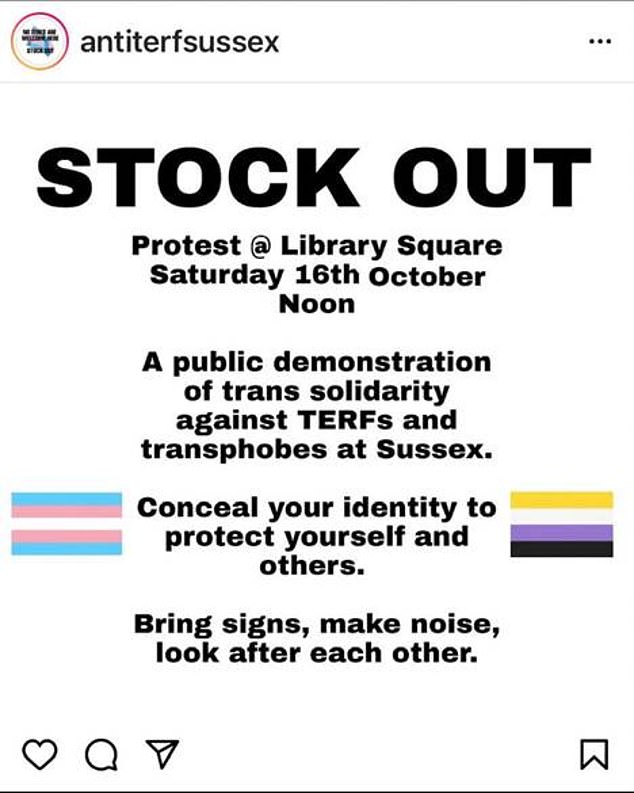 Ms Jones told Politics Live on Wednesday: ‘Professor Stock at Sussex, who has signed Women’s declaration of sex-based rights which wants to eliminate trans people in law and wants to stop teaching of trans identities in British schools, I think when a professor like that is employed by a university the trans students feel that if someone holds those views there they do not feel safe with a professor holding those views.

‘Feminists argued that universities have a duty to protect students and workers from sexual harrassment and other forms of discrimination in the classroom.’

She reiterated trans students feel ‘intellectually threatened’ by Prof Stock, who is a trustee of LGB Alliance and suggested students have previously revolted against her.

‘People have changed courses due to her, people have not attended her modules due to the strong disagreement with her views,’ Ms Jones said on the programme.

But an official correction from the BBC was broadcast live on Thursday’s edition of the programme.

That statement read: ‘We discussed the issue of freedom of speech on University campuses. We talked about the case of Kathleen Stock, an academic at the University of Sussex who is accused of transphobia.

‘Yesterday, we spoke to a student union officer at the University who said Prof Stock had signed a declaration that wanted to eliminate trans people in law.

‘Prof Stock has contacted us to point out that she supports the protection of gender reassignment, saying the text of the declaration she signed does not amount to the claim that trans people should be eliminated in law

‘She said my arguments are about the precise legal form protections all trans people should take and how they interact with protections with other groups.

‘I do not want to stop all teaching of trans rights or trans identities in British schools and I have never said this.’

In April, Amelia Jones was elected as the University of Sussex’s trans and non-binary representative.

In her manifesto, Ms Jones accused the University’s ‘Trans Equality Policy’ as being ‘full of empty words’ and promised to make curriculums on the teaching of trans issues more representative.

She also claimed she would ensure ‘Sussex stays a Stonewall diversity champion.’

Signs put up last week in the pedestrian tunnel connecting Falmer train station to the university’s campus under the A27 said Prof Stock ‘makes trans students unsafe’ and ‘we’re not paying £9,250 a year for transphobia’.

Prof Stock has since been advised to teach her students online over fears for her security, and warned that her academic career has been ‘effectively ended’ by Sussex Union branch.

It comes after Sussex Police launched an investigation into whether a university philosophy professor was a victim of harassment after she faced a campaign of ‘bullying’ over her views on trans rights – as students were warned they could be disciplined.

Reacting to the BBC’s correction, Professor Stock took to Twitter to say she was pleased that her views were now correctly represented.

She wrote: ‘Yesterday some false statements were made about me, unchallenged, on BBC Politics Live, by a student obviously unfamiliar with my body of work and views. Pleased to get a correction on the programme today.’ 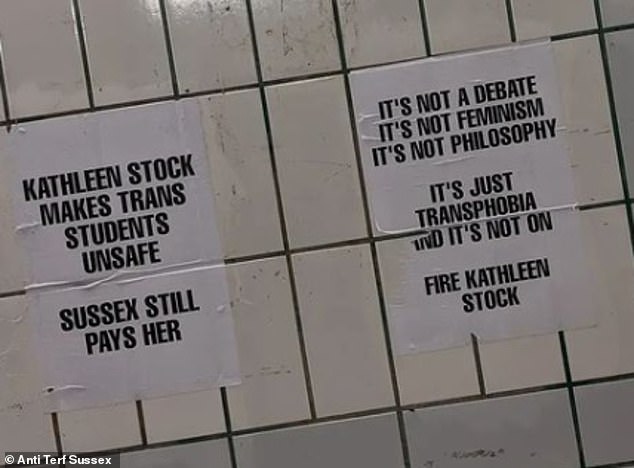 Reacting to the BBC’s correction, Professor Stock took to Twitter to say she was pleased that her views were now correctly represented

Banners saying ‘Stock Out’ have been held alongside burning flares and scores of people have been criticising her under the Twitter hashtag #ShameOnSussexUni – although many others have been using it to support her.

The university’s vice chancellor Professor Adam Tickell said last Friday that if any students can be identified as being involved, then ‘we will certainly take investigations and disciplinary action as appropriate under our regulations’.

Prof Stock had last week been backed by the head of the Equality and Human Rights Commission, Baroness Falkner of Margravine, who called the attacks disgraceful.

Anonymous, ap, defend, mob, trans
You may also like: