Follow
Home » World News » ‘Anyone can promise Ferraris’: Inside the fight to control the NSW firefighters’ union

An insurgent faction running for control of the NSW fire brigades union has promised it will battle the state government for a 13 per cent pay rise in a move the incumbent leadership say is selling members a fantasy.

A ticket led by state secretary Leighton Drury is up against a group of insurgents led by Kogarah firefighter Shane Kennedy, who argue Mr Drury has gone soft on wages and spent members’ money badly. 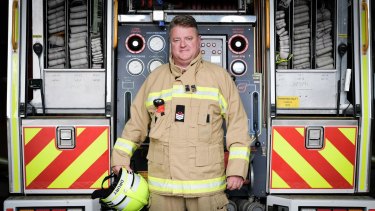 NSW state secretary Leighton Drury is fighting for his political life in a union battle both sides expect to be close.Credit:Jane Gunn / FBEU

Mr Kennedy wants a 13 per cent pay rise, which he says will take Sydney firefighters up to parity with their West Australian colleagues.

NSW public sector wages are capped at 2.5 per cent a year but because the government cut that to zero last year because of the coronavirus before the state industrial commission ultimately ruled on a 0.3 per cent bump.

“Anyone can walk around and promise Ferraris,” Mr Drury said of his rival’s plan. “It’s delivering on those policies that’s key.”

He wants a return to 2.5 per cent annual pay rises and extra jumps when the value of firefighters’ work increases. Going for bigger increases, Mr Drury said, would require trading away hard-won conditions.

Even Mr Kennedy admits 13 per cent is far-fetched.

“We’re under the realisation we’re not going to be able to get that much, but we want to bring it to a head,” said Mr Kennedy, arguing the figure was justified because of what some interstate firefighters earn and the cost of living.

A spokesman for NSW minister for the public service, Don Harwin, declined to comment.

Mr Kennedy’s group, called Members First, has accused Mr Drury of spending money in breach of union policies. Documents revealed in 2019 showed Mr Drury had spent about $1500 on his union credit card at stores such as tobacconist and bottle shops.

He said some payments were the result of his children using his card and all expenses had been repaid in accordance with union policy and checked multiple times.

“That’s just a smear campaign,” Mr Drury said. “It’s a desperate ploy from people with no ideas of their own.”

He also dismissed claims from Members First that the union had spent $129,733 on the Greens seat of Ballina at the 2019 NSW election for no good reason and without going through proper processes.

“What was the goal? Did we achieve it? Was the expenditure worth the reward?” the Members First ticket posted on Facebook.

Mr Drury said the vast majority of the money was spent not just on Ballina but on advertising in target seats across the state as the union campaigned to either get Labor into office because it had promised 200 additional firefighters or a minority government to give the union more influence.

There is a substantial number of freemasons in the fire service, who could represent a substantial voting bloc but have not formally endorsed a candidate.

Both Mr Drury and Mr Kennedy say they are not members of the fraternal organisation, which has a dedicated lodge – the term for an internal branch – just for firefighters.

The Freemason’s NSW grand secretary Stephen Green said that lodge’s focus was charitable and social, not political. “We absolutely frown on any involvement in religion or secular politics.”