An apprentice plumber fell into a canal and drowned after playing a ‘game of chemical Russian Roulette’ by mixing ketamine with alcohol, an inquest heard.

Matthew Dutton, 22, was left struggling to walk and acting ‘like a robot’ after he mixed the party drug with alcohol during a night out in Wigan, Greater Manchester last August.

The man, who had been watching the Champions League final, was walking home alone later in the night when he slipped and fell into a stretch of the Leeds and Liverpool canal, the hearing in Bolton was told.

His body was found three days later by a police underwater search team, with tests showing he had ‘significant’ levels of ketamine in his system on the night he died.

Coroner Timothy Brennard issued a stark warning about the experimental use of these drugs as he recorded a verdict of accidental death. 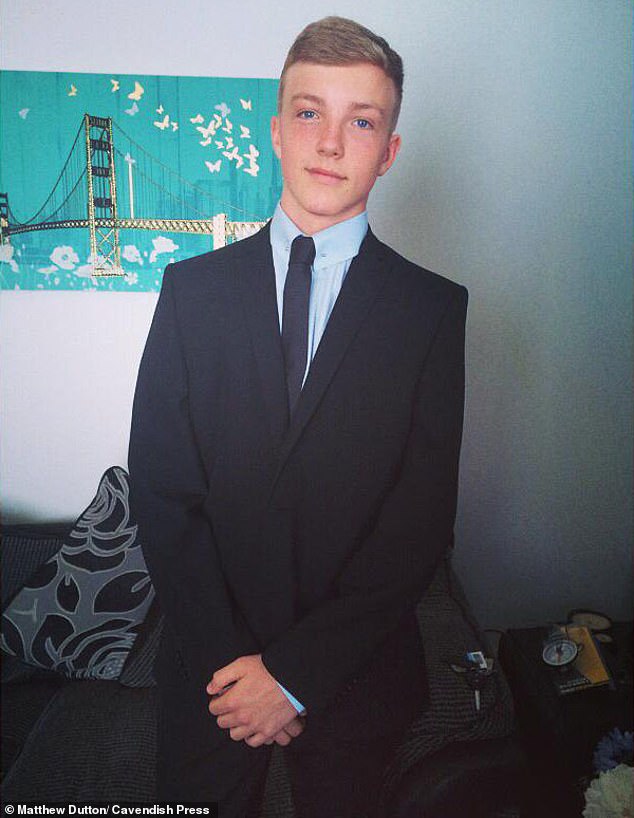 Matthew Dutton, 22, was left struggling to walk and acting ‘like a robot’ after he mixed the party drug with alcohol during a night out with friends in Wigan, Greater Manchester last August. Pictured: Mr Dutton

He said: ‘Taking any substance capable of leaving you incapacitated, confused and disorientated is akin to playing a game of chemical Russian roulette.

‘I am not to judge his actions in taking a drug used by young people to unwind and relax, particularly during a pandemic which has led many young people with time on their hands to seek solace and refuge in recreational drugs.

‘But although Matthew did not take an amount of ketamine which was lethal, he became unable to perform the simple task of walking home. He was left incapacitated, confused and disorientated as he tried to walk home, and he fell into the canal and drowned.

‘His mother and father have now been left with the consequences of his decision to experiment with recreational drugs that I am told are freely and readily available to younger members of our society. 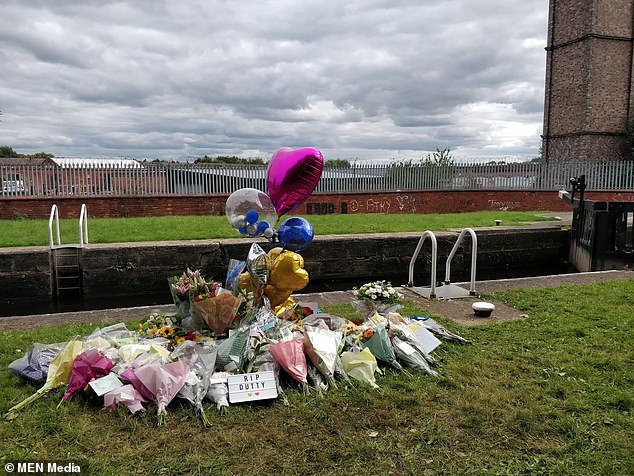 The man, who had been watching the Champions League final, was walking home alone later in the night when he slipped and fell into a stretch of the Leeds and Liverpool canal, the hearing in Bolton was told. Pictured: Tributes left to Mr Dutton 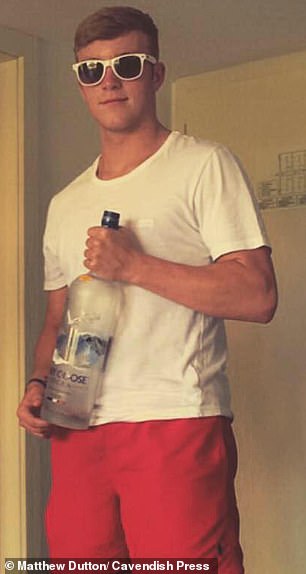 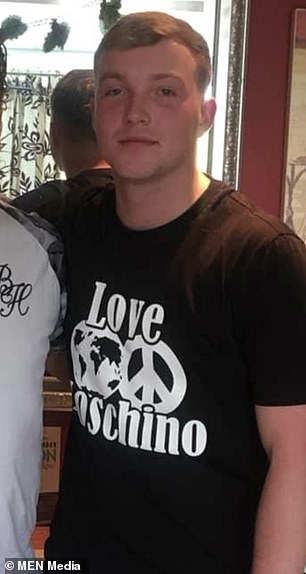 His body was found three days later by a police underwater search team, with tests showing he had ‘significant’ levels of ketamine in his system on the night he died. Pictured: Mr Dutton

‘Their message is that using drugs has led their son to this tragedy. If one person understands this as a result of reading about this inquest then some good will come out of it.’

Mr Dutton had visited the Oak Tree pub in Ince on August 23 last year to watch the Champions League final with his friends ahead of the tragedy.

According to Mr Dutton’s close friend Callum Jones, Mr Dutton arrived at around 6pm and throughout the course of the night drank approximately two pints of Carlsberg and three alcopops.

Mr Jones claimed to have not seen Mr Dutton take any drugs but admitted: ‘I knew he’d taken something, he had too much energy and I could tell by his eyes.’

Pub licensee, Nicola Fishwick, said that Mr Dutton appeared to be ‘tuned in’.

She said that he was staggering and that she had taken his car keys from him, because she didn’t want him driving home.

At around 10pm, Mr Dutton left the pub with his friend Michael Reardon and the pair started to walk down Belle Green Lane.

Mr Reardon said that during the night, Mr Dutton and himself had taken ketamine inside his car.

He added: ‘We met up earlier in day for food, Me, Regan and Matt, then we went to the pub but I’m not sure what time.

‘Matt brought the drugs but I don’t know where he got it from. We have had it together before, a couple of times on weekends. Not every weekend but sometimes when we have a drinks.’

Asked to describe the effects of how ketamine makes you feel, Mr Reardon said: ‘Very drunk and very disorderly.

‘It gives you a bit of a buzz. You like black out when you mix it with alcohol.’

The pair eventually made their way to Manchester Road passing driver Danielle Halliwell who stopped at a zebra crossing to let them pass.

She described Mr Dutton as: ‘walking like a robot, struggling to put one foot in front of the other.’ 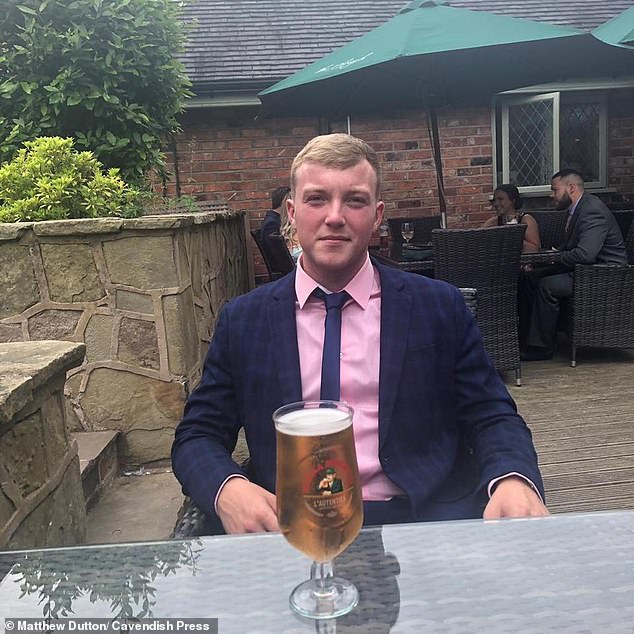 Coroner Timothy Brennard issued a stark warning about the experimental use of these drugs as he recorded a verdict of accidental death. Pictured: Mr Dutton

Ms Halliwell noted that both men appeared to be incredibly drunk and appeared to not be speaking to each other, instead focusing on walking.

A police statement, prepared by DI John Davies and read out in court by police coroner’s officer Stefan Wilson, states that the last sighting of Mr Dutton was at 10.25pm, heading towards the canal from Manchester Road.

The last activity from his phone was recorded at 10.56pm.

Mr Reardon said that he has no memory of leaving the pub and said that he tried to call Mr Dutton when he ‘came round’ and realised he was no longer with him, shortly after 11pm.

Greater Manchester Police carried out a search operation to try to find Mr Dutton and spent around 36 hours searching the Leeds and Liverpool Canal.

His body was found by an underwater search team, close to Lock 79, Rose Bridge, on August 26.

Following a post mortem, pathologist Dr Emil Salmo recorded ‘drowning’ as the medical cause of death.

He said that there were no suspicious circumstances, no sign of third party involvement and no signs that Mr Dutton had attempted to climb out of the canal and failed.

Dr Salmo added: ‘Drowning can occur very quickly, especially if they go into cold water, as it can lead to reflex cardiac arrest.’

A toxicology report prepared by Julie Evans stated that Mr Dutton had alcohol and a significant amount of ketamine in his system at the time of his death.

She added: ‘There is a possibility of direct toxicity arising from ketamine as an explanation for death, or use could have affected his behaviour leading to the risk of accidental drowning.’

Mr Dutton tested negative for all drugs other than ketamine.

His mother Jacqueline Peet told the court that Mr Dutton was ‘popular’ and a ‘joker’.

She said that he was a ‘family man’ and had two nephews who he ‘absolutely doted on’.

Ms Peet agreed with Mr Brennand’s assertion that Mr Dutton ‘worked hard and played hard’, but she said that she did not know the extent of his drug use.

She added that she was ‘very proud’ of him.

His father Mark Dutton added: ‘I knew that he experimented but I’d had some quite strong discussions about not doing it and he assured me that he didn’t.

‘He would look forward to the weekend after working hard in the week.’

Recording a conclusion of accidental death, Mr Brennand said: ‘By reason of the deceased’s self induced intoxication, he became incapacitated, confused and disorientated while trying to walk home, falling into the canal and drowning.’

She said: ‘The outpouring of love and support that the family have received has been overwhelming.

‘Matthew Dutton was the most amazing brother, son, grandson, cousin, nephew, uncle and friend that anyone could have wanted.

‘Everyone who knew him knew how much he could annoy and torment but I was privileged to know the kind caring side, who was completely devoted to his nephews and they absolutely adored him.

‘Words cannot express how deeply heartbroken the whole family are, all our lives will forever be missing his shining smile and I’d give anything to have him here telling me a dodgy joke or raiding the cupboards.’