ASIAN superpowers are scrambling to build hypersonic missiles in a terrifying arms race as the world heads for a new Cold War.

Governments are pouring billions into new aircraft carriers, submarines and state-of-the-art missile systems in a frightening display of military might. 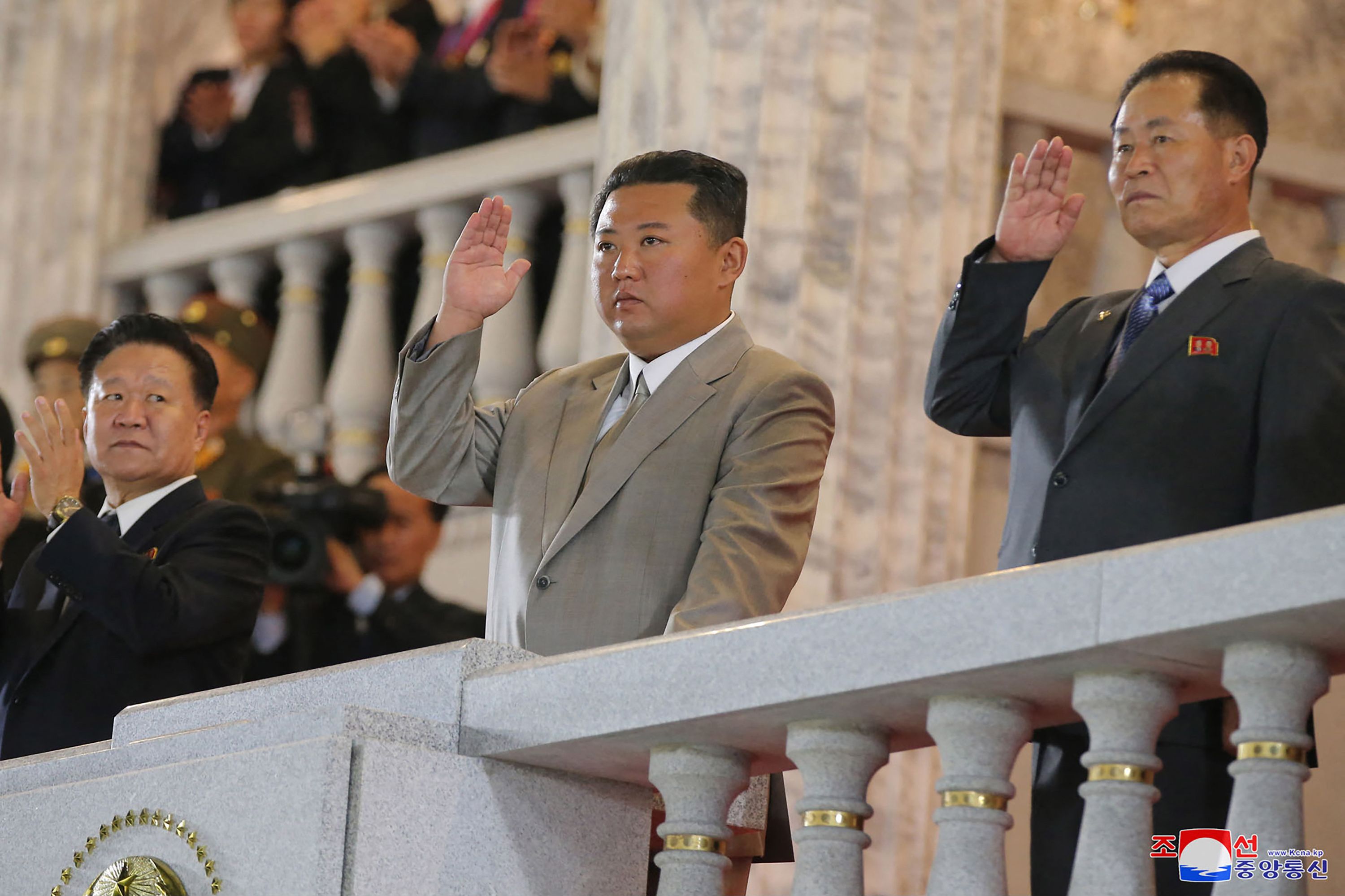 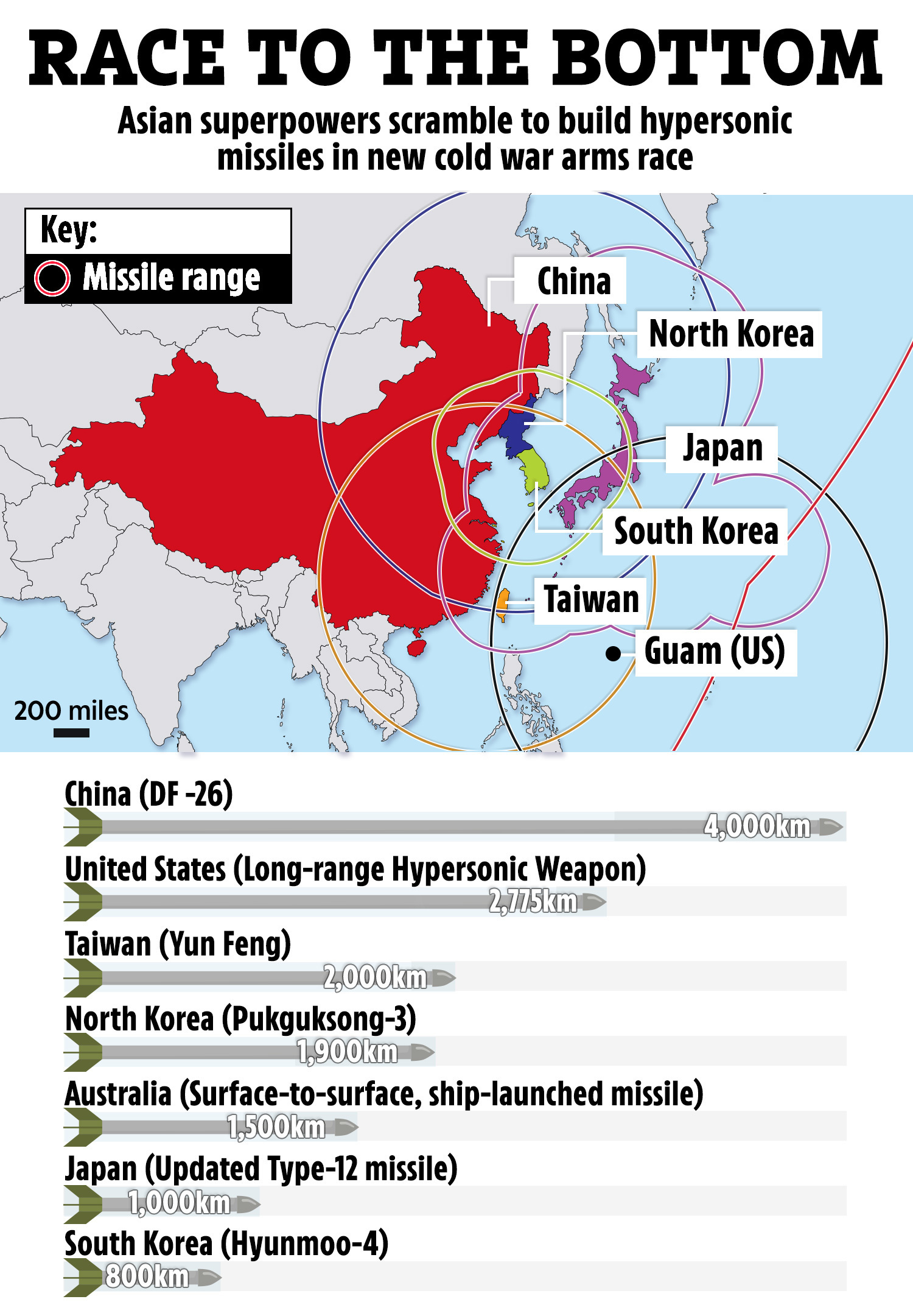 China alone has ploughed an extra 1.35 trillion yuan (£151 billion) into military spending this year – a modest 6.8 per cent increase – as it seeks to extend its claim over territory in the South China Sea.

The rising superpower also boasts of having DF-26 missiles that could knock out targets across South East Asia with deadly precision and speed.

Meanwhile North Korea stoked World War Three fears after testing a new cruise missile with a range close to 1,000 miles that could hit targets across South Korea and Japan.

But Kim Jong-un's latest military equipment pales in comparison to the new arsenal of weapons being acquired by his Asian neighbours.

On Wednesday, South Korea became the first non-nuclear nation to fire ballistic missiles from a submarine, mere hours after their rogue northern neighbours lunched theirs.

In the same week, Fumio Kishida, the man tipped to be Japan's next prime minister, said his nation should acquire preemptive military kit such as fighter jets or missiles that can take out enemy missiles on the ground before they've launched.

And the threat of the arms race speeding up is becoming evermore real as China continues to build military bases on islets in the South China Sea, sails warships close to the disputed Senkaku islands, which are administered by Japan, and lay claim over Taiwan.

Dr Edward Howell, a security expert on North Korea from the University of Oxford, told The Sun Online a potential arms build-up in East Asia would have "implications on US alliances with Japan and South Korea in the region" as the US retreat from the world stage as a superpower.

He said the US pulling out of Afghanistan and the rise of ISIS-K and the Taliban not only have implications on US as a military power but will also "have consequences on domestic assessments of the Biden administration, and what we may see in 2024".

Though it might be too early to call it an arms race, Dr Howell says, the region can expect a more unstable security environment in the future.

"South Korea’s recent test of a submarine-launched ballistic missile, on the same day as the North conducted short-range missile launches, makes clear that South Korea is keen to demonstrate its own, independent resilience and strength against growing North Korean nuclear and missile capabilities," he said.

South Korea is keen to demonstrate its own, independent resilience and strength against growing North Korean nuclear and missile capabilities"

"We must remember that Kim Jong Un himself stated, earlier in the year, that the DPRK would continue to develop cruise missile systems, and enhance the sophistication of its nuclear programme."

He adds: "For the Biden administration, which has stressed its focus on maintaining and bolstering US alliances abroad, a core question remains whether it will further develop its policy towards North Korea, which is currently one of 'diplomacy' and 'stern deterrence'". 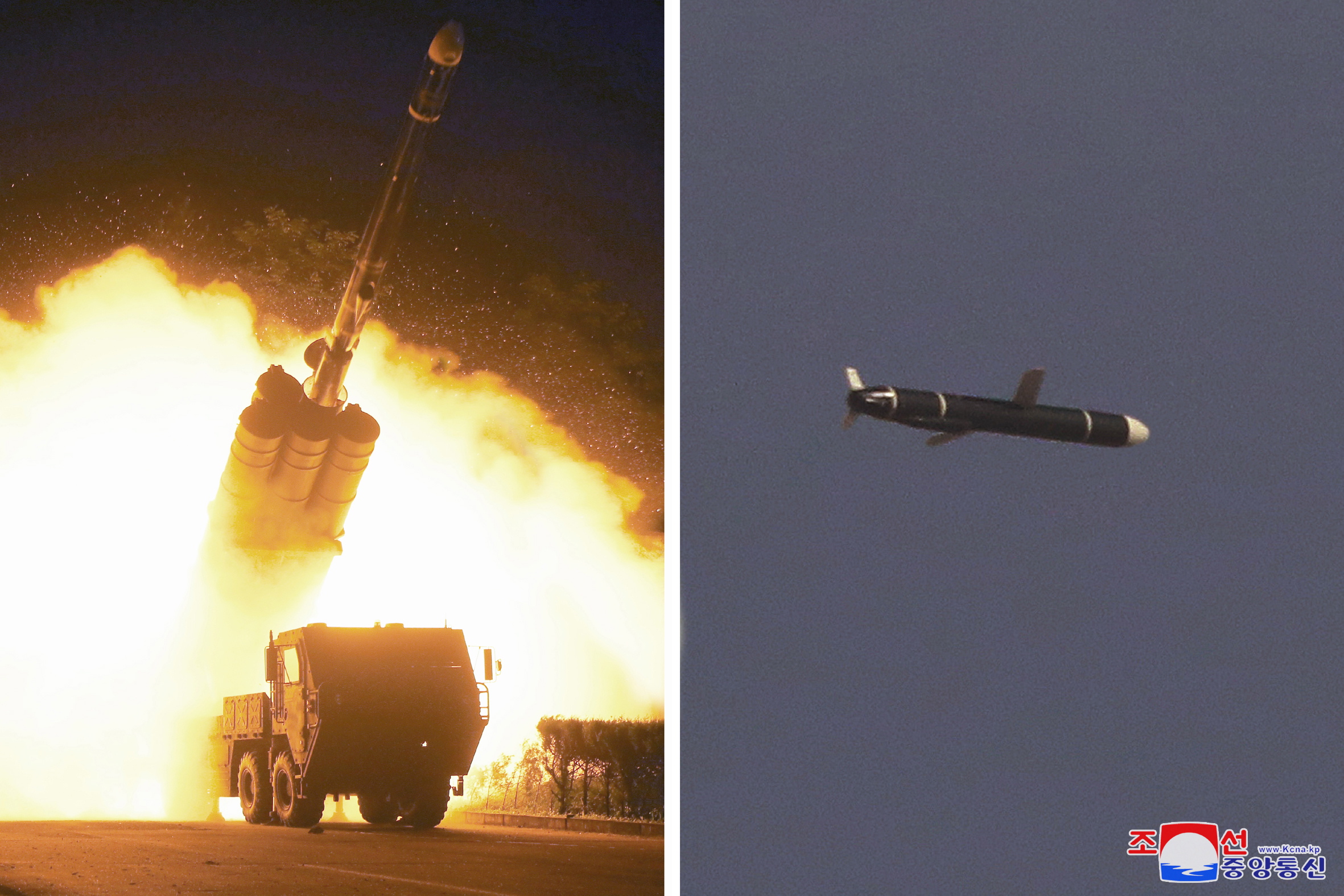 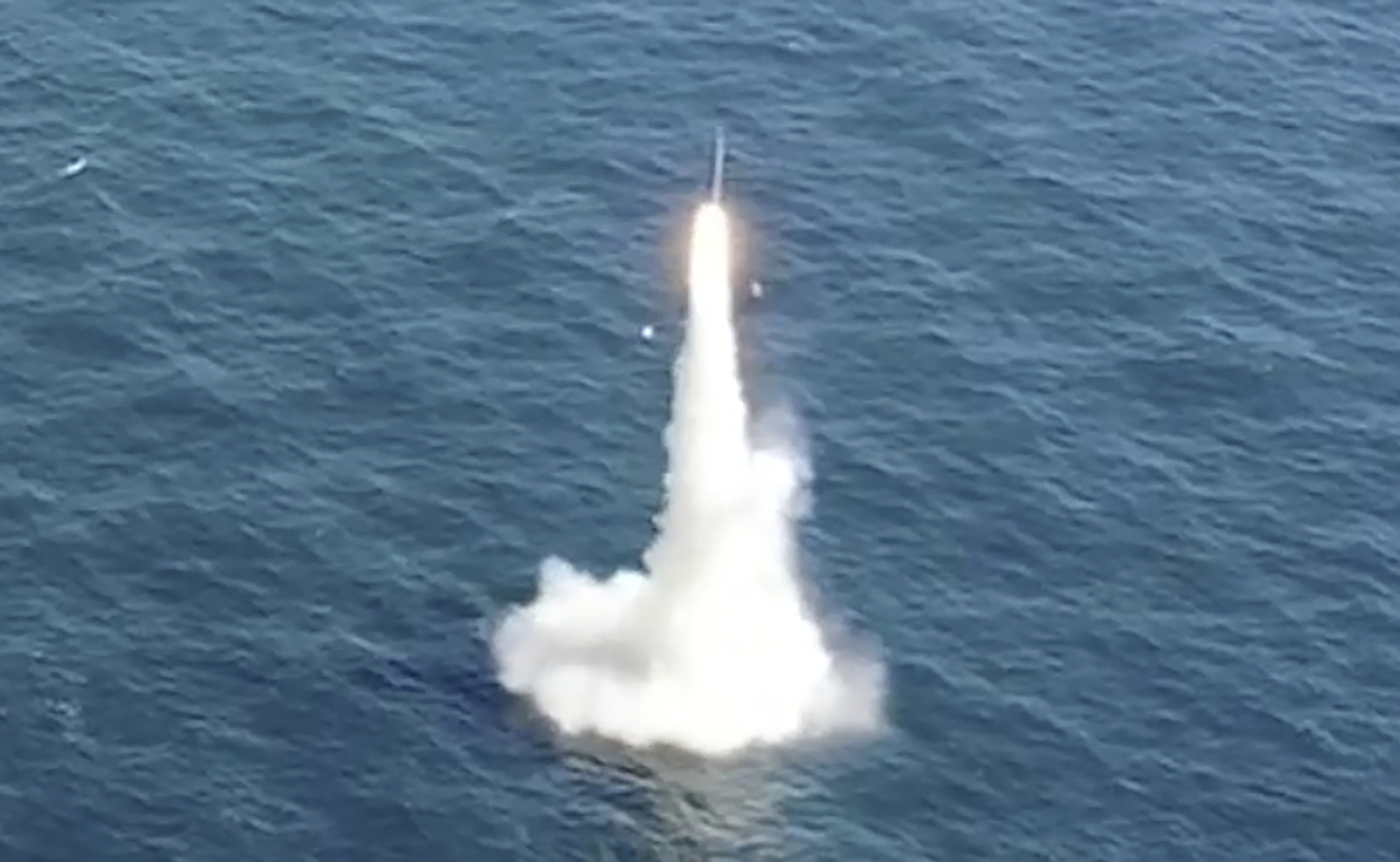 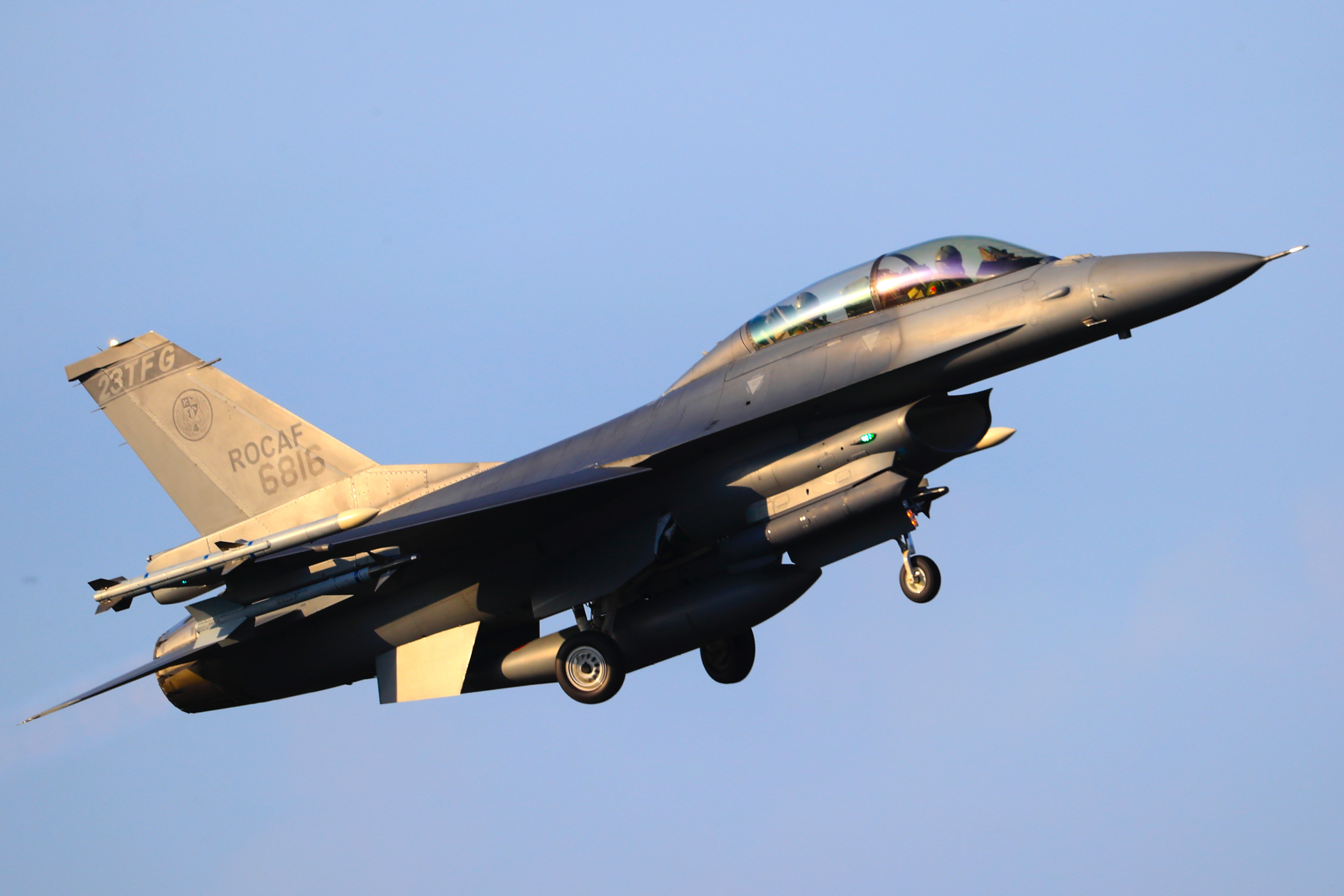