AstraZeneca uncovers ‘trigger’ of blood clots after its jab: Vaccine acts like a magnet and attracts platelets which body mistakes for a threat and attacks

Scientists believe they have solved the mystery behind the extremely rare blood clots caused by the Oxford-AstraZeneca vaccine.

A team of international experts, involving researchers from AstraZeneca, say that in a very small number of cases, the vaccine can set off a chain reaction which leads to the body confusing its own blood platelets for fragments of virus.

The shell of the vector vaccine — the weakened cold virus used to deliver the instructions on how to neutralise Covid — was found to act like a magnet and attract platelets, a protein found in the blood, which form clumps.

For reasons the scientists are still probing, the body then mistakes these clumps as a threat and produces antibodies to fight them, resulting in the platelets, which normally help the body stop bleeding, activating internally to form a blood clot.

But they stress this is extremely rare, with only 426 cases in the UK recorded the cases so far out of about 50million doses of the vaccine, equivalent to less than one in 100,000. The side effect has been linked to 73 deaths in the UK.

Researchers are now doing further work to learn more about the process that causes these clots and if the vaccine can be tweaked to reduce this risk. 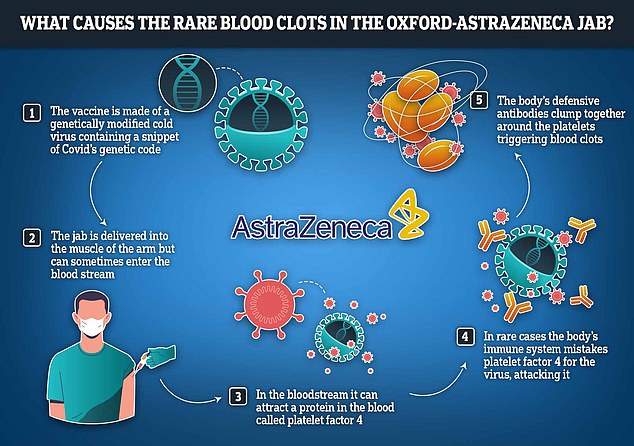 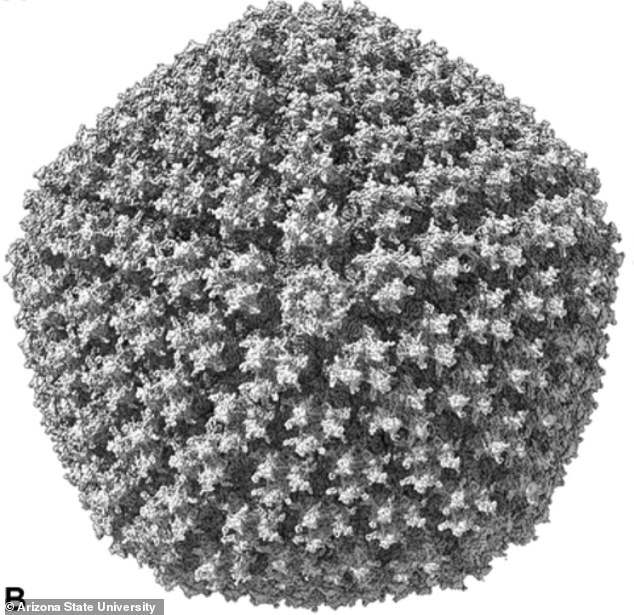 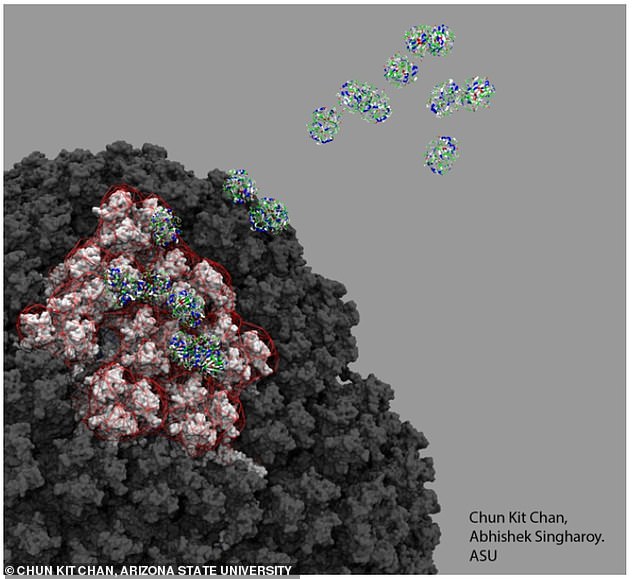 A cloud of platelet factor 4 being pulled towards the surface of the adenovirus delivery system of the Oxford-AstraZeneca vaccine, as seen through the high-tech microscope. Scientists suspect this is the start of a rare chain-reaction that could trigger life threatening blood clots

The Oxford University-AstraZeneca jab is a adenovirus vaccine, meaning it contains a genetically altered virus, in this case chimpanzee cold virus, modified to be incapable of infecting the human body.

The vaccine works by using the chimpanzee cold virus to deliver a portion of the Covid virus’s genetic code which the body then learns to recognise and prepare itself for a real infection from the virus.

Adenovirus technology is also used in the single dose Johnson and Johnson Covid vaccine which as also been linked to a small number of life threatening blood clot cases. The UK has donated the 20million doses of the Johnson and Johnson it ordered to the COVAX scheme — the UN’s vaccine sharing programme.

While the AstraZeneca jab has been proven to have saved thousands of lives, the rollout was marred after it was revealed there was a rare chance of developing a life threatening blood-clot after it was administered and deaths were reported.

The fallout out led to the jab being restricted to the over 40s in the UK and banned entirely in some countries, although it was later revealed the risk of developing a similar life threatening blood clot from Covid itself was higher.

A ‘fit and healthy’ mother-of-two died from a blood clot ‘likely’ to have been caused by the AstraZeneca Covid-19 vaccine, an inquest has heard.

Michelle Barlow, 51, began suffering headaches and nausea about a week after receiving her first dose of the jab in March.

She was eventually admitted to hospital and then tragically died later that month.

Senior coroner Timothy Brennand heard that Mrs Barlow, who worked as a civil servant for the Department of Work and Pensions for 34 years, had suffered blood clots likely to have been caused by the vaccine.

An inquest at Bolton Coroners Court heard the condition was a ‘very rare’ side-effect to the AstraZeneca vaccine.

Michelle, a mother-of two from Orrell in Wigan, received her first dose of the vaccine on March 7.

Michelle’s husband, Ian, told the hearing that in the days that followed, she began to experience ‘flu-like symptoms’, and later developed headaches, diarrhoea and nausea.

By March 19, Mrs Barlow’s symptoms had become ‘overwhelming’ so she sought help at Wigan Infirmary.

Doctors carried out tests, which showed she had a ‘very low’ blood platelet count. She was discharged and told to return for a check-up the following week.

However, Mrs Barlow’s condition failed to improve and she was readmitted to hospital the next day.

Doctors suspected she had a gastroenteritis infection, the inquest heard.

Mr Barlow said the family was unable to be with her at the hospital due to Covid restrictions and on March 22 he got a phone call from a nurse telling him to get to the hospital as soon as possible.

‘I knew something wasn’t right,’ he said. ‘When I got that phone call, I expected to go and see my wife and she would survive.’

Now the scientists involved in the new study, who published their findings in the Science Advances, say they may have uncovered the trigger causing theses rare vaccine triggered blood clots.

Essentially, after being delivered into the body adenovirus binds with a specific protein in the blood, known as platelet factor 4 (PF4), which is normally used by the body to promote coagulation in case of injury.

The researchers believe that in a case of ‘mistaken identity’  the body’s immune system considers this platelet cluster as threat and releases antibodies to attack it, clumping together to it and triggering potentially life threatening blood clots.

Professor Alan Parker, an expert in using adenoviruses in medicine from Cardiff University, and who was involved in the study, said: ‘VITT only happens in extremely rare cases because a chain of complex events needs to take place to trigger this ultra-rare side effect.

‘Our data confirms PF4 can bind to adenoviruses, an important step in unravelling the mechanism underlying VITT. Establishing a mechanism could help to prevent and treat this disorder.’

Professor Parker said the team hopes their findings can be used to both better understand the rare side affects of the new Covid vaccines and design better jabs in the future.

Researchers from Arizona State University were also involved in the study and used electro-microscope equipment to take incredible detailed images of the adenovirus used in the Oxford-AstraZeneca vaccine.

A spokeswoman for the company told the BBC: ‘Although the research is not definitive, it offers interesting insights and AstraZeneca is exploring ways to leverage these findings as part of our efforts to remove this extremely rare side effect.’

Other Covid vaccine that use the adenovirus technology include the Johnson and Johnson single dose jab.

The Medicines and Healthcare products Regulatory Agency, which body that examines safety of vaccines in the UK has identified 425 cases of major blood clots in Britons who have had the Oxford-AstraZeneca jab.  A total of 73 of these were fatal.

Studies have showed the benefits of giving AstraZeneca’s vaccine to 40-49 year-olds outweighed the potential risks, with the jab preventing 1.7 ICU admissions per 100,000 people, compared to the risk of 1.2 blood clots per 100,000 people.

However this risk/benefit calculation swung the other way when it came to younger age groups.

The AstraZeneca jab was pivotal to the UK’s initial vaccine rollout in the closing weeks of 2020, helping it become the most vaccinated nation in the West at the time.

Last week AstraZeneca boss Pascal Soriot suggested the UK’s widespread adoption of the jab, compared to EU nations, could explain why the continent is starting to record  higher intensive care rates despite having similar case numbers to Britain.

Mr Soriot told the BBC Radio 4’s Today programme: ‘When you look at the UK there was a big peak of infections but not so many hospitalisations relative to Europe. In the UK this vaccine was used to vaccinate older people whereas in Europe initially people thought the vaccine doesn’t work in older people.

‘T-cells do matter…it matters to the durability of the response especially in older people, and this vaccine has been shown to stimulate T-cells to a higher degree in older people.

‘We haven’t seen many hospitalisations in the UK, a lot of infections for sure…but what matters is are you severely ill or not.’

What is the risk of getting blood clot after AstraZeneca’s jab?

Earlier this year, British health chiefs recommended all under-40s are offered an alternative to AstraZeneca’s vaccine because of blood clot fears.

According to the Medicines and Healthcare products Regulatory Agency, as of September 1 there have been 425 cases of VITT and 73 deaths.

But statisticians analysed the numbers and found rates were slightly higher among younger adults, with females appearing to be at most risk, too.

Cambridge academics estimated around 1.9 in every 100,000 twenty-somethings given AstraZeneca’s jab would suffer serious blood clots alongside abnormally low platelet levels (thrombocytopenia) — the specific disorder linked to the jab. For thirty-somethings the figure was 1.5.

They compared that against the average number of Covid intensive care admissions that would be prevented by giving that cohort the jab. And they then analysed the risk/benefit ratio in different scenarios, based entirely on how widespread the disease was at the time.

For example, only 0.2 ICU admissions would be prevented for every 100,000 twenty-somethings given the jab at prevalence levels seen in April (fewer than 30,000 infections per week). For adults in their thirties, the figure was around 0.8.

It showed, however, the benefits of giving AstraZeneca’s vaccine to 40-49 year olds outweighed the potential risk (1.7 prevented ICU admissions per 100,000 people compared to 1.2 blood clots).

But the decision to recommend under-40s are offered Pfizer or Moderna’s jab instead was basically only taken because the outbreak was squashed to extremely low levels, as well as the fact younger people are known to face tiny odds of falling seriously ill with coronavirus.

For older adults, who the disease poses a much greater threat to, the benefits of vaccination are clear, regulators insist. Jabs have already saved around 13,000 lives in England, top scientists believe.

However, because there were so few blood clots, it made it impossible for No10’s vaccine advisory panel to give an exact age cut-off. Instead, they were only able to analyse figures by decade.

The first clots to alarm people were ones appearing in veins near the brains of younger adults in a condition called CSVT (cerebral sinus venous thrombosis).

Since that, however, people have developed clots in other parts of their bodies and they are usually linked to low numbers of platelets, which is unusual because platelets are usually used by the immune system to build the clots.

In most cases people recover fully and the blockages are generally easy to treat if spotted early, but they can trigger strokes or heart or lung problems if unnoticed.

Symptoms depend entirely on where the clot is, with brain blockages causing excruciating headaches. Clots in major arteries in the abdomen can cause persistent stomach pain, and ones in the leg can cause swelling of the limbs.

Researchers in Germany believe the problem lies in the adenovirus vector — a common cold virus used so both vaccines can enter the body.

Academics investigating the issue say the complication is ‘completely absent’ in mRNA vaccines like Pfizer’s and Moderna’s because they have a different delivery mechanism.

Experts at Goethe-University of Frankfurt and Ulm University, in Helmholtz, say the AstraZeneca vaccine enters the nucleus of the cell – a blob of DNA in the middle. For comparison, the Pfizer jab enters the fluid around it that acts as a protein factory.

Bits of coronavirus proteins that get inside the nucleus can break up and the unusual fragments then get expelled out into the bloodstream, where they can trigger clotting in a tiny number of people, scientists claim.