At least 30 inmates on the loose after fleeing Mexican prison

Thirty prisoners, including the leader of a feared cartel’s assassin squad serving a 224-year sentence, remained on the run Tuesday after a New Year’s Day prison break.

Authorities initially reported that César Vega, the criminal group’s second-in-command, had also escaped before announcing Monday evening that he was among the seven inmates who were killed during a riot. 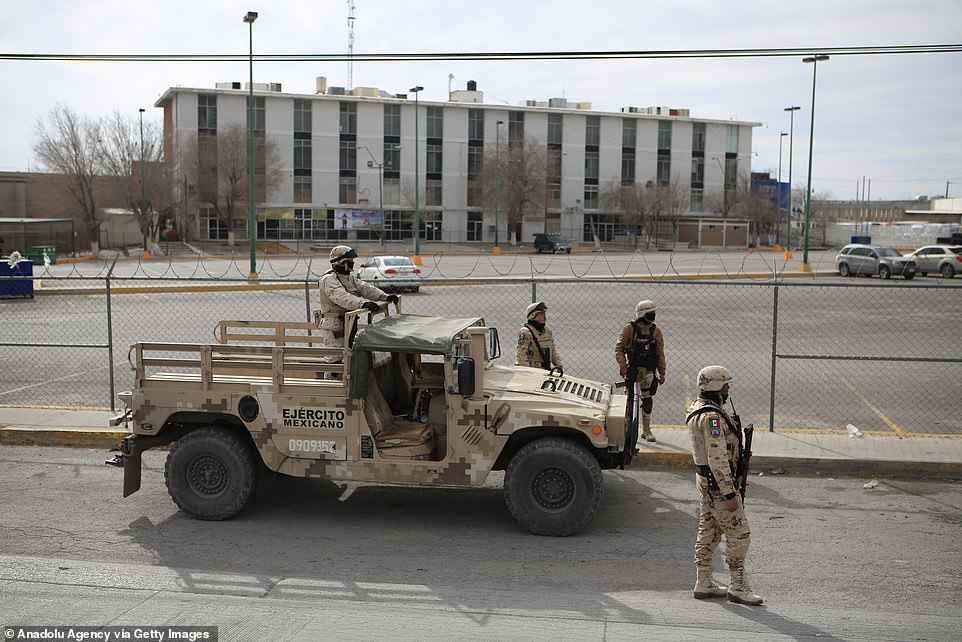 Security forces stand guard at the Cereso No. 3 state prison in Ciudad Juárez, Mexico, on Sunday. An attack launched by the Los Mexicles street gang freed jailed leader Ernesto ‘El Neto’ Piñón and led to the escape of 29 other inmates. Authorities said 19 people were killed 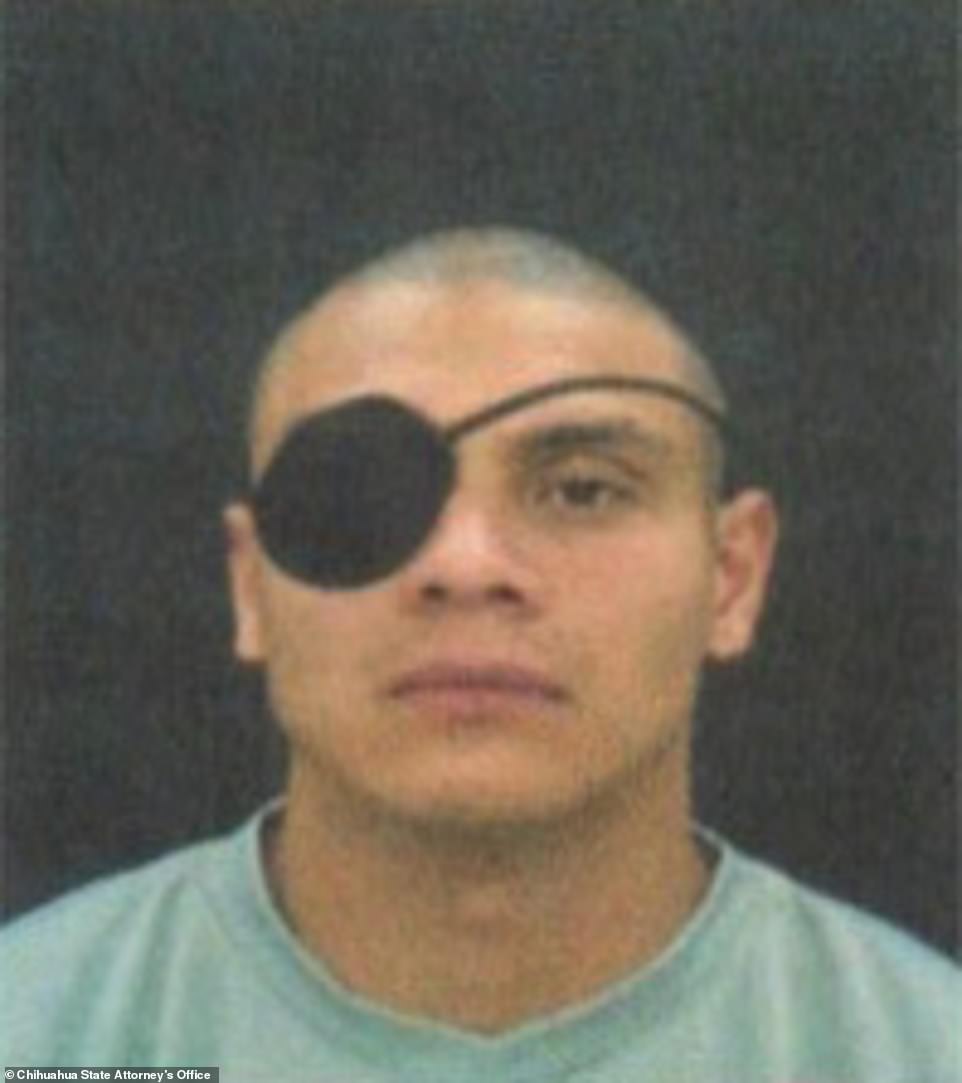 Los Mexicles leader Ernesto ‘El Neto Piñón is missing after he fled from a prison in Ciudad Juárez, Mexico, on Sunday morning during an armed attack that left 19 people, including six inmates dead. Piñón was sentenced to 224 years in 2010 after he was found guilty of kidnapping and murder charges

Authorities arrested five members of Los Mexicles following a high-speed chase and seized a cache of rifles and ammunition.

The United States Consulate in Ciudad Juárez advised U.S. citizens in the border town to shelter in place after reports of gunfire incidents were reported Monday night.

A Monday afternoon gun battle at a housing complex left seven people dead, including two cops, while security forces hunted down the fleeing inmates. No arrests were reported.

Cereso No. 3 director Alejandro Téllez was fired and placed under investigation Tuesday, the Chihuahua State Attorney General’s Office said in a statement.

In addition, at least 200 Los Mexicles jailed members were loaded onto buses in the early hours Tuesday and transported to Abraham González International Airport, where they boarded two National Guard flights to other federal jails.

Mexico’s Secretary for Security and Citizen Protection, Rosa Rodríguez, had announced Monday that plans were underway to transfer high-risk inmates from the Cereso No. 3 state prison to other penitentiaries in the country to prevent a copycat attack. 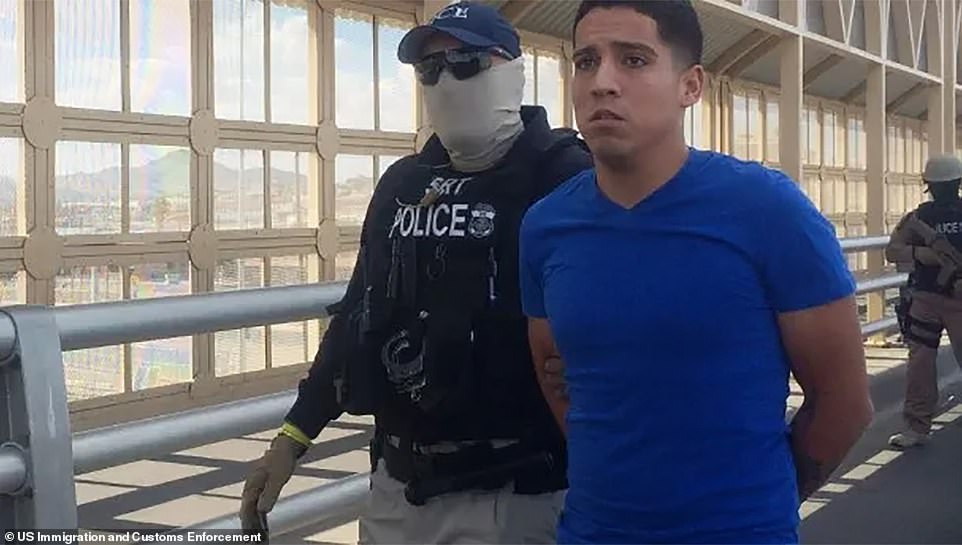 César Vega (pictured in September 2015), the Los Mexicles second-in-command, was killed during a riot at the Cereso No. 3 state prison after gang members launched an attack 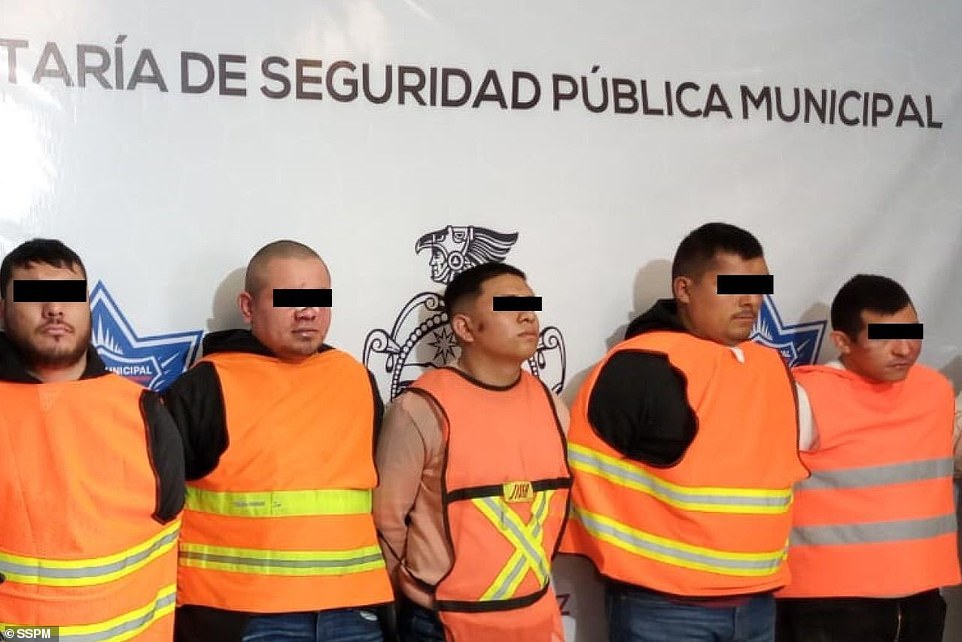 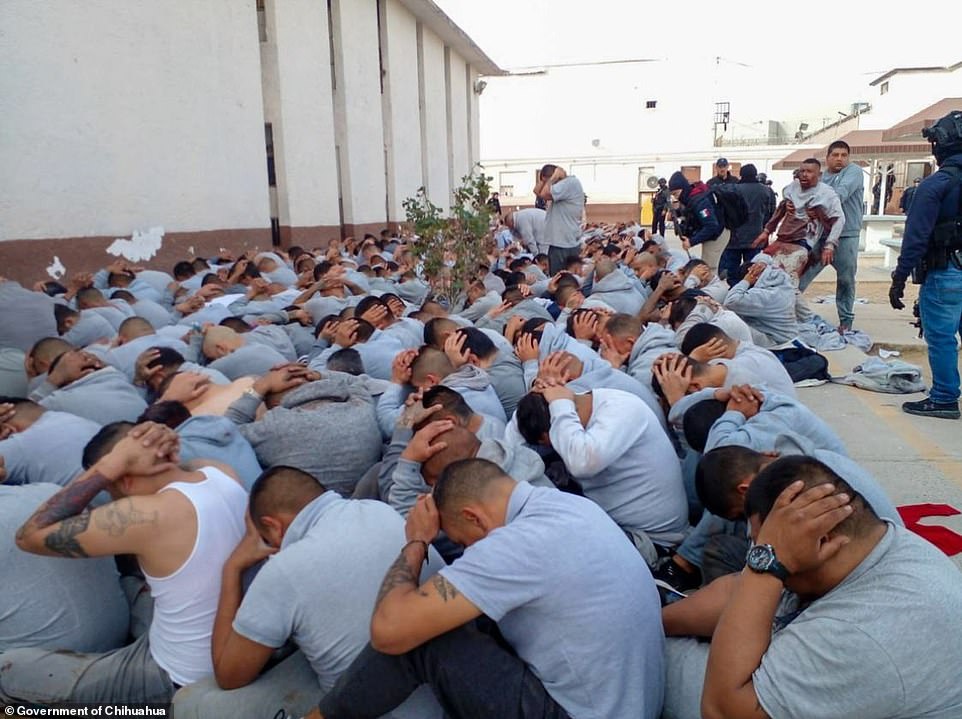 Inmates are rounded up outside the Cereso No. 3 state prison in Ciudad Juárez following the New Year’s Day deadly attack that left 19 people dead

The Cereso No. 3 state prison was overpopulated by 123% at the time of the attack, National Commission of Human Rights director, Nestor Armendáriz, told Radio Formula.

The agency’s 2021 National Diagnosis of Penitentiary Supervision found that the prison was severely impacted by overcrowding, lack of personnel and that not enough programs were being offered to prevent addiction and voluntary detoxification.

Saskia Niño del Rivera, cofounder of Reinserta, a non-profit that works with reintegrating and readapting convicts into society, called on the Mexican government to shut down the detention facility.

The activist pinned the prison’s unsavory conditions on the reality of the high presence of convicts who are members of the Los Jaliscos, Los Artistas Asesinos, Los Golfos and Los Mexicles street gangs.

‘It is a very complicated prison because of the way in which it has been divided is by dormitories, and the complexity of closing them so that the same gangs do not clash internally is extremely complex,’ she said. 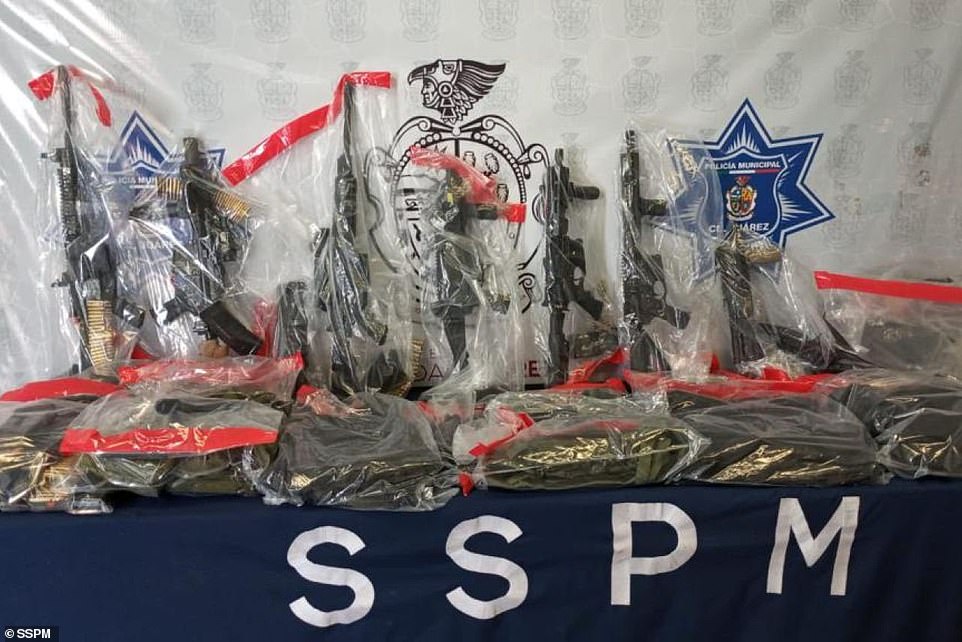 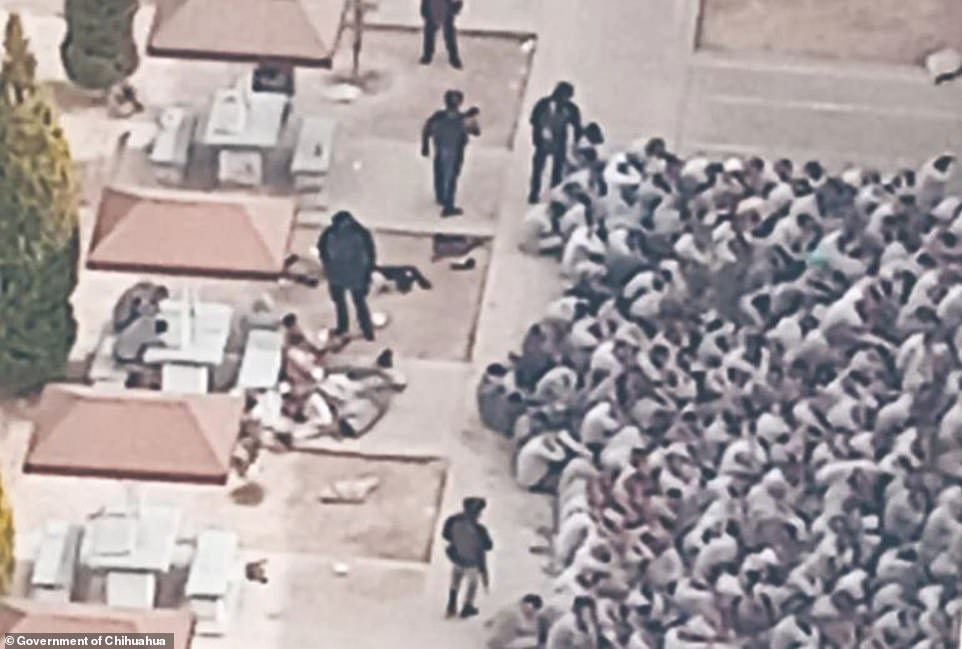 Inmates are rounded up and sat together outside the Cereso No. 3 state prison in the northern Mexico border town of Ciudad Juárez moments after security forces regained control of the penitentiary Sunday

Niño del Rivera added that Cereso No. 3 state prison officials were simply overwhelmed because they were dealing ‘with inmates who have levels of crime and crime leadership capacity much higher than what a state has to control.’

The prisoners’ free reign allowed them to set up 10 jail cells that were equipped with electronic goods, such as televisions, and one of them featured its own jacuzzi, according to Defense Minister Luis Cresencio.

Chihuahua State Attorney General, Roberto Fierro, vowed to restore the prison’s security system within three months while adding that they would seek to prosecute any official or guard involved in the attack that allowed Piñón and the other 29 inmates to escape.

‘Who did see it and who was allowing these actions, those are the ones who are going to bear the punishment because this should not have happened,’ Fierro said. ‘A series of corruption was discovered inside the prison; it must be said as it is.’

Piñón took the Los Mexicles top leadership spot after Jesús ‘El Lalo’ Soto was transferred out of the Cereso No. 3 state prison in February 2020.

He joined the gang as an 18-year-old in 2007 and was involved in numerous criminal incidents, including kidnappings, in Ciudad Juárez, where the criminal faction acted as the main enforcer for Joaquín ‘El Chapo’ Guzmán’s old Sinaloa Cartel. 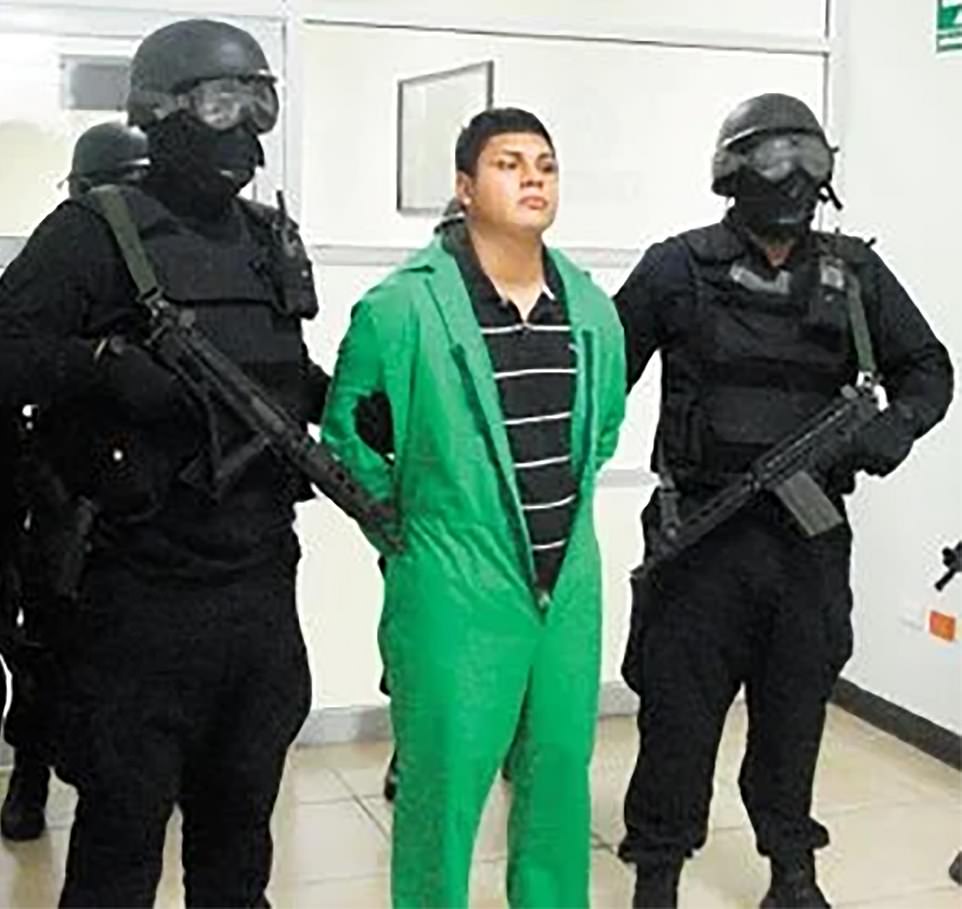 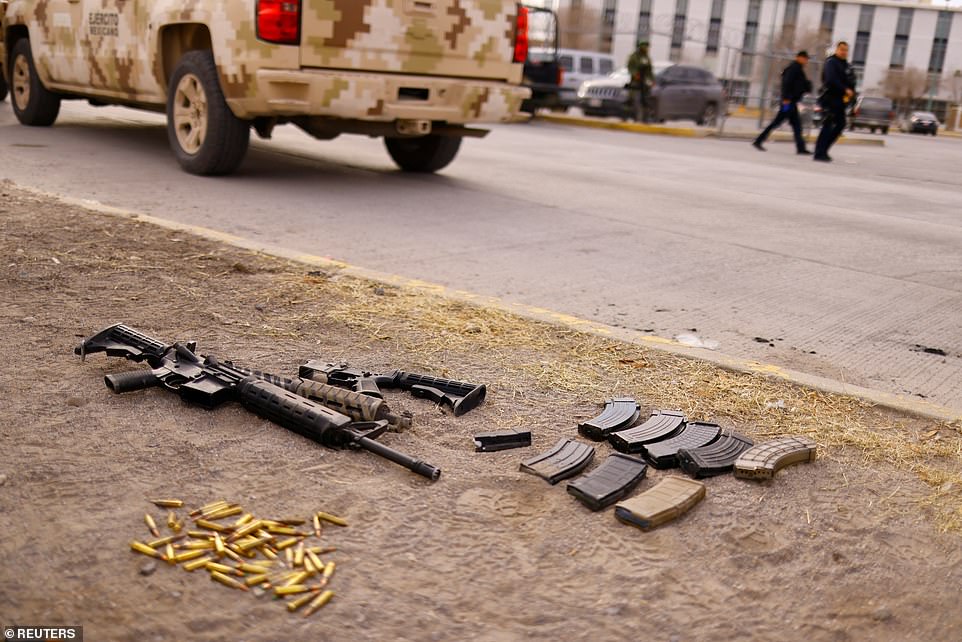 Guns and bullets are seen in front of the Cereso No. 3 state prison  that were recovered by the security forces Sunday after the Los Mexicles street gang launched an attack and freed their leader, Ernesto ‘El Neto’ Piñón

Piñón was found guilty of kidnapping and murder in 2010 and sentenced to 224 years in prison.

Authorities say he was also involved in ordering a wave of assaults throughout Ciudad Juárez on August 11 that left 11 people dead, 20 injured and multiple vehicles and business torched.

At the same time, he organized a riot at the prison in an attempt to flee, but security forces were able to regain control.

The citywide assaults were part of a rift reportedly sparked by Los Mexicles’ fallout with the Sinaloa Cartel faction that is overseen by Los Chapitos – El Chapo’s children – as the gang formed new alliance with Los Aztecas, the armed wing of the Juárez Cartel.

Los Mexicles had also joined forces with the Caborca Cartel, the criminal organization founded by infamous jailed drug lord, Rafael Caro Quintero, who is awaiting extradition to the United States, where he is accused of the 1986 kidnapping and murder of Drug Enforcement Administration agent Kiki Camarena.

The Caborca Cartel is also at odds with Los Chapitos.

Vega served as Piñón’s main confidant at the prison, where they both shared a cell.

He was deported to Mexico in September 2015, almost four years after he was arrested at an El Paso, Texas, fried chicken restaurant.

Vega was detained December 27, 2011 at Church’s Chicken where he was employed as a cook a year after he fled from Mexican authorities after the ambush of the prison van he was being transported in, according to U.S. Immigration and Customs Enforcement.

He and seven other Los Mexicles gang members abducted Natividad Torres at his Ciudad Juárez home on September 15, 2009.

The kidnappers sought a return of $47,000 in exchange for Torres’ release but ended up settled for just $700, a television and a 2008 Toyota. Torres was shot four times on September 15 and released the following day.

He died October 21 as a result of the gunshot wound and Vega and four other kidnappers were arrested the next month.

Vega was sentenced to 42 years for kidnapping and murder.