At Tesco, everyone’s welcome – and able to grow

“WITH THE right mindset, there are no barriers to opportunity at Tesco,” says Bernard Osei-Tutu. And he should know.

Bernard, 34, started at Tesco as a Saturday job when he was just 16, and is now manager of one of the company’s six home delivery fulfilment centres, working with a team of 850 people in Erith. 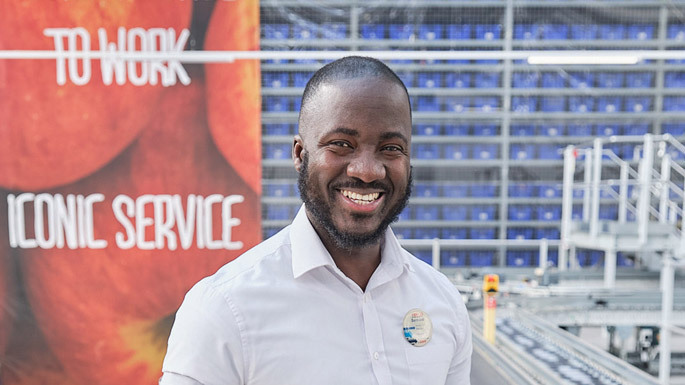 He’s also an agent for change, leading the drive for diversity and inclusion across those fulfilment centres.

“Mum worked as a cash clerk at Tesco in Wimbledon,” Bernard says.

“When I was in sixth form she grew frustrated coming home from work to find me lazing in bed on my days off.

“So she persuaded me to apply for a checkout job at her store. I loved it. My colleagues were great – like family – and I was proud to be earning my own money.”

That’s why, when Bernard went to Brunel University to study business management and accounting, he came home every weekend to work at Tesco – where he’d been promoted to team leader – as well as to enjoy his mum’s cooking and get his washing done.

After graduating, Bernard had a job lined up as a finance executive with a toy store.

Then his managers at Tesco asked him to consider staying with them.

“They really believed in me and that was so motivating,” Bernard says.

That belief proved justified: within three years, Bernard, aged just 24, had worked his way up to store manager.

She spent her twenties in and out of hospital, including a year-long stay. And when she found a part-time job with Tesco, her family gave it just six weeks.

Fifteen years later, Louise is still there, having worked her way up in store management roles to her current position as a senior manager in online delivery, coordinating 64 drivers.

“For a long time, I wasn’t comfortable in my own skin,” Louise says.

“I didn’t really know who or what I was. Tesco allowed me to find out by just giving me the space to be myself at work, to be authentic.

“Now I stand tall, embrace my differences and am honest with colleagues about my diagnosis. There’s always someone to chat with on my bad days. My long IVF journey, for example – I am very much able to talk about it.”

Now married and a new mum, after her wife gave birth to a baby boy, Louise is also part of Tesco’s LGBTQ+ Colleague Network, which is one of six networks across the company all colleagues have a voice. 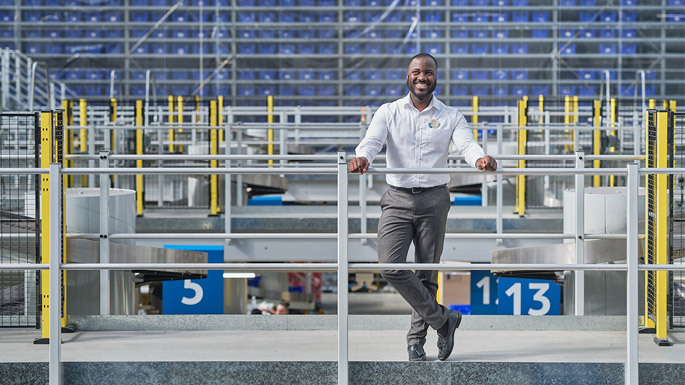 So how does Tesco allow people to grow? Bernard puts some of his success down to its mentoring programmes.

“When I started, there weren’t many black store managers, so I reached out to a very experienced colleague called Amara Omega-Sheriff at Ealing Metro,” Bernard says.

“He mentored me. We met every six weeks and he was always at the end of the phone so I could talk through any challenges. His guidance was invaluable.”

Seeing the value of mentoring for young people like Bernard, Tesco made it a central aspect of its Black Action Plan, which is part of the company’s Everyone’s Welcome drive.

In February 2022, Tesco published a report on its diversity and inclusion policies – and its title sums up the company’s ethos: Everyone’s Welcome.

The report sets out Tesco’s approach to building a workplace that actively celebrates the cultures, personalities and preferences of all colleagues – who in turn help to build on the success of the business.

As part of this, the aim is to achieve 3 per cent black talent representation at every level in the company by 2030 – to correlate with the 3 per cent of the general UK population that identifies as black.

The plan continues to grow, and black colleagues at stores across London have already been matched with senior mentors in Tesco head office. Bernard is now a mentor himself.

He says: “I’m glad to help. I can proudly say I’m the first black store manager to go on to manage a fulfilment centre.”

Bernard is also set on helping his colleagues achieve their own ambitions.

Being given a voice to speak about promoting diversity is a privilege.”

Louise agrees. “Work hard and be yourself at Tesco,” she says, “and you can achieve your dreams.”