Once the decision was made by John Howard back in September 2001 to join in yet another land war in Afghanistan, there were no good choices about how to proceed or when to withdraw. But there are bad choices and worse ones, and when it came to the endgame of this dismal chapter, Australia has made some very poor decisions. 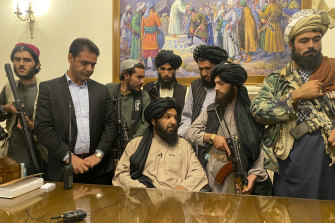 The Taliban have returned more powerful than ever. Credit:AP

We have come out of our longest war with only 41 casualties, but each has been keenly felt by their families. Hundreds of other veterans are traumatised, especially as they watch any gains erased. Our military honour has been blackened by the alleged war crimes uncovered by the Brereton report, which exposed some of our most elite soldiers treating Afghans like targets in a video game.

And our international standing is now compromised by our move to suddenly abandon our embassy long before figuring out how to provide safe passage to those Afghans who worked with us.

The Taliban were never vanquished, only suppressed, and they have returned to power 20 years later better trained, better equipped and convinced of the rightness of their cause.

While US President Joe Biden was claiming less than six weeks ago that it was highly unlikely that the Taliban would be “over-running everything and owning the whole country is highly unlikely,” most knew that this was exactly how it would end.

US Senate Republican leader Mitch McConnell has been saying for months it would resemble the fall of Saigon, and despite Secretary of State Antony Blinken’s “sky is not blue” denials, the panicked scenes at Kabul airport on Sunday were an uncanny echo of April 13, 1975.

The only surprise was the speed with which the endgame was played, as the insurgents swept the board of major cities in only a week, before strolling into the capital and asking for the keys to the abandoned presidential palace. The Cassandras of the Pentagon who pointed out after the withdrawal announcement that the Taliban no longer needed to seriously engage in peace talks must despair at how right they were.

The Trump administration dealt with the militants directly when Donald Trump wanted the troops home; now the Biden administration and its allies must work out – right away – how to do business with Afghanistan’s new leaders, negotiating with them for the right to evacuate without the helicopters being shot out of the sky.

Empowered by victories against the world’s biggest military force, the Taliban and their smooth-talking spokesmen are looking for respect on the world stage and for recognition as the legitimate government of Afghanistan.

While Australia, the United States and Britain will resist such a move, Russia and China appear to be open to the prospect. Russia is keeping its embassy open while other nations flee; China has already been talking to some Taliban leaders about their mutual interest in roads, bridges and mining. If the Taliban of the 1990s spoke heatedly about liberating their Uighur brothers, the new generation have learned enough realpolitik to make allowances for the enemies of their most recent enemies.

Afghans have endured 20 years of violence and instability and had no lasting gains. Many have been seen welcoming the Taliban in the past week after years of occupation by foreign forces who saw any villager on a road as a potential threat.

But this is a terrible time for those who enjoyed what little rights they have had to free speech, an independent judiciary and advanced education – and a deadly time for those who worked for Western allies in the fight against their new rulers.

The fall of Kabul shakes the world, triggering a new refugee diaspora and giving encouragement to extremism everywhere. The great powers are humiliated, the worst are, as always, full of passionate intensity.

The least Australia can do now is to make good on our vague promises to join the rescue mission and evacuate at least some of the Afghans still stuck in Kabul to whom we have already granted visas.

We decamped so hastily, we practically ghosted those who worked with us. When their countrymen and women come knocking on the door of Fortress Australia seeking refuge, we should recognise that it was our own actions in their homeland that forced them to flee.

australia, badly, Come, has, I, out
You may also like: