An Australian citizen and senior judge in Kiribati who is married to the Opposition leader of the Pacific island nation is fighting extraordinary moves by the Kiribati government to detain and deport him, as senior judges warned government officials risked being held in contempt of court.

Lawyers for Australian David Lambourne, a former solicitor-general of Kiribati who was appointed to its High Court in 2018, successfully applied to the country’s Court of Appeal on Friday for an urgent order releasing Lambourne from immigration detention pending a further court hearing on August 19. However, he remained in detention at the time of publication. 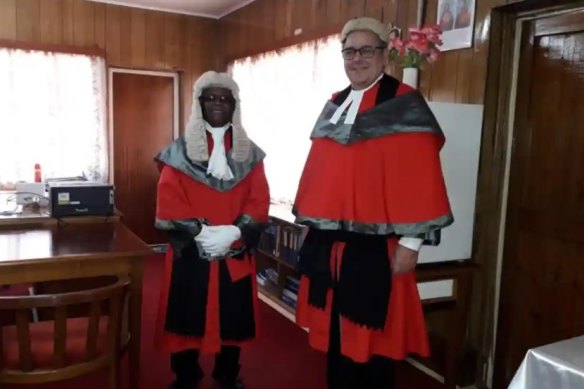 The Court of Appeal heard on Friday that Kiribati police and immigration officials tried on Thursday to deport Lambourne forcibly, in defiance of a court order earlier that day that the government “shall take all steps necessary” to ensure he was not deported pending further order of the court.

Lambourne is a longtime resident of Kiribati and lives with his wife, Opposition leader Tessie Lambourne, in the nation’s capital, South Tarawa.

Tessie Lambourne recently accused the government of “bending over backwards to accommodate the interests of China” after it withdrew the nation from the Pacific Islands Forum, the key diplomatic body in the Pacific.

“My assessment is that maybe China wants to isolate us from the rest of the forum,” she told the SBS in July.

The Court of Appeal said in a judgment on Friday that the government’s reported efforts to deport David Lambourne “appear to have been in clear breach of our order” on Thursday.

So, the government’s motivation is, in fact, political?

“Such behaviour is unacceptable and risks putting the Attorney-General and the persons directly concerned in contempt of court. It must cease,” the court said.

Sydney barrister Perry Herzfeld, SC, acting for Lambourne, told the court the circumstances of the case were “extraordinary” and officials attempted to deport Lambourne on Thursday on a Fiji Airways flight, triggering a standoff between the airline and the government. The airline took the view that it would not board Lambourne without his consent in light of the court order on Thursday.

“The government then took the position that if Fiji Airways didn’t board him, the aircraft wouldn’t be permitted to leave at all,” Herzfeld said. The flight eventually departed without Lambourne on board, but he was escorted by police to a hotel where he was detained.

“We now understand that the government has, despite this court’s order, continued to try to arrange Justice Lambourne’s deportation, this time via a Solomon Islands flight scheduled for over the weekend,” Herzfeld said.

The court heard that President Taneti Maamau, acting as immigration minister, made a second deportation order after the court’s orders on Thursday on the grounds that Lambourne had been “declared a threat or risk to security”.

Monoo Mweretaka, Kiribati’s Deputy Solicitor-General, appeared in court on behalf of the Attorney-General and was grilled about why Lambourne was declared a security risk.

Court of Appeal Justice Peter Blanchard, a New Zealander, said: “Might I say that what you are doing to Mr Lambourne has more potential to adversely affect Kiribati’s international wellbeing, judging by what I’m reading in international papers, than anything Mr Lambourne’s done.

“Nothing you’ve said so far comes close to convincing me that the government has got a case here. You may be able to produce one by next Friday.”

Asked why Lambourne could not reside at his home until the hearing next Friday, the Deputy Solicitor-General said: “You have to understand that Mr Lambourne’s wife is the leader of the Opposition, and there are supporters that always come to the house.

“We believe that once we put Mr Lambourne in the house, there would be something … going [to] happen.”

Blanchard replied: “So, the government’s motivation is, in fact, political?”

“Why did you mention the fact that his wife was leader of the Opposition?” Blanchard said.

Mweretaka said that “people always come to the house, so we don’t want any problem”. He alleged Lambourne was also breaching a recent visitor visa condition by working in Kiribati. Herzfeld said the allegations made against his client were “not accepted”.

The Court of Appeal – Blanchard, Rodney Hansen and Paul Heath – ordered on Friday that Lambourne be released on bail on the conditions that he reside at home and not visit the courthouse at Betio before next week’s hearing.

The court said it was “reasonably arguable” that any deportation under existing orders issued by the government would be unlawful, an issue that will be determined finally after next week’s hearing. The court made clear that its previous orders preventing Lambourne’s immediate deportation applied to the most recent deportation order.

The Attorney-General suspended David Lambourne as a judge in May, citing unspecified misconduct grounds.

The High Court presently is not functioning in Kiribati after the government also suspended the nation’s chief justice, distinguished New Zealand judge William Hastings, in late June. Hastings was due to hear a legal challenge by Lambourne to his suspension.

The government had previously sought to stop Lambourne re-entering the country from Australia but he returned this month on a visitor visa.

The Court of Appeal noted in its judgment on Friday that the Kiribati President attempted on Thursday to “recall, vacate and nullify” Lambourne’s appointment in 2018 as a High Court judge and to reappoint him for a term that expired on June 30 last year. The court said it doubted whether this was a valid use of specific power in the Constitution.

A Department of Foreign Affairs and Trade spokesperson said the government was “aware that suspended High Court Judge David Lambourne was served with a deportation order on 11 August and asked to leave Kiribati.

“DFAT is in direct contact with Mr Lambourne and officials from the High Commission in Tarawa are providing consular assistance. Due to our privacy obligations we cannot disclose further details.

“Our High Commission in Kiribati is continuing to monitor the situation closely and has sought further information from the government of Kiribati.