The federal government has quietly changed the rules with less than 48 hours until the international border opens and now said it will recognise the vaccination status of Australians who have received a mix of two vaccines.

The change will particularly affect Australians living in Canada where millions have received a jab or AstraZeneca and Pfizer rather than a two-dose course of either brand and enable them to return home without having to quarantine. 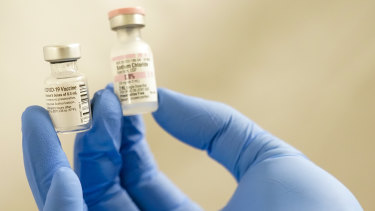 It’s crucial to get either vaccine into people’s arms as quickly as possible untries with nothing.Credit:AP

The ban preventing Australians from leaving the country without an exit visa will be lifted from November 1, enabling fully vaccinated Australians to travel overseas.

NSW and Victoria will also remove the cap on the number of citizens, permanent residents, visa-holders and their immediate family members who can enter for the fully vaccinated allowing the tens of thousands of Australians who have been locked out of the country during the pandemic access for the first time in nearly two years.

But despite NSW’s decision to reopen to the world, a move subsequently followed by Victoria, there has been a litany of outstanding issues relating to vaccination status that threatened thousands of Australians ability to get home, including how those with mixed doses would be treated.

Late on Friday night, the Department of Home Affairs updated its online advice and said: “Australia considers you to be fully vaccinated if you have completed a course of a Therapeutic Goods Administration (TGA) approved or recognised vaccine.” 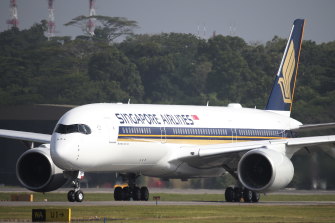 Singapore Airlines is pleased with the decision. Credit:AP

The late-hour change comes after the government was forced to exempt children who may not be fully vaccinated because they are coming from countries where vaccines are either not available, not approved for use in under-18s or are only being given in a single-dose course like in the UK.

They will need to quarantine at home for seven days as well as undergo additional testing.

Karl Schubert from Singapore Airlines confirmed the airline would not separate families or deny them boarding if children aged between 12-17 were not fully vaccinated to the Australian Governments’ standard. 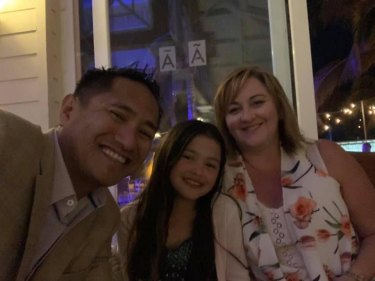 “The new guidelines issued by the Commonwealth, NSW and Victorian governments means families will be able to return to Australia together, which is a very pleasing outcome for everyone involved,” he told The Sydney Morning Herald and The Age.

Renae Moncrieff hasn’t been home for six years and said it had been a time of “absolute frustration” not knowing if she and her family would be punished simply for being vaccinated under Canada’s system, which encouraged the mixing of vaccine brands.

“It’s been a roller coaster of emotions for us. So close and yet so far. You do all the right things – we signed up to be vaccinated as soon as we were eligible – to keep yourself and others safe, but still risked being not recognised as ‘fully vaccinated’ in Australia,” she said.

She said the government had had ample time to resolve the issue of how to treat those with mixed vaccinations but had left families in the lurch by failing to prepare.

“Leaving this sort of decision until just hours until the international border opens has caused more unnecessary distress for Australians overseas,” she said.

“These issues have been obvious since vaccines began being rolled out in other countries and the Australian authorities have had ample time to come up with coherent solutions that don’t involve leaving Australian families in the lurch.”

But despite the changes she said she was still cautious about booking a flight home for Christmas for her, her husband and daughter even though it is something she would dearly love to do.

“I’m still hesitant to book flights at this stage because what’s to say that there won’t be another development that will affect us, or we happen upon airport staff that don’t thoroughly know the rules and we have a situation on our hands,” she said.

“Plus, airlines have their own rules and regulations, so we need to make sure everything lines up for us and nothing changes for the duration of our trip. There are a lot of balls to juggle with international travel now.

She called on the Australian governments to provide more accessible up-to-date information about what the rules are, saying the current help lines were not always clear.

|The information needs to be clear and concise. All these government sites and ‘help lines’ need to be on the same page.

“Even up until last night there is still confusing information (or lack of information) regarding mixed dose vaccinations,” she said.