A mourner in Sydney has recalled the Queen’s words that “grief is the price that we pay for love” as he attended St Andrews Cathedral to watch a live telecast of her funeral in London.

The cathedral, along with Government House in Canberra and Federation Square in Melbourne were among venues that hosted viewings on Monday night.

The cathedral held solemn choral hymns for 90 minutes before the funeral, which was projected onto a large screen inside. 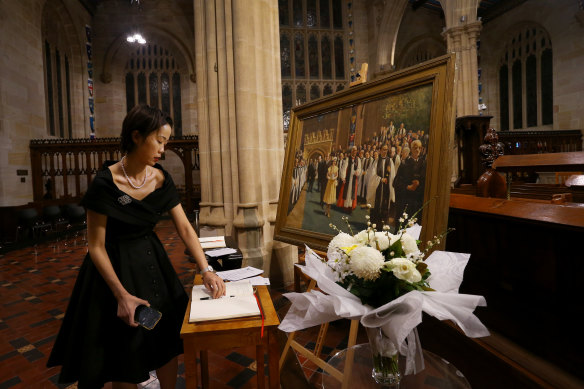 Fiona Wong leaves a message of condolence on the Queen’s death at St Andrew’s Cathedral in Sydney.Credit:Getty

“My mother is English, so I guess we’re part of a royalist family, with that allegiance,” Matt Palmer said as he arrived at the service.

After watching royal weddings at home, Palmer said he wanted to farewell the Queen at St Andrew’s as a way of paying tribute to her faith

“As Elizabeth herself said, grief is the price that we pay for love.”

Mourner Michelle Raft said the Sydney cathedral was a fitting place to farewell the Queen, who visited the church in 1954.

“I like the idea that she’s been here and that we’ll honour her together,” Raft said.

Melbourne’s landmarks will remain lit until a national memorial service on Thursday, with bagpipes sounding in Perth in the late monarch’s honour.

Prime Minister Anthony Albanese is among more than 2000 people attending the funeral in London, along with the governor-general and a small delegation of Australians.

Albanese wore a suit by M.J. Bale, while his partner Jodie Haydon wore a dress by Karen Gee and a hat by Jane Lambert.

He was among the estimated crowd of 750,000 people who viewed Queen Elizabeth’s coffin in Westminster Hall before her state funeral.

The funeral took place at Westminster Abbey at 8pm AEST before a committal service held at St George’s Chapel in Windsor.