The Australian honours system is borked. Far from being a system which really does honour those who have contributed to this country of ours, Australian honours appear to reward those who’ve done their actual paid jobs. The awards are now just additional ornaments to high status employment.

It is less venal in the lowest category, the Order of Australia medal; but ludicrous elsewhere. Now we even have senior people who managed COVID19 getting an award, less than 18 months into the pandemic. Surely longevity of effort and achievement should be factored into any public recognition. 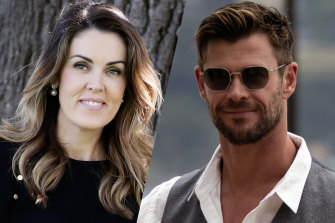 Peta Credlin and Chris Hemsworth are among those to receive Queen’s Birthday honours.Credit:Alex Ellinghausen, Getty Images

The Order of Australia is meant to recognise Australians who have demonstrated outstanding service or exceptional achievement. When I read that, I understand it means someone who has gone above and beyond, not someone who met their key performance indicators in a job where the KPIs should be high anyway. Someone paid a truckload of money gets to have all of the benefits that entails. More freedom to throw yourself into your job. Less likelihood of having to trouble yourself with cleaning and cooking and tiresome life admin. More opportunity to contribute. It is a privilege to volunteer and we should recognise that above all else.

The most obvious example on the 2021 Queen’s Birthday honours list is the award of an Order of Australia to Peta Credlin, whose citation says: “For distinguished service to parliament and politics, to policy development, and to the executive function of government.” Pretty sure that’s the job description for the chief of staff to a prime minister, work for which Ms Credlin has already been rewarded handsomely, maybe a quarter of a million a year. Perhaps the award was really a mark of gratitude from some wag and there’s an unpublished citation somewhere which says: “For services to Australia. No matter how hard she tried, her boss still lost his gig of making our lives miserable.”

Also, the hot Hemsworth, Chris, who gets his award for significant service to the performing arts, and to charitable organisations. OK. He is a patron of a charity and gives money to environmental groups. I suppose that’s a bonus considering we still seem to have awards for services to minerals and mining and even one this year for services to the fossil fuel industry (cunningly disguised as service to business). 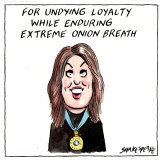 Credlin and Hemsworth are just a couple of names you will recognise. There are hundreds of honourees who have services to [insert relevant industry], not so many for volunteering at Meals on Wheels or the Girl Guides or for running netball competitions where your kids don’t play. It is a greater effort to deliver outstanding service or exceptional achievement when you are doing it beyond your actual paid work. Those people, those volunteers, give the incomparable gift of time, of sustained labours, with no expectation of anything beyond personal satisfaction. There are not enough of those names on the list. Yes, we must take some responsibility for that (don’t forget to nominate your local wonder) but too often I hear of people who have been nominated again and again. And nothing. Still missing from the list are Helen Caldicott, Julie Bishop, Adam Goodes and Carmen Lawrence, all of whom have contributed well past their paid involvement in public life. Bishop must really have infuriated her former colleagues if Credlin is ahead of her in the queue.

I suppose the good news is that we are nearly at gender parity – 44 per cent – on the honours list and Credlin is part of that. Even better news from Victoria, where the public service initiative to nominate women has succeeded – a rollicking 53 per cent. Champion work and the Victorian honourees look grassrootsy rather than astroturfy. My favourite might be Pam Robinson who was awarded an OAM in 1990 and this year was promoted to an AM. That’s sustained effort.

But back to pandemic honours. At the time, the announcement of these awards by the Prime Minister on January 24 passed me by. He said, “Individuals recognised for their contribution, service or achievement relating to COVID-19 will feature on a dedicated COVID-19 honours roll as well as the official Australian honours database from the Queen’s Birthday in June.” Good as his word.

People who have been doing a decent job of managing the pandemic are recognised and awarded honours at various levels, from Frances Adamson’s Companion in the general division of the Order of Australia, down to various meritorious awards, for those working in the public service, emergency, police and more. Look, I’m grateful for their service, don’t get me wrong, and I am sure they have done great work. But surely that’s what these folks are meant to do, to do their jobs well. They already have so much, social, cultural, economic capital in spades. Do they need even more recognition than that?

Frankly, I don’t know if we can save the honours system until we have a republic. Then we can start all over.

Jenna Price is a visiting fellow at the Australian National University and a regular columnist.