Norwegian police have identified the body of a one-year-old baby found on the coast as a missing 15-month-old who died in the English Channel last year.

Artin has been missing since October 27, when four members of his family drowned while trying to reach the UK.

On Monday, police revealed the child’s body had been found on New Year’s Day in the southwest of the country near Karmoy, some 900 miles away from where his boat sank.

‘We didn’t have a missing baby reported in Norway, and no family had contacted the police,’ Camilla Tjelle Waage, the head of police investigations, told the BBC.

‘The blue overall wasn’t a Norwegian brand either [and] that indicated the baby was not from Norway.’

This was confirmed by DNA, allowing authorities to inform the boy’s relatives. His remains will be flown back to Iran to be buried, according to the BBC.

Artin died alongside his family – construction worker Rasoul Iran-Nejad, 35, his wife Shiva Mohammad Panahi, 35, along with Anita, nine, and Armin, six – when their boat capsized.

The Kurdish-Iranian family were from the city of Sardasht in western Iran, near the Iraqi border. They had traveled through Turkey and Italy before trying to reach the UK from France. 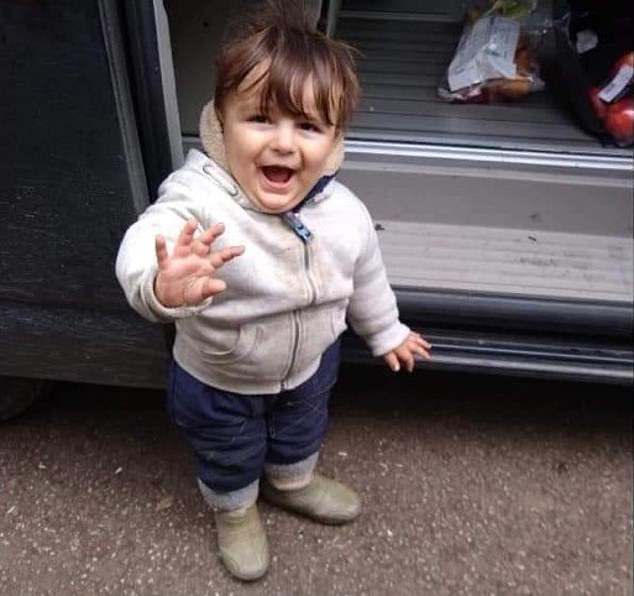 Norwegian police have identified the body of a baby found on the coast as a missing 15-month-old who died in the English Channel last year. Artin has been missing since October 27, when four members of his family drowned while trying to reach the UK 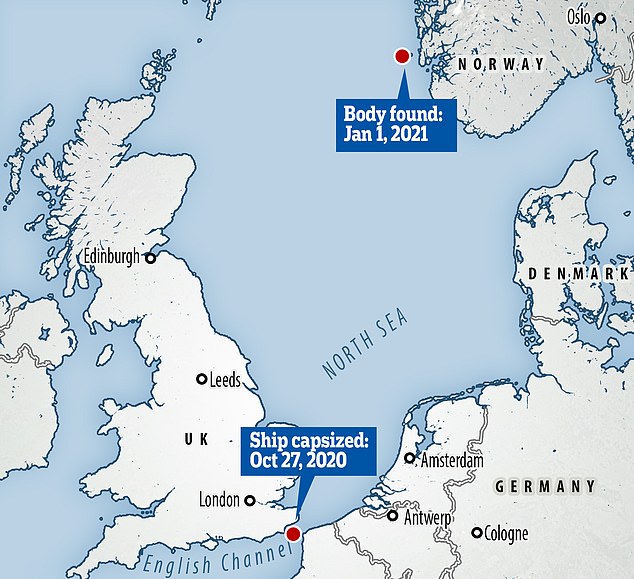 On Monday, Norweigan police revealed the child’s body had been found on New Year’s Day in the southwest of the country near Karmoy 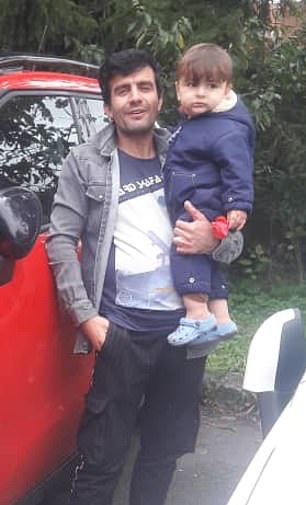 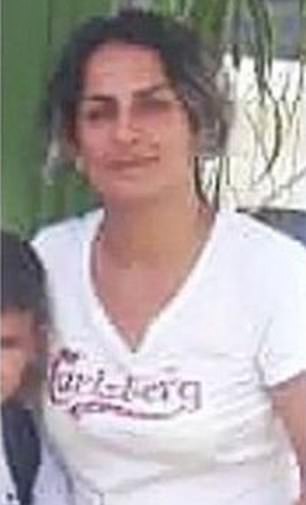 Rasoul Iran-Nejad, 35, with Artin, (left) and his wife, Shiva Mohammad Panahi, 35, (right). The family are pictured in a French migrant camp hours before attempting the perilous crossing 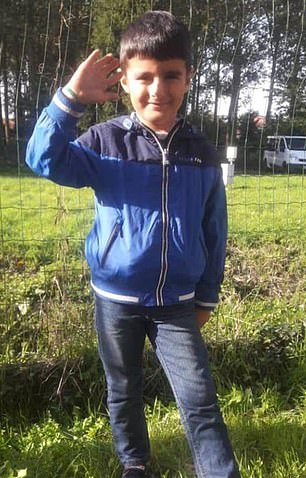 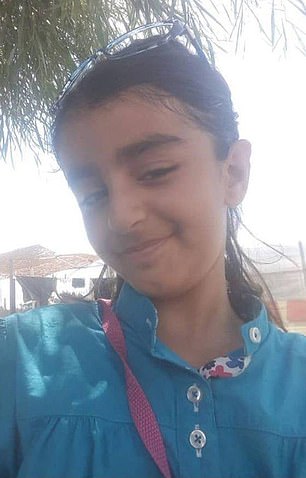 The bodies of Armin, six, and Anita, nine, were recovered from the Channel near Dunkirk by French coastguard last year

Fifteen other migrants also on the boat were taken to hospital and an investigation into the sinking was launched in France.

The family paid people smugglers £21,600 for a new life in the UK and agonised over the decision in a French tent city for days.

The family were sleeping in a two-man tent in a makeshift camp in the Puythouck woods that is home to at least 200 immigrants, mainly from Iraq and Iran. A pair of shoes, a frying pan and a toy were outside the tent.

They eventually attempted the crossing in hopes of securing a ‘quicker’ asylum process and a decent education for the children in the UK.

A series of text messages, thought to have been sent by Ms Mohammad Panahi a few days before the family boarded the boat included one saying they ‘have no choice’ but to cross the Channel.

Another message said: ‘If we want to go with a lorry we might need more money that we don’t have,’ the BBC reported.

A third said: ‘I have a thousand sorrows in my heart and now that I have left Iran I would like to forget my past.’

Camp residents described hearing the family’s desperate cries in the days before they departed for Britain as they argued about whether to make the crossing.

They told how Shiva agonised over whether they should take the three young children across the Channel on such a tiny boat. 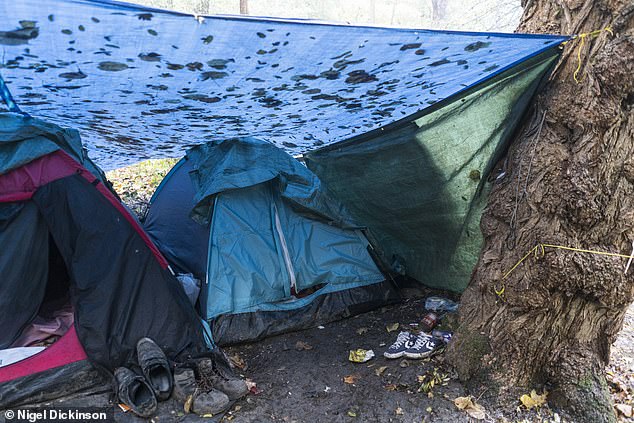 The family were sleeping in a two-man tent in a makeshift camp in the Puythouck woods that is home to at least 200 immigrants, mainly from Iraq and Iran. A pair of shoes, a frying pan and a toy were outside the tent. Pictured: The family’s tent (on the right) 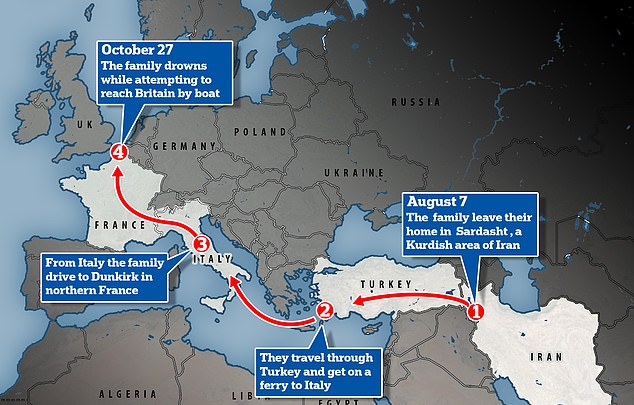 Ahmed, 30, who slept in the next-door tent, told the Mail: ‘The last night before he left, the father was fearing for the children’s lives. They were all desperate and crying. And they were worried about the money, too, as they had borrowed it so had to go. They were really desperate.’

The family’s perilous route from Iran: Smuggled by boat, truck and two failed crossings from France by train – as two migrants remain missing

The Iran-Nejad family left West Azerbaijan Province in Iran on August 7 to travel to Turkey and on to Greece, where they were arrested.

They were deported back to Turkey after they were arrested, strip-searched and tear-gassed by Greek police, Iranian Kurds have revealed.

One migrant who travelled with them from Turkey back to mainland Europe claimed that they had ‘lost all their belongings’ and were given money to ‘buy new clothes’ after their deportation from Greece.

The migrant, who asked not to be identified, said he had taken pity on them when he met them in Turkey. ‘They had lost all their belongings,’ he told The Times. ‘I gave them some money to buy new clothes.’

The Iran-Nejads then sailed across the Aegean Sea a second time, but to Italy where they avoided arrest.

From Italy, the family crossed the border from Italy into France in lorries, stopping in several cities along the way, unnamed migrants said.

According to Mr Iran-Nejad’s brother Khalil Irannazhad, the patriarch had initially decided to stay in Germany or Switzerland before changing his mind and carrying on to France.

Family members claim that the Iran-Nejads then stayed on a camp near Calais before moving to Puythouck, but were evicted by police and moved to a nearby hotel after social services found them a room.

Sources told The Times that Mr Iran-Nejad was leant money to pay smuggling gangs to get them into Britain.

‘We begged him to not try to cross by boat. He insisted on going.’

He added: ‘Rasoul was saying, ”I want to be in peace, I don’t want to fear for my life any more”. But his wife had second thoughts about going. Rasoul told her it was the only way as the [asylum] process is quicker in the UK. They could have stayed in Germany or France.

‘They only wanted for their children to go to school in England and have a better life.’

Iran has a long history of discrimination against ethnic Kurds, with thousands travelling to Europe each year with the help of people smugglers.

While equality of religions is guaranteed in Iranian law, in reality Sunni Muslims struggle to establish places of worship and schools for their children.

According to an Amnesty International report from 2008, Iranian Kurds have been subjected to discriminatory hiring policies that make it hard to get jobs, with their home regions under-funded and neglected, leading to ‘entrenched poverty’.

Kordestan, the centre of the Kurdish community in Iran, is one of the country’s poorest provinces. Its economy relies heavily on farming and handicrafts.

Kurds have also been subjected to forced evictions and live in largely substandard housing, lacking proper sanitation and water supplies. Some Kurdish housing has not been sufficiently rebuilt since the Iran-Iraq war in the 1980s, according to UN reports, when the Kurds were targeted by Saddam’s forces.

The town of Sardasht, where the migrant family who drowned hailed from, was among those targeted – struck by poison gas dropped from Iraqi fighter planes. At least 113 people died while thousands more were injured.

Kurdish leaders say the victims were never given proper medical care, and some still suffer from debilitating lung conditions.

Kurdish children are often forbidden from speaking their native language in schools, and Iran bans mothers from giving their children certain Kurdish names.

Literacy rates are also significantly lower for Kurdish students – particularly women – than in the Iranian population as a whole.

Those who do speak up about the plight of the Kurds face arbitrary arrest, detention, torture, and the death penalty.

According to the UN, there were around 1,800 Kurdish political prisoners being held in Iran in 2017. Charges against them ranged from eating during Ramadan, to cheering the results of a referendum on Kurdish independence in neighbouring Iraq.

In a major incident in 2005, Iranian security forces shot and killed Kurdish opposition leader Shawan Qaderi and two other men in the city of Mahabad, the capital of the Kurdish region, tied their bodies to a jeep, and hauled them through the city.