Balenciaga’s creative director Demna is being allowed to continue on in the role despite growing outrage over its use of children in a bondage-styled shoot.

The Georgian native, 41, has been widely blamed and criticized for the scandals, with growing calls for him to either resign or be fired.

But on Friday, nearly two weeks after the scandal broke, he released a statement in which he apologized for the ‘wrong artistic choice’ of using children in the ad campaign, but made it clear he was going nowhere.

‘I need to learn from this, listen and engage with child protection organizations to know how I can contribute and help on this terrible subject.

‘I apologize to anyone offended by the visuals and Balenciaga has guaranteed that adequate measures will be taken not only to avoid similar mistakes in the future but also to take accountability in protecting child welfare in every way we can,’ he said.

Before the scandal, Demna was the darling of the fashion industry and was credited for boosting the profits of Balenciaga’s parent group, Kering, by $1billion. 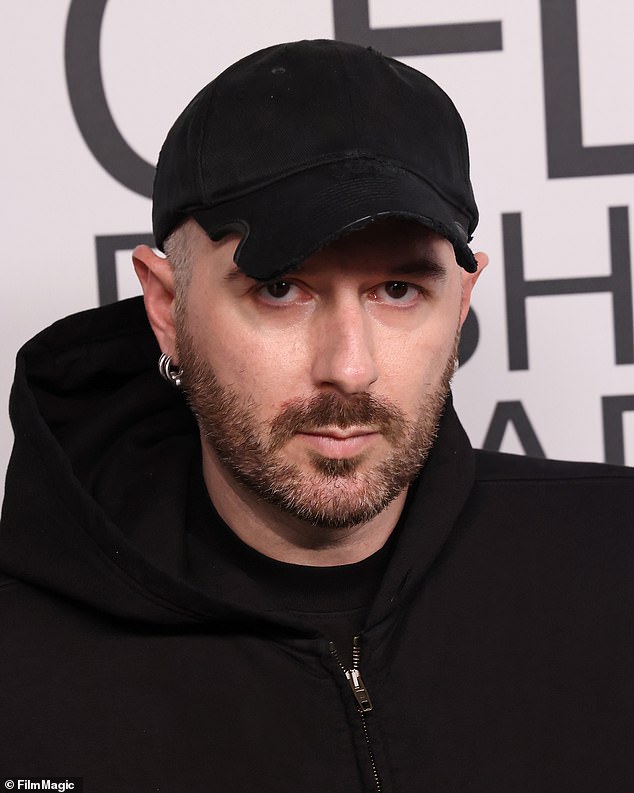 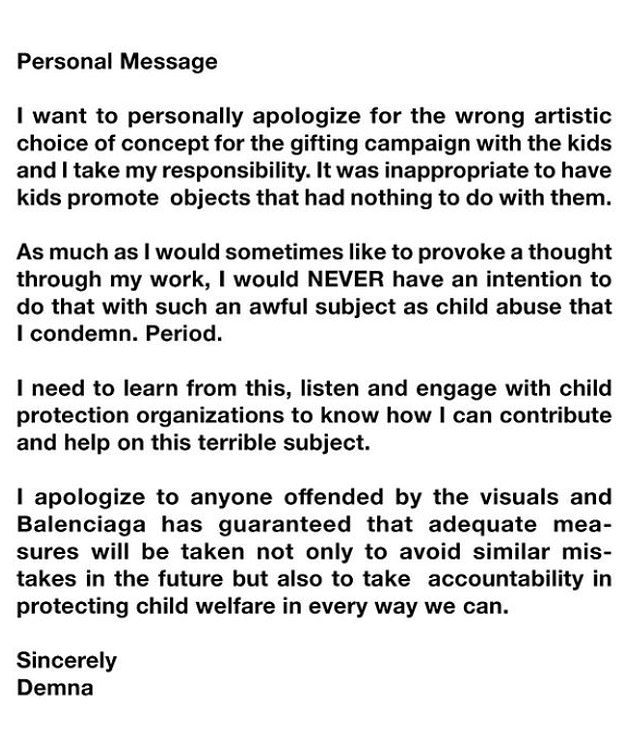 But on Friday, nearly two weeks after the scandal broke, he released a statement that suggested he was going nowhere

At the start of the statement on Friday, he said: ‘I want to personally apologize for the wrong artistic choice of concept for the gifting campaign with the kids and I take my responsibility.

‘It was inappropriate to have kids promote objects that had nothing to do with them.

‘As much as I would sometimes like to provoke a thought through my work, I would NEVER have an intention to do that with such an awful subject as child abuse that I condemn. Period.’ 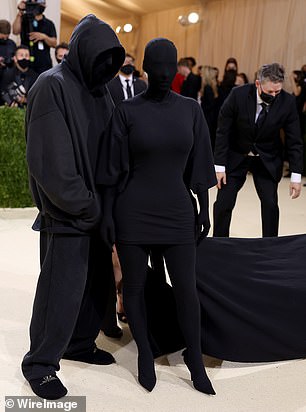 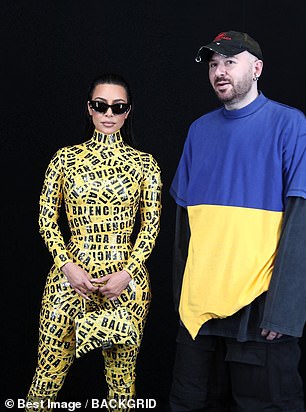 Demna with Kim Kardashian at the 2021 Met Gala. The 41-year-olld Georgian native has been credited with boosting Balenciaga’s profits by partnering with stars like Kardashian 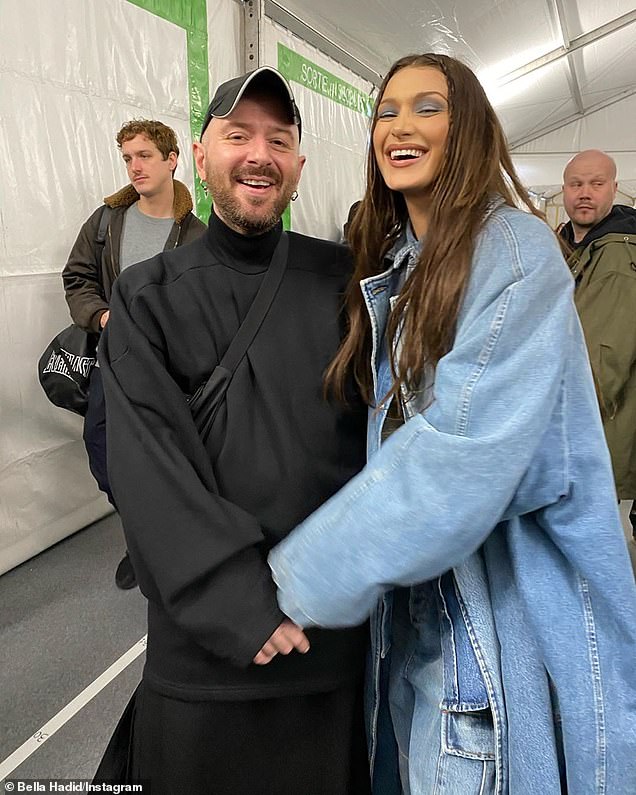 Demna with Bella Hadid, another of Balenciaga’s star models and ambassadors

There are planned protests in multiple cities this weekend with stars including Anna Lynne McCord vowing to boycott the brand.

There is also growing outrage over the fact that Nordstrom, Saks Fifth Avenue, Bergdorf Goodman and other department stores continue to sell Balenciaga products.

Demna lives in Paris with his husband and has not been seen since the scandal erupted two weeks ago.

It was not to advertise a line of kidswear or accessories.

Almost immediately, there was uproar among mothers and consumers who called out the impropriety of the children being involved. 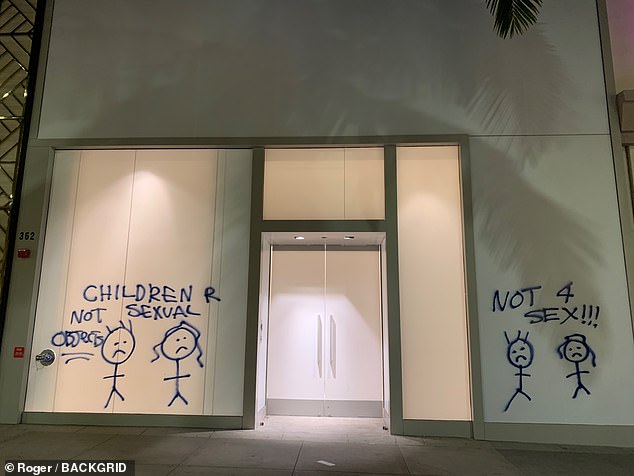 Vandalism on an empty store on Rodeo Drive last night in a clear protest against the brand, whose own store is nearby 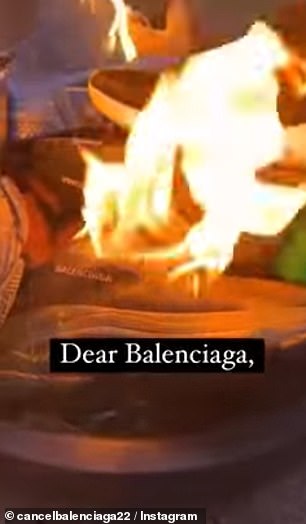 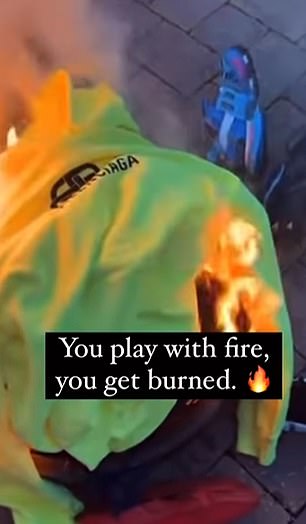 Meanwhile on social media, disenchanted consumers are burning their Balenciaga goods in protest

Critics said the two issues combined pointed to a pattern at the brand – an allegation it strongly denies.

Then, a closer look at that July photoshoot revealed a book in the background by artist Michael Borremans, whose other works include depictions of naked, castrated toddlers.

Instead, it says production company North Six and set designer Nicholas Des Jardins is to blame for those props making their way into the photoshoot.

But a source with knowledge of the photoshoot in Manhattan told DailyMail.com that no one from North Six was even present when the documents were placed in the frame behind a handbag.

‘Balenciaga wanted to keep it a closed set. North six staffers were not there for the final staging of those document photos,’ they said.

The only people present in the end were ‘two Balenciaga staffers, the photographer and a set assistant’.

It’s not uncommon for brands to limit the number of unessential staff allowed to be present at shoots involving high profile models.

In this case, Bella Hadid was the star of the campaign Balenciaga x Adidas campaign, and Nicole Kidman was also photographed for the ready-to-wear collection.

In the photo shoot, the kids also appeared surrounded by empty wine and champagne glasses.

The distinctly adult themes immediately troubled many who asked why children had ever been used.

Balenciaga ignored the scandal at first and seemingly allowed the photographer who was involved, Gabriele Galimberti, to take the heat.

He released a statement saying he had no control over the content of the shoot and eventually, Balenciaga released its own statement agreeing with him and taking responsibility for the campaign.

It has now been pulled from the internet. 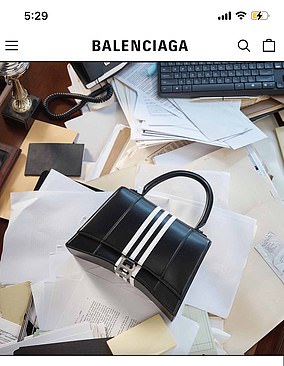 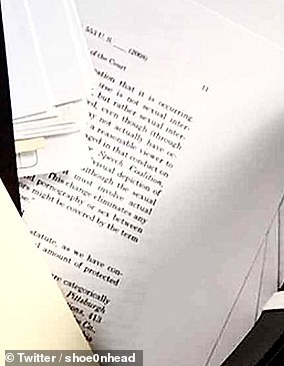 On the back of the bears scandal, many critics said it pointed to a troubling pattern within Balenciaga.

Balenciaga was quick to blame North Six, a production company that helped arrange the shoot, for the inclusion of those documents.

They claimed that they entrusted all of the props from the photoshoot to North Six, and that their team was assured everything that was included was fake.

Balenciaga is yet to answer for the inclusion of a book by Michael Borremans in the background of two of the images from the Spring ’23 campaign.

Borremans is a Belgian painter whose work includes a troubling 2017 series called Fire From The Sun.

It depicts naked toddlers – some of them castrated – playing in a group and at times alone.

Lawyers for the brand are yet to address DailyMail.com’s questions about how the book ended up on the photoshoot.

In this image from Balenciaga’s scrapped Spring ’23 campaign, Isabelle Huppert sits in front of a stack of books including one that celebrates Michael Borremans, a Belgian painter whose work is known to include depictions of castrated toddlers

Borremans’ other work includes his 2017 series Fire From The Sun, which features castrated toddlers and babies holding what look like severed limbs, while playing together nude in a large group