Banker who bought a home on remote Orkneys island LOSES £600,000 court battle against local shopkeepers after claiming they ‘abused’ their monopoly over the island, ‘intimidated’ outsiders and ‘turned residents against him and made life unbearable’

An international banker who got locked in a neighbours’ feud after buying a home on a remote Scottish island has lost out in a £600,000 court fight with the owners of a local shop.

Former banker-turned-investment chief executive Kenneth Murray was looking for the quiet life when he bought a historic listed house with extensive grounds on the tiny island of Sanday in the Orkneys, with a population of only 550, in 2013.

He embarked on an £800,000 renovation but found himself drawn into an ‘ongoing feud’ with Jackie and Malcolm Sinclair, the couple who ran a haulage firm on Sanday, as well as a local convenience store, one of only two on the island.

The neighbours’ rift, sparked by a row over payment of a bill, was exacerbated when Mr Murray banned two locals from mooring boats off a stretch of coastline opposite his house, and the Sinclairs banned Mr Murray’s workers from using their shop.

But the clash quickly spiraled downwards from there after another row, this time over parking and boat mooring rights off their land, which the Sinclairs insisted had been enjoyed by locals ‘for generations’ before the Murrays moved in.

In a scathing critique read in court, Mr Murray claimed the Sinclairs ‘had a vice-like grip on the island’ and would ‘encourage…others to harass and intimidate the people they have decided to victimise and force off the island’.

Claiming just under £600,000 in court, Mr Murray said the Sinclairs’ ‘abuse’ of their alleged monopoly had scuppered his chances of completing work on his house and effectively forced his family to leave the island.

But a judge has now thrown out the financier’s claim that his neighbours cost him a fortune by breaching competition laws.

Setting out the Sinclairs’ stance, judge Lord Ericht said there were ‘two sides to every story’, with the couple claiming to have suffered ‘ongoing vexatious bullying and harassment’ from Mr Murray, to the point they had decided to sell their haulage business and leave the island.

Spending nearly £1m on an ‘old manse which was never going to be worth more than a third of that was not a very smart thing to do’, claimed the Sinclairs, and they should not be held liable for Mr Murray’s losses. 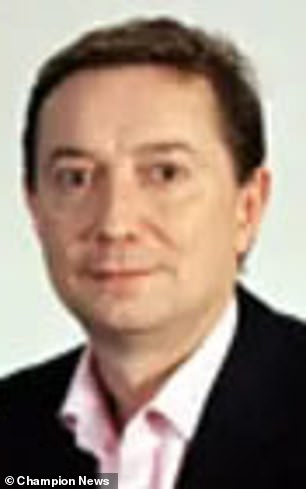 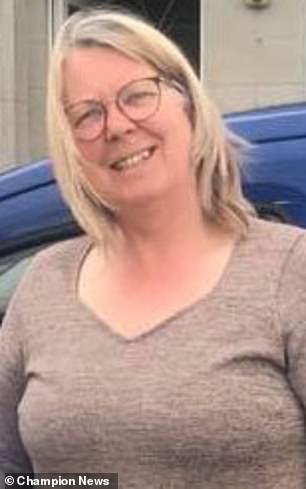 Loggerheads: Investment chief executive Kenneth Murray, left, was embroiled in a feud with his neigbour Malcolm and Jackie Sinclair, who is pictured right 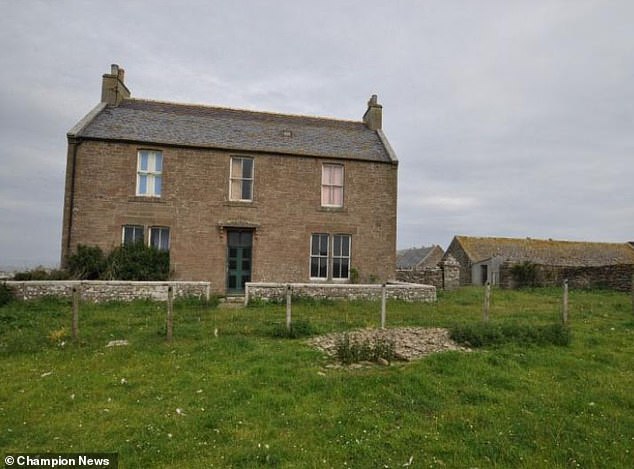 The Murrays arrived Sanday in the Orkneys in 2013 with the view of renovating this historic listed house on the tiny island, which has a population of only 550 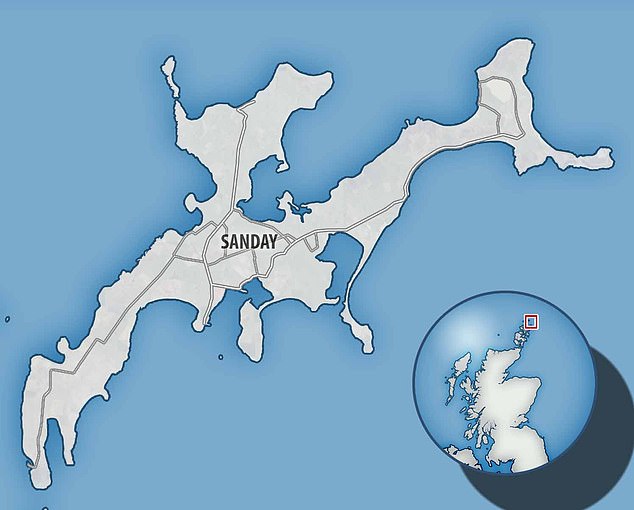 The tiny island of Sanday in the Orkneys, pictured, has a population of only 550 with just two shops covering it

He also founded The Bank of Edinburgh Group plc and the Bank of Edinburgh plc and was managing director of both companies until their sale in 1994, and was director of Fulton Prebon International Limited, one of the world’s largest money brokers with operations in markets including London, New York, San Francisco, Tokyo, Hong Kong, Singapore, Sydney, Bahrain, Luxembourg.

He and his wife bought six-bedroom Marygarth Manse on tiny Sanday – which covers less than 20 square miles – for £122,000 in 2013 through his Malta-based company and subsequently spent around £800,000 doing it up over the following eight years.

For several years, the incomers had a good relationship with the Sinclairs, using their haulage service to bring in vital materials for their renovation project and relying on the goods from their shop until the families clashed over payment of an international banking fee.

Things spiraled downwards from there after another row, this time over parking and boat mooring rights off their land, which the Sinclairs insisted had been enjoyed by locals ‘for generations’ before the Murrays moved in.

The Sinclairs told the Murrays they were barred from using their haulage services unless they relented in the boat mooring row after the incomers enlisted lawyers over the issue.

They also later banned workmen the Murrays had shipped in from off the island to work on their house renovation from using their shop, citing Covid rules.

In appointing Sinclair Haulage as the only haulier allowed to deliver goods from a freight depot to the island, the council and its ferry company had created a ‘monopoly’ and handed it to the Sinclairs’ company, he claimed.

In his ruling, Lord Ericht explained that Mr Murray claimed he spent a total of £944,729 to buy and do up the house, and is now having to sell it for only £375,000 because the Sinclairs have turned other islanders against them.

Describing Mr Murray’s position, the judge said the banker claimed the Sinclairs ‘deliberately defame and malign people’ in a bid to set ‘other locals against them’ before encouraging others to ‘harass and intimidate the people they have decided to victimise and force off the island’.

‘Mr Murray says that having endured years of appalling behaviour by the Sinclairs, the situation became so intolerable that we – by which we understand he means he and his wife – could stand it no more and were forced to abandon our plans of living on the island and decided to put our home up for sale,’ Lord Ericht said.

‘His wife would not take their children up there because the family had been subjected to terrible things, e.g. people parking at the end of the driveway watching them.

‘Instead of ringing the bell and delivering a parcel, people had broken into their car and hidden things under the seat like an IRA bomber. There were no police on the island. A lot of people had been doing things that left her feeling so uncomfortable that she and he did not want to live there.’

The judge described how Mr Murrary claimed the Sinclairs had a ‘vice-like grip’ on the island and had people who ‘did their bidding for them’.

Turning to the household refuse dispute, Lord Ericht said it had been sparked on June 24, 2019, when Mr Murray had complained to the council that his refuse had not been collected ‘and that it was not the first time it had happened’.

‘Mr Murray categorised this as an abuse of the Sinclair’s monopoly on collecting refuse on the island in order to punish and harass the Murrays.’ the judge said.

‘His position was that not collecting the refuse was part of the process of the Sinclairs’ defaming, harassing and persecuting the Murrays until such time as the Murrays could stand it no more and left the island, and was a vindictive and wholly improper use of a public service that had been entrusted to them.’

But setting out the Sinclairs’ stance, the judge said the couple claiming to have suffered ‘ongoing vexatious bullying and harassment’ from Mr Murray, to the point they had decided to sell their haulage business and leave the island.

‘The Sinclairs’ position was that Mr Murray was putting building rubble in the refuse, which Sinclair Haulage was not allowed to collect, and had been abusive to the driver,’ he said.

‘Sinclair Haulage carried out haulage services for several years for Mr Murray without complaint by him. There was a dispute as to the payment of an international banking fee and Sinclair Haulage stopped providing services until a large debt was cleared or sorted out.

‘In view of increasing harassment by Mr Murray of Sinclair Haulage’s staff and friends and neighbours, Sinclair Haulage informed him that they did not want to do business with him.’

Spending nearly £1m on an ‘old manse which was never going to be worth more than a third of that was not a very smart thing to do,’ claimed the Sinclairs, and they should not be held liable for Mr Murray’s losses.

Their haulage business had not been profitable and they had run it as a service to the island, they claimed, but had decided to sell it after clashing with Mr Murray.

It was also denied that their business had been the only one allowed to provide haulage services to the island, since there was one other firm which provided similar services.

The judge continued: ‘The jurisdiction of this tribunal is in competition law matters. It is not here to grant remedies for the breakdown of the personal relationship between the Murrays and the Sinclairs or for their conduct towards each other.

‘These proceedings are a claim for damages. If the pursuer has not made out a relevant case on damages, its claim must fail. The loss must be caused by the breach.

‘Mr and Mrs Murray’s reasons for the sale of the house are personal to the Murrays, rather than being reasons for a limited company to sell at a substantial loss.

‘On Mr Murray’s own submissions, the pursuer’s loss is caused by the breakdown of the personal relationship between the Sinclairs and the Murrays, rather than breach of competition law.

‘In our opinion, the pursuer has not set out any reasonable grounds on which it could be said that the…loss was caused by breach of competition law by the defenders,’ he concluded, dismissing the claim.