Martine Croxall has returned to presenting BBC News after being taken off air for 12 days for saying she was ‘gleeful’ during a report on Boris Johnson pulling out of the Tory leadership race.

The 53-year-old broadcaster sparked a backlash when she made the comments during an episode of The Papers on October 23, leading the BBC to launch an investigation.

The corporation found that Ms Croxall made ‘several remarks and reactions’ which caused a ‘significant risk’ that the audience could believe ‘opinions were being expressed’.

On Thursday, the corporation ruled the programme had failed to meet its impartiality standards after reviewing viewer complaints.

Returning to presenting BBC News on Friday, Ms Croxall failed to acknowledge her absence, opening the programme with a smile, saying: ‘This is BBC news, I’m Martine Croxall, the headlines at 11am.’ 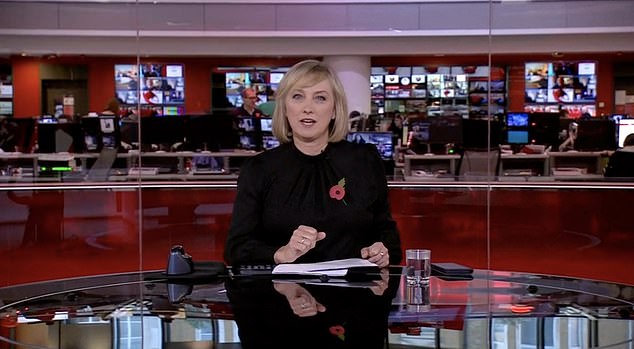 Returning to presenting BBC News on Friday, Croxall failed to acknowledge her absence, opening the programme with a wry smile, saying: ‘This is BBC news, I’m Martine Croxall, the headlines at 11am’

The presenter, who has worked at the BBC for almost 30 years, donned an all-black outfit complete with a poppy broach.

Twitter users appeared divided over the return of Ms Croxall on Friday morning, with one vowing to what her ‘like a hawk’, adding: ‘Any hint of bias from her and she’s done for.

‘There’s been no apology for breaking impartiality rules. She is shameless.’

Others were more supportive, saying it was ‘great to see her back’, while another said: ‘Good on you girl!’

The accusations of bias came during her introduction to the Sunday night edition of The Papers, in which members of the press and experts look at how the main stories of the day were covered, where Croxall said: ‘Well this is all very exciting, isn’t it?’ adding: ‘Am I allowed to be this gleeful? Well, I am.’

The programme started around 90 minutes after Mr Johnson pulled out of the Tory leadership race.

In her first question to her guests, Croxall also remarked: ‘Can we even show you the front pages just yet, have they arrived? No they haven’t arrived.

‘It’s all a little bit, you know, lastminute.com isn’t it? Because all the front pages were probably out of date by the time we received them.’

The episode also saw Croxall suggest that her comments could have breached BBC guidelines.

Responding to a guest’s joke aimed at Mr Johnson, she said: ‘I shouldn’t probably (laugh). I’m probably breaking some terrible due impartiality rule by giggling.’

Some viewers, including several Tory MPs, reacting to a clip on social media, complained it displayed bias.

Former culture secretary Nadine Dorries said on Twitter: ‘This lack of impartiality demonstrates how deep-seated the bias is.’ 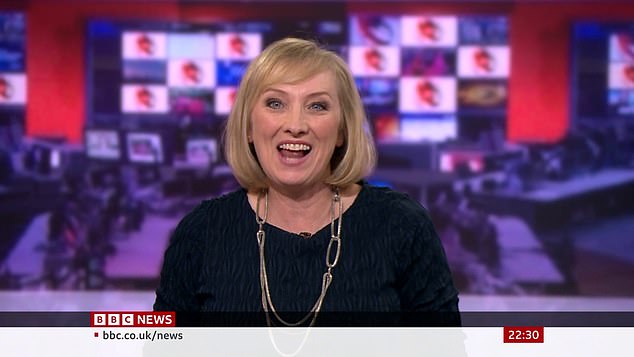 BBC News presenter Martine Croxall presenting the Newspaper Review on BBC News channel and of Boris Johnson’s decision not to run, saying with a big smile: ‘Am I allowed to be this gleeful? Well I am’

The BBC said in a statement: ‘In this programme several remarks and reactions from the presenter caused a significant risk that the audience could believe opinions were being expressed on the Conservative leadership contest.

‘In addition, there was insufficient counter and challenge to some of the opinions expressed by guests on the programme.

‘Taken together, this meant that this edition of The Papers did not meet our editorial standards, as it gave the audience the opportunity to infer an editorial position on the part of the BBC.

‘This does not accord with the BBC’s commitment to editorial impartiality.’

The corporation told MailOnline that it does not comment on individual staff matters.

Outraged viewers at the time demanded action from regulator Ofcom – or that she is sacked by the BBC. 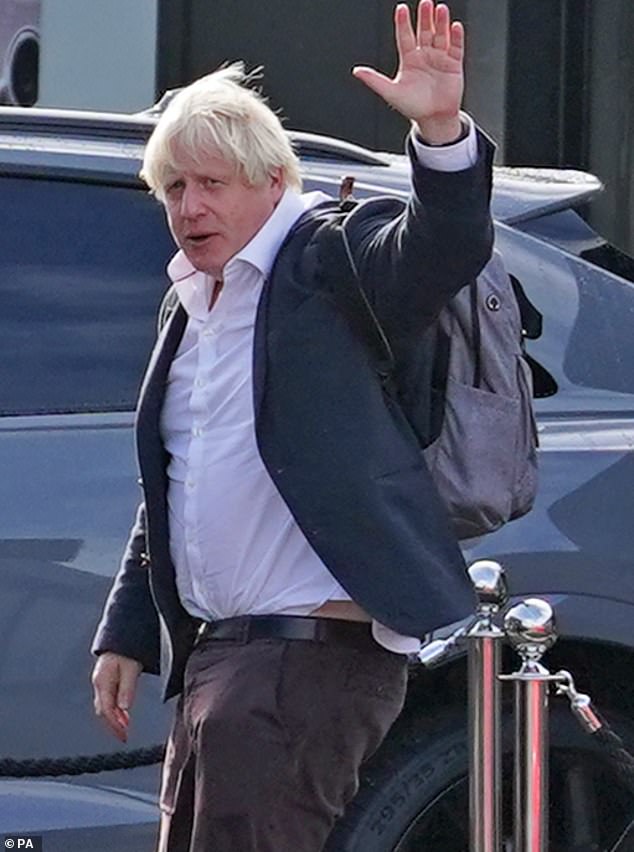 Former Prime Minister Boris Johnson arriving at Gatwick Airport in London, as he announced he would not stand for the Tory leadership 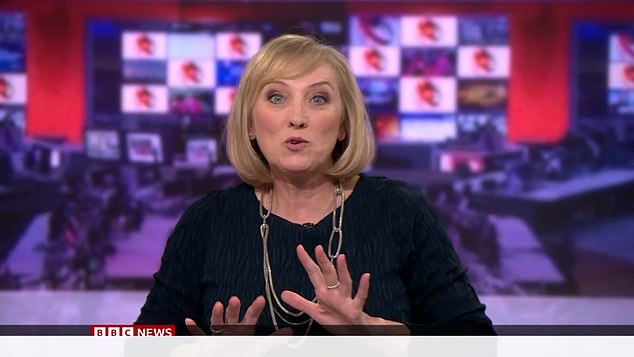 Ms Croxall never commented on specifically what she was ‘gleeful’ about during the show.

She was suspended from live programming following the incident while the BBC looked into whether she had breached impartiality guidelines.

The episode also saw Ms Croxall suggest that her comments could have breached BBC guidelines.

‘He probably thinks he is best placed to win the American election in 2024.’

Responding to the joke aimed at Mr Johnson, she said: ‘I shouldn’t probably (laugh). I’m probably breaking some terrible due impartiality rule by giggling.’

Who is Martine Croxall?

Martine has been a journalist with the BBC for almost 30 years.

She first joined BBC Radio Leicester in 1993 before moving to BBC’s London base to join its regional team covering the south-east.

But since May 2021, she has been a presenter on the BBC News Channel and BBC World News often appearing on air between Thursday and Sunday.

In 2015 she was praised for her coverage of the terror attack in Paris.

The journalist was also championed in April, 2021, when she tearfully broke the news of Prince Philip’s death.

A technical gaffe in January 2020 saw Ms Croxall going viral when a rogue camera panned past her during a live broadcast.

Away from the news, as Ms Croxall was crowned Celebrity Mastermind in March, storming to victory against the likes of The Vivienne from Ru Paul’s Drag Race, presenter Maria McErlane and DJ, Ace.

Some viewers, including several Tory MPs, reacting to a clip on social media, complained it displayed bias.

On that Sunday, Mr Johnson claimed he had the nominations needed to make it on to the ballot paper but admitted he could not unite his warring party.

The former prime minister said there was a ‘very good chance’ he could have been back in No 10 by the end of the week if he had stood.

However, his efforts to ‘reach out’ to his rivals, Rishi Sunak and Penny Mordaunt, to work together had not been successful so he was dropping out.

The news broke late into the evening leading to a scramble at newspapers across the UK to rethink their planned edition.

The BBC issued a statement the morning after the segment aired saying it was ‘urgently reviewing’ the programme.

Many online criticised the newsreader after watching the segment, claiming her reporting was not impartial.

The Mail understands that Deborah Turness, who became the BBC’s new chief executive of news and current affairs last month, was integral to the decision to take swift and ‘robust’ action in Ms Croxall’s case, and that she regards the issue as incredibly serious.

A BBC insider suggested that Ms Turness, former chief executive at ITN, regarded the incident as very ‘frustrating’ given the lengths to which the corporation has gone to remain strictly impartial during a tumultuous political period.

It comes after many Conservatives have claimed in recent months that the BBC is not unbiased and has gone ‘woke’ – though critics say this is not the case and the BBC are simply holding the government to account for their actions.

The corporation and other media outlets were particularly criticised for their reporting during the Partygate scandal which ultimately helped topple Boris Johnson as PM.

It was claimed by Conservatives that coverage was unfair. Later, it was confirmed that both Boris Johnson and then-Chancellor Rishi Sunak broke lockdown rules and were fined by police.

It is not the first time Ms Croxall has made the headlines due to an on-air gaffe: in January 2020 she was involved in a blunder which quickly saw her go viral online.

As she started to read the top stories of the day, the camera panned straight past her to the news desk, in a humiliating gaffe.

‘Hello everybody, this is Afternoon Live,’ the presenter began, before she disappeared as the camera zipped straight past her.

‘I think that’s the safest thing to do. Do excuse me, I shall tell you all about our story in just one second.’

In the aftermath of October’s incident, former culture secretary Nadine Dorries accused Ms Croxall of bias and said on Twitter: ‘The BBC is a public service broadcaster paid for by the general public who overwhelmingly voted for a Conservative government.

‘This lack of impartiality demonstrates how deep seated the bias is.’

Ex-prime minister Theresa May’s former joint chief of staff Nick Timothy tweeted: ‘Whatever you think of Johnson, if you care about the BBC you cannot think this is in any way acceptable from one of its presenters.’