A parking lot at one of Perth’s most popular beaches, in the middle of winter, is not the first location one might think of when looking to relax.

But Fremantle local Brigid Marciano decided it would be the perfect time and place for exactly that — converting a shipping container into a sauna for the public to hire out down at South Beach. 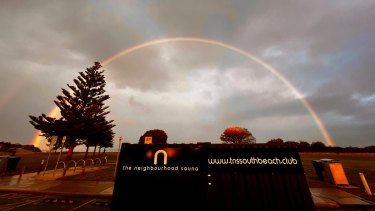 The shipping container, transformed into the first traditional dry Finnish sauna situated on the beach in Perth, was given the green light by Fremantle council.

Marciano, who also owns the Neighbourhood Sauna on South Terrace, said when she had first pitched the idea to Fremantle council they had probably thought it was the “weirdest request they’d ever had”.

But the container, transformed into the first traditional dry Finnish sauna situated on the beach in Perth, was given the green light.

It has become so popular that Marciano said she hadn’t even needed to market the idea to the community to get them on board.

“Usually people don’t head down to the beach in winter, but there is something so magical about being there at this time of year that people often miss,” she said.

“Sitting in the sauna and then stepping outside into the rain or the cold showers, or running down into the ocean to cool off, just being in the elements like that, is incredibly therapeutic.

“We started hiring the sauna out at the beginning of June and I would say about 500 people have already used it. We are usually booked out on Thursday, Friday and Saturday every week.”

Patrons book the sauna in hour-long blocks from 7am to 4pm, with the container’s opening facing out across the grass to the beach and ocean.

Marciano worked with local company Alchemy Saunas and decided on the shipping container design that was “synonymous with Fremantle”.

“It took only a few weeks to build, I think the most challenging thing was getting a shipping container that we could use, with supply so low because of COVID disruptions,” she said. 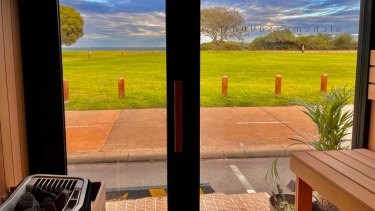 A view from inside the sauna, overlooking the beach.

“I’m so glad it all worked out … the council only approved the container for the winter months but I would love to make this an all-year experience.

“I have also put an application in to another council to get the same thing running at City Beach, and I am in discussions with the council down in Margaret River too.

“All this is dependent on how well the South Beach sauna does, but so far it is looking very positive. Maybe one day I could take this idea nationally. That would be the dream.”