Dairy workers at Bega’s Bentley site in Perth have walked off the job in a pay dispute.

The United Workers Union says the company has offered a 2.75 per cent annual pay rise, well below inflation. 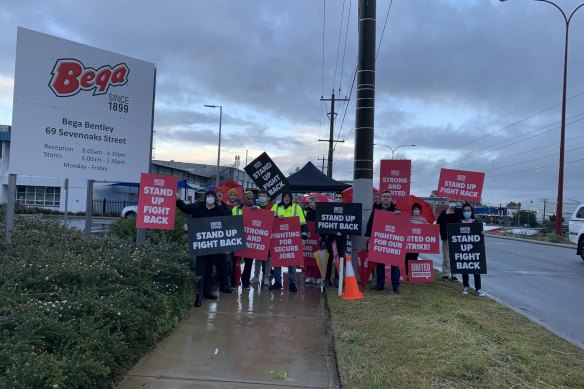 Bega workers on strike outside the company’s Bentley plant on Monday.Credit:United Workers Union

It says strike action will continue until Bega returns to the bargaining table with an offer that brings workers into line with their colleagues at its east coast dairies.

Images on social media on Monday showed a picket line outside the Bentley plant. Union co-ordinator Louise Dillon said there was a need for a rebalance between the profits of corporations and the take-home pay of WA workers.

“Here we have a bunch of workers who showed up during the height of the pandemic and when our supply chains were under immense pressure to make sure the supermarket shelves were still stocked with milk,” Ms Dillon said.

“You can’t just keep trading on the good faith of workers when recording huge profits and paying out dividends to shareholders.”

As well as the wage claim, the union is seeking a better path to permanency for casual workers.