Belarus soldiers are cutting holes in Polish border fence and doing ‘everything they can’ to help migrants reach the EU but dozens have already frozen to death in woods, aid workers claim

Belarusian soldiers are cutting holes in Poland’s wire border fence to allow migrants to sneak through, MailOnline has been told.

Troops approach the fence at night before using cutters to make gaps that people can then sneak through, a local aid worker has claimed.

That has allowed hundreds of people to illegally enter the EU since Monday, with a police source saying 400 made the crossing last night alone.

Refugees from Iraq and Syria said Belarus’s troops are doing ‘everything they can’ to help them reach Western Europe, but aid workers added that ‘dozens’ have still frozen to death in woods waiting to cross. 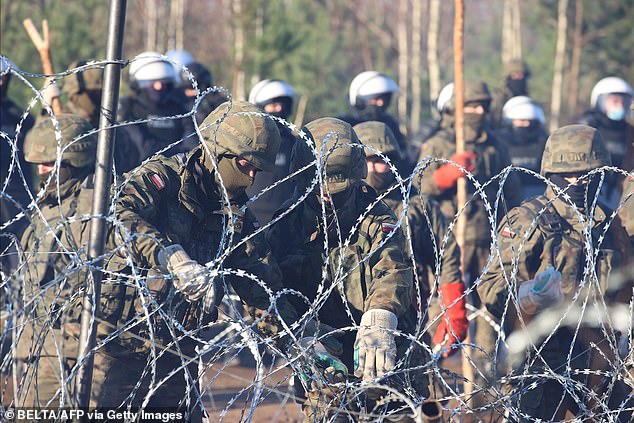 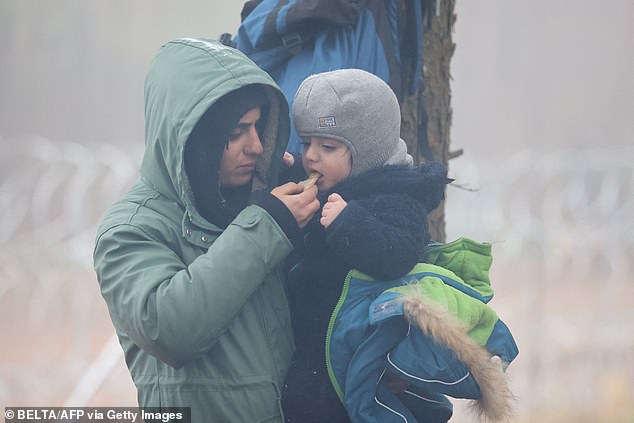 Hundreds of migrants are making it across each night with Belarus doing ‘everything it can’ to help them, refugees claimed (pictured, a woman at the border) 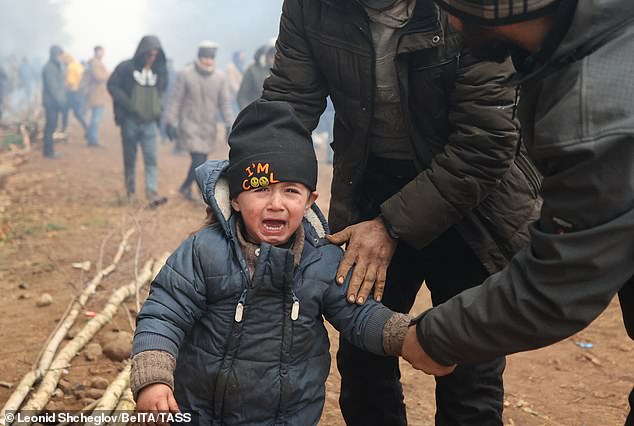 Despite the crossings, aid workers claim that ‘dozens’ of people have frozen to death while waiting to cross (pictured, a child in a camp on the Belarus side of the border) 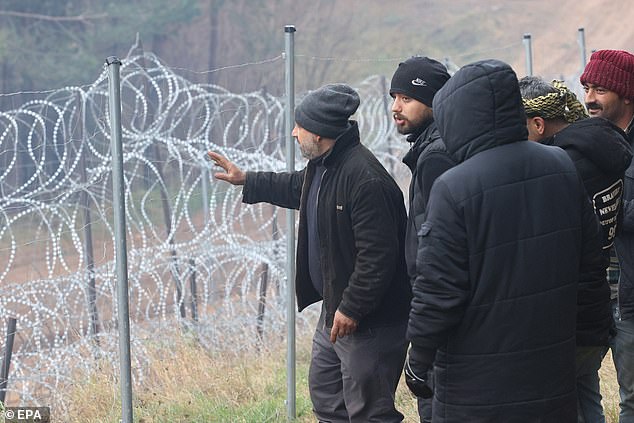 Poland says it has arrested hundreds of the migrants and is hunting for others, adding that it has an ‘obligation’ to protect the EU’s eastern border.

Thousands of migrants are currently camped along the border, in what the EU says is a calculated plot by Belarus to destabilise the bloc.

European leaders accuse dictator Alexander Lukashenko of luring vulnerable people to his country on the promise of passage to Europe, before forcing them to the border and preventing them from returning to Belarus.

Blocked by Polish border guards, the migrants are left in a freezing no-man’s land with little food or water.

The EU says the plot is revenge for sanctions imposed on Lukashenko’s regime and for supporting pro-democracy protests against him.

Speaking to MailOnline about the situation on the ground, a welfare officer said: ‘Belarus soldiers cut holes in fence to help the refugees get through, the refugees have told me.

‘This is happening every night. They use wire cutters and then leave on the ground for anyone to see.’

She added that dozens of migrants have perished trying to make it to Poland.

She said: ‘There are bodies of refugees lying in the woods. Nobody know how many people have died.

‘But as the temperature goes below zero at night we are not surprised to hear that people are freezing to death.’

A police source today confirmed that 400 migrants crossed the border near Bialowieza between Wednesday night and Thursday morning.

The village has been sealed off to everyone who does not live there including aid workers and journalists.

The source told MailOnline: ‘Last night 400 crossed the border illegally into Poland. The night before it was 200. The Belarus army is helping them of course.’

Lukashenko, with the backing of Moscow, denies orchestrating any kind of plot and says the migrants are legitimate asylum seekers who should be allowed through.

On Thursday, he threatened to shut off the gas supply to Europe if the EU threatened fresh sanctions against his regime.

Meanwhile Putin has shown support for his ally by flying nuclear-capable bombers over Belarus for a second day in a row.

Both Putin and Lukashenko say they are ‘concerned’ by Polish troop movements near the border, with Warsaw saying there are now 15,000 soldiers stationed there.

Lukashenko has warned the situation could easily escalate into a direct confrontation, with Russian military expert Pavel Felgenhauer saying that Moscow would likely send its forces into Belarus in the event of a conflict.

Meanwhile western countries would be compelled to defend Poland if it was deemed to be under attack, because the country is in NATO whose members have a mutual defence pact.

The defence minister of Lithuania, Estonia and Latvia – also NATO countries – issued a joint statement today warning that the situation risks boiling over.

Referencing the migrant crisis, they said: ‘It increases the possibility of provocations and serious incidents that could also spill over into the military domain.’

Meanwhile Ukraine, which it not a NATO or EU member, rushed thousands more troops to its border fearing it could also become a target for migrants.

Ukraine will deploy another 8,500 troops and police officers, and 15 helicopters, to guard its border with Belarus, the interior minister said today. 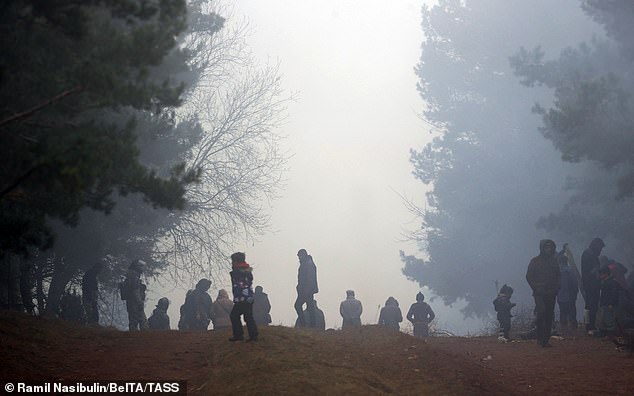 Europe says the migrants were lured to Belarus on the false promise of passage to the EU, then dumped in freezing cold woods with no route forwards or back 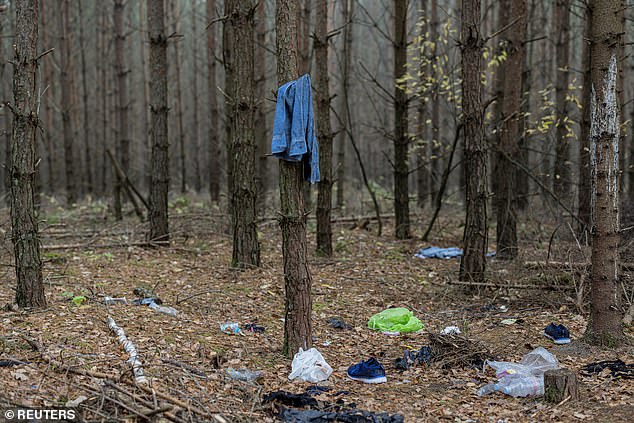 Migrants are being forced to scratch out a living in woods with barely any food or water, in freezing cold conditions (pictured) Polish border guards search vehicles near the frontier for stowaway migrants, with locals facing fines or prison terms for helping them

Denys Monastyrskiy said the new forces would include 3,000 border guard servicemen, 3,500 servicemen of the National Guard and 2,000 police officers.

‘Interior ministry aviation will also be on duty, in particular 15 helicopters, which will ensure mobility and, if necessary, will transfer our forces to the border,’ he said.

Monastyrskiy said earlier on Thursday that Ukrainian border guards, police and the national guard would hold drills on the border with Belarus.

‘In order to counter the potential crisis with migrants, we will involve all five structures of the Ministry of Internal Affairs without exception,’ the minister was quoted as saying in the statement.

Ukraine is already fighting a proxy war with Russian-backed separatists on its eastern border,  and has warned that Putin is massing troops close by.

Meanwhile the EU began outlining a fifth wave of sanctions against Lukashenko’s regime today which would target top-ranking officials and the state airline Belavia which ministers say is being used to bring migrants into the country.

A follow-up sixth sanctions package could then be used to ban EU supplies from being used at Minsk National airport, while including assets freezes and travel bans for more members of the regime.

One senior diplomat said the sanctions on Minsk airport could choke off EU financing, supplies and equipment. Germany’s Lufthansa Cargo is a ground and cargo handler at Minsk National, according to its website.

An extraordinary EU summit of the bloc’s 27 leaders is under consideration, while the bloc is also debating whether to use its common funding mechanisms to build more border fencing.